SUPERMARKET shoppers can save big by heading down aisles they wouldn't typically browse where shops often stash products for less.

World food and baby aisles are two key supermarket departments where shoppers can typically find the same or similar items for less. 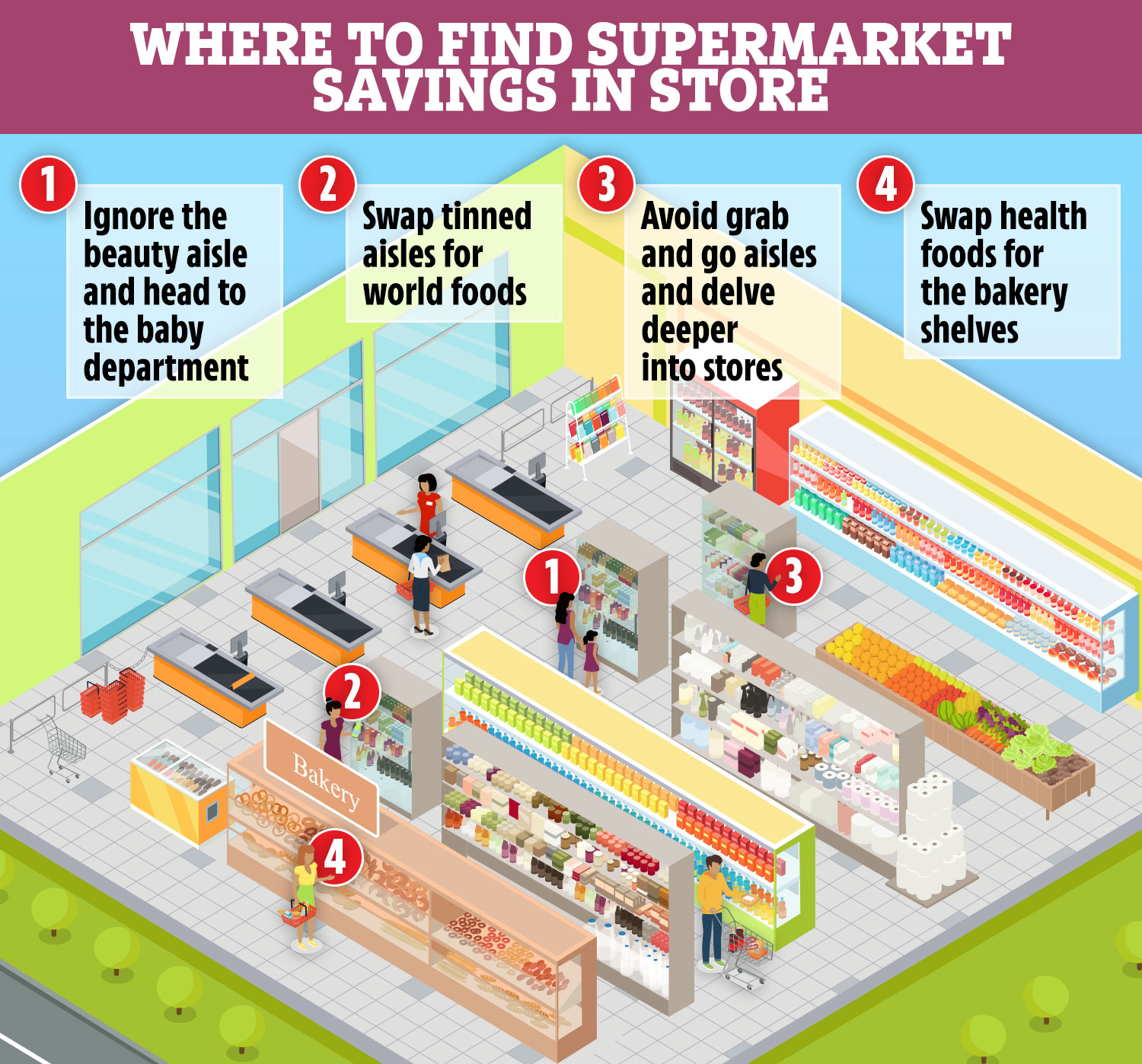 According to new research by the Daily Mail, Morrisons, Sainbury's, Tesco and Waitrose sell items including cotton buds, apple juice, and chickpeas for varying prices depending on where you pick them up from in store.

And sometimes these differing prices can be just metres apart.

Deborah Shanahan, deals and features editor at consumer site MoneySavingExpert.com, told The Sun: "If you know where to look, you can often bag grocery items cheaper somewhere else in the same supermarket, sometimes even the same shelf.

"This is just one of many tactics supermarkets employ to help us part with our cash."

To help you better navigate your grocery shop, we've used the Daily Mail and MoneySavingExpert.com's research to highlight where you're most likely to find bargains in stores.

Head to the baby aisle for beauty buys

Baby aisles seem to be the best bet for cut-price beauty products.

The Daily Mail's investigation found a packet of 200 cotton buds in the beauty aisle at Morrisons for 70p but head to the baby aisle and the same sized item was 20p less at 50p – a 28% saving.

Consumer site MoneySavingExpert.com had similar results when it checked the price of cotton buds, cotton wool balls, and cotton wool pads at Boots and Tesco in 2017 and then again in 2018.

How to cut the cost of your grocery shop

MONEY.CO.UK has shared some top tips with us to help you keep your supermarket spend down to a minimum.

Of course this research is now dated but in each case it found that items in the baby aisle cost less than elsewhere in stores.

The consumer site also found you could save by swapping related items to those found in the baby aisle.

Ms Shanahan told The Sun: "Supermarkets often charge a premium for items in the beauty aisle versus near identical items found in the baby aisle."

World foods is your best bet for tins, herbs and spices

When it comes to non-perishables it seems the world food aisle is your best bet for tins, herbs, and spices.

The Daily Mail found Sainsbury's was selling an own-brand 400g tin of chickpeas for 55p in the tinned food aisle, while you could snap up a different 400g tin for 45p in the world food aisle – a 10p (22%) saving.

Again, this is backed up by MoneySavingExpert.com research carried out in 2017 and again in 2018, which found cooking sauces, dried herbs, spices and more up to 80% cheaper in the world food aisle.

Avoid grab and go aisles at the front of stores

Grab and go sections at the front of supermarkets and around tills are notorious for ripping shoppers off as you're paying for the convenience of not having multiple items to carry and store, or for items to be chilled.

But if you're not fussed about this and you have a bit more time on your hands to delve deeper into stores then you're likely to save.

Supermarket loyalty schemes – which has one?

MOST UK supermarkets have loyalty schemes so customers can build up points and save money while they shop.

Here we round up what saving programmes you'll find at the big brands.

On a similar vein, a litre of chilled apple juice from concentrate in Waitrose was 95p in the chilled drinks section compared to just 90p if you delve into the non-refrigerated soft drinks and juice aisle. That's a 5p or 5% saving.

Waitrose says some products used in the Mail's comparison are slightly different, while its larger pack sizes can offer customers better value.

You're also better off hunting for healthy treats in the bakery aisle compared to the health foods section.

The supermarket told The Sun that sometimes bigger packs offer better value for customers, as is the case for its own-brand walnuts.

But bear in mind the bakery section didn't come up top trumps every time.

Be wary of the 'free from' shelves

Ms Shanahan told The Sun that shoppers should also be wary of the "free from' shelves for those suffering from certain food intolerances.

She said: "If you’re gluten-free, don’t make the "free from" aisle your first stop as you could pay a premium.

"Gluten-free products are dotted all around the supermarket, often without the hefty price tag – just remember to always read the labels carefully.”

Another tip from MoneySavingExpert.com is to check the bottom shelf as you could find larger versions of the same product that are better value.

It found ten branded items, including Heinz and Yorkshire Tea, that were better value based on grams on the bottom shelf compared to items at eye-level.

Again, its research is now slightly dated as it's from 2018 but it says the principle still stands stand.

Ms Shanahan said: “Stores tend to place more expensive items at average eye-level height, hoping we’ll grab and go. Crouch down and you could find bigger packs of the same brand, meaning more for your money per 100g/ml."

Another trick is to check the ingredients as last year we found supermarkets selling near identical products but charging more than double for own-brand items compared to value ranges.

We also spoke to one mum who's saved hundreds using scanners in Asda and Tesco to find discounts that aren't listed on shelf prices.

The Sun has contacted Morrisons and Tesco.