For almost the whole history of cinema, filmmakers have been telling stories about outlaw couples – one recent example being this year’s overlooked Queen and Slim, which reimagined the trope for the era of Black Lives Matter. 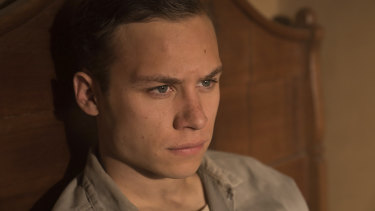 Dreamland is less obviously topical. Indeed, reports indicate it was shot back in 2017 – when its director, Miles Joris-Peyrafitte, was still in his mid-twenties – and has been sitting on the shelf ever since. On balance it’s isn’t hard to see why, though Margot Robbie as an alluring Depression-era bank robber isn’t the worst starting point for a piece of entertainment.

Robbie’s character Allison Wells is already a fugitive from justice at the start of the story, which is told from the viewpoint of Eugene Evans (Finn Cole), a mopey Texan farmboy at odds with his lawman stepdad (Travis Fimmel) and addicted to pulp magazines.

When he stumbles upon the glamorously bloodstained Allison hiding out in the family barn, she might have well have fallen from the sky – and after joining her for a swim in the moonlight and listening to her rhapsodise about her idol Billy the Kid, he’s all in on the rebel dream.

The title hints that Eugene is destined to learn a harsh lesson about the difference between fantasy and the real world. But whatever screenwriter Nicolaas Zwart originally had in mind, Joris-Peyrafitte’s flashy style has less to do with reality than with earlier movies, especially landmarks in the lovers-on-the-run genre. 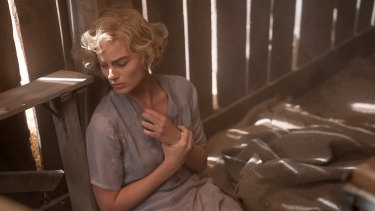 Robbie plays an alluring Depression-era bank robber, hiding out in a barn.Credit:AP

A robbery sequence filmed in a single take pays tribute to the hardboiled classic Gun Crazy, while the voiceover narration by Lola Kirke, as an adult version of Eugene’s younger sister Phoebe, has the flat wistfulness of Sissy Spacek in Badlands. More surprisingly, the squared-off framing and lateral tracking shots suggest a study of modern film school favourites like Wes Anderson and Bong Joon-ho.

While all this might be taken to signal a facetious distance from the material, irony and cynicism are curiously absent. Allison has innocent blood on her hands, yet the film treats her more sympathetically than not, while vacillating on the question of whether she’s fundamentally broken or a force of nature living her best life.

Robbie’s game (if never wholly successful) efforts to resolve the contradictions in this character are the main attraction of Dreamland – which she also co-produced, and which like several of her recent vehicles can be taken as a parable about her own stardom.

Eugene is essentially Allison’s adoring fan, rather than an equal partner in crime. But even if we never quite credit her feelings for him, it’s entirely believable he’s smitten with her – and whether or not she’s to blame for manipulating the kid, we can hardly blame him for falling under her spell.