MARTIN Lewis’ MoneySavingExpert has urged households to claim a £5,000 voucher before the green homes grant scheme closes in two days.

Brits can apply for up to £5,000 in Government help to install extra insulation, eco-friendly boilers, or even draft-proofing and double glazing under the Green Homes Grant scheme. 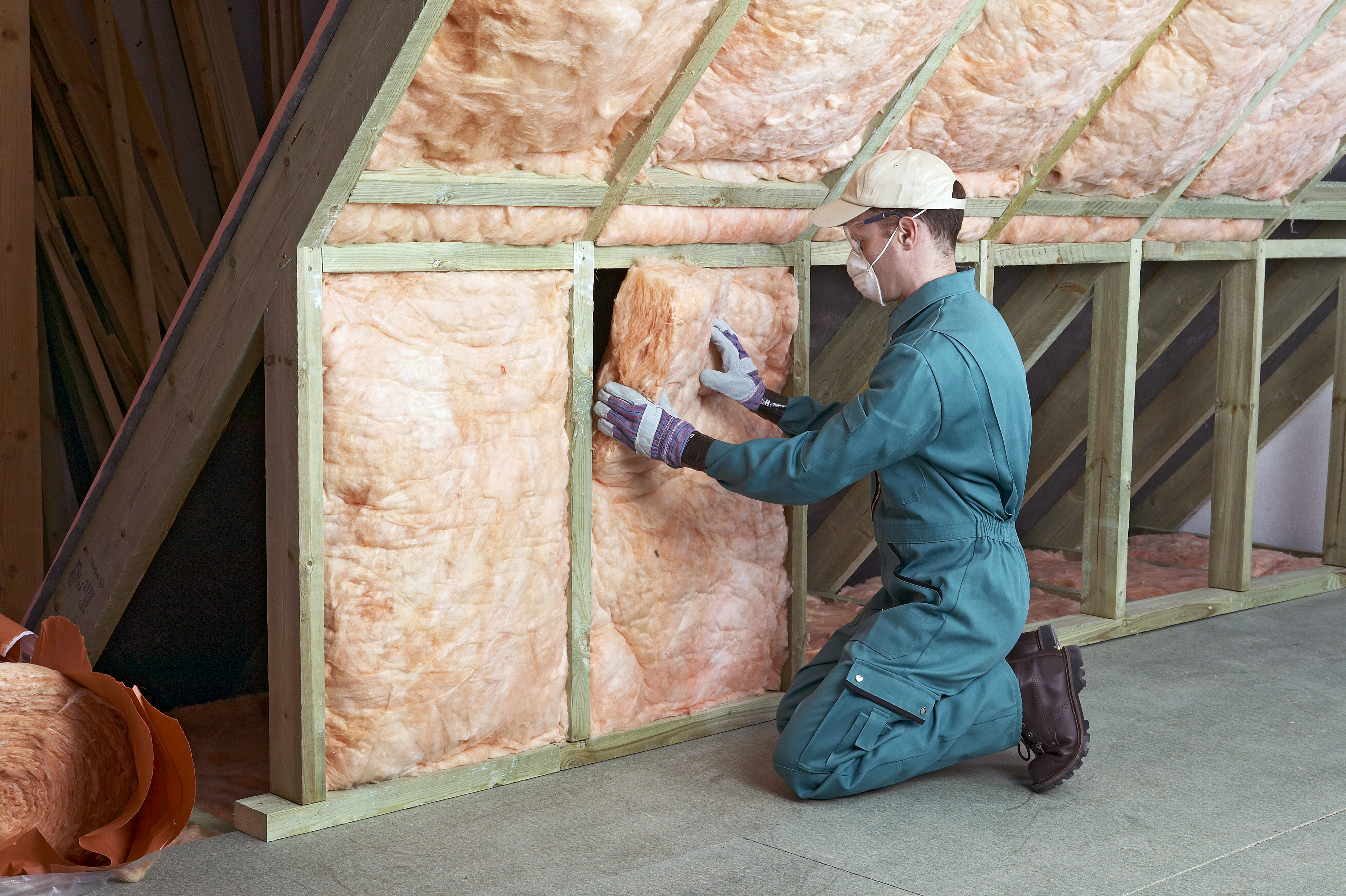 The scheme officially opened in September last year, but after being plagued with difficulties since its launch, it has now been axed just six months later.

Announcing the news on Saturday evening, the government said the scheme will be closed to new applicants on Wednesday (March 31) at 5pm.

It said the scheme was only "designed to provide a short-term economic boost", but that you'll still receive your vouchers if you've already been awarded them.

However, for those yet to put in a claim, MoneySavingExpert has warned that you should act immediately.

But with such a tight deadline in place, deputy editor Guy Anker told The Sun that families may lose out on securing the cash – even if they act now.

This is because Brits must first find a certified tradesperson to inspect the work that needs doing, get a quote from them, and then use this information to apply online – all within two days.

But concerns have previously been raised about the length of time households have to wait in order to find tradesmen accredited by the scheme who are able to do the work.

Only one in six homes have been able to find installers accredited by the scheme, according to MoneySavingExpert’s founder Martin Lewis.

MPs also expressed grave concerns earlier this year about the lack of engineers taking part in the scheme able to do the work.

Mr Anker said that these delays coupled with the tight deadline to apply to the scheme means many Brits could end up losing out on thousands.

“That crucial step of getting someone round to size up the task and get your a quote is what makes this deadline very pressing,” he said.

“There is a chance that a lot of people reading this now, who want to do it, will miss out, even if they did everything by the book.

“It is such a short window between the announcement and the deadline, just four or five days.

“So yes, lots of people who may have taken advantage of the scheme may miss out – and yes, it’s a blow for them.”

Environmental experts have slammed the government’s decision to get rid of the scheme.

UK Green Building Council has said it has been left “speechless” by the news.

Its chief executive Julie Hirigoyen said: ““From start to finish the scheme has been beset by problems of Government’s own making.

“But these should have been fixed, not used to justify its scrapping.”

Brits have also taken to Twitter to slam the decision. 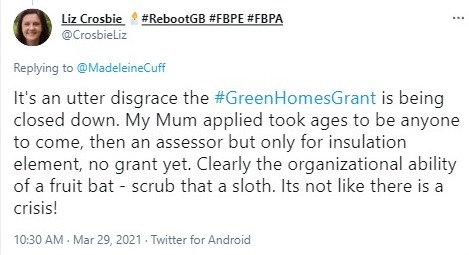 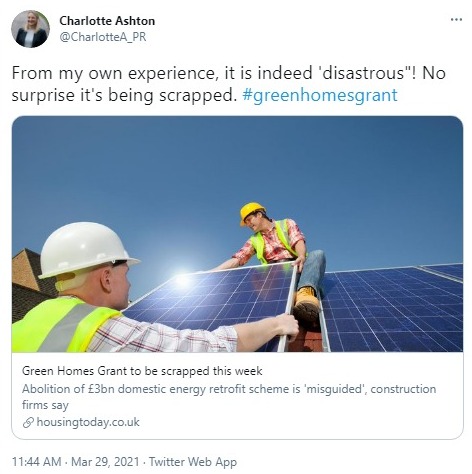 One said it was an “utter disgrace” that the scheme was being shut down, while another said it was “too complicated for most householders to work their way through”.

Another said that in their “disastrous” experience, it’s “no surprise” that the scheme was scrapped.

Rumours have been circulating since last month that the scheme could be in jeopardy.

Martin Lewis warned Brits to apply for the vouchers as soon as they can, or lose out.

The concerns followed news that the government was planning to slash the scheme’s budget by over £1billion.

As of January 22, just 20,000 vouchers totalling £71million had been dished out – a fraction of the £2billion which was budgeted for the overall scheme in last year’s spending review.

Martin Lewis called the Green Homes Grant a flop as only 1 in 6 homes able to find installers.

Meanwhile, homeowners have branded the scheme as ‘a joke’ as they struggle to find tradesmen accepting the vouchers.

Green Homes Grant scheme: How to apply and how it works explained.