Shearhold co-hosted Nova's national drive program with Kate Ritchie and Tim Blackwell but hung up the headphones in September in need of a change after 10 years in the role. 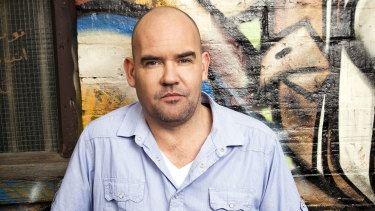 Sheargold, who has lived in Melbourne for three decades, described his new gig, which starts in January, as the job of a lifetime.

"These sorts of opportunities are few and far between," he said. "You can really wake up and talk to the city you live in. In a national drive job if you were to dig down into a local story it really needed to have a comedic bent or, quite frankly, nobody cared about it."

The high-profile appointment marks a return to Triple M for Sheargold. Prior to working at Nova, he co-hosted Triple M's Sydney breakfast show with Fifi Box. This means the comedian is all-too familiar with the network's sports loving audience. He also thinks his easygoing brand of comedy will help ease Melburnians' blues after spending months in lockdown.

"I love the AFL so I'll be talking about that, don't worry," he said. " I think we'll be aiming for a past player to come and break those stories with us. Someone with a bit of credibility in that area, as opposed to a bloke [like myself] who's 50 and never played a game of AFL."

But he is he a morning person?

"I am now," Sheargold said.

The comedian will take over from Collingwood Club president and Hot Seat host Eddie McGuire, who has been a familiar voice for Triple M's Melbourne listeners for more than a decade. The broadcast veteran announced he needed some time to "reflect and recharge" last month. McGuire's co-host, former AFL player Luke Darcy, is also leaving the breakfast timeslot.

Darcy will continue to work for Triple M's AFL call team but it is unclear what kind of role McGuire will land in the new year.

Dave Cameron, the chief content officer for Southern Cross Austereo, said highlights from Sheargold's program would be syndicated across Triple M's 49 stations between 3pm and 4pm weekdays. Cameron set the bar high and said the show would be "unlike any other".

"Melbourne at breakfast and Australia in the afternoon is about to experience one of this country's finest comedians and broadcasters with a show guaranteed to be unlike any other," he said. "2021 cannot come quick enough."

In the last radio ratings survey for 2020, Triple M netted a 6.8 per cent share of Melbourne's breakfast radio market. The result placed it ahead of Fox (6.6 per cent) and Nova (6.3 per cent), but behind Gold's Christian O'Connell who has a 7.5 per cent share.

The Marty Sheargold Show will debut on Triple M on Monday, January 18.