Meet the women who say their Savannah cats are purrfect

Take a walk on the wild side! They look like leopards, can cost up to £16,000 and are prone to destructive hissy-fits. As a Savannah cat terrorises a posh neighbourhood, meet the women who think their moggies are just misunderstood

When horrified residents in an affluent London suburb reported sightings of a large cat roaming the area, everyone thought a cheetah was on the loose.

The large, lean, muscular feline, with distinctive spotted fur, was seen in the back garden near ‘Billionaires’ Row’, in North London, where sheikhs and princes keep vast mansions.

But this big cat — still on the loose — is believed to be a Savannah, an exotic cross-breed of the wild African serval (which hunt down rodents and reptiles in the Serengeti) and a domestic feline.

The first known Savannah kitten was born in 1986, after an unsuspecting domestic Siamese cat was ‘introduced’ to a fearsome suitor in the U.S. The breed went on to be introduced into the UK in the late 1990s. 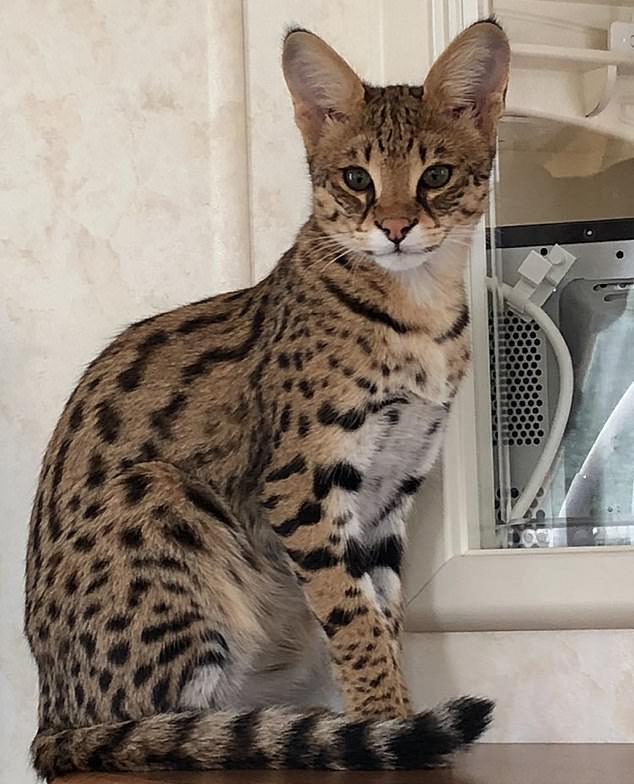 The animals were then registered by The International Cat Association, and have become much sought-after, costing up to £16,000 a time.

Each one is given a filial — or F — number that shows how much wildcat DNA the cat has. First-generation Savannahs — F1s — are 50 per cent serval, with the males measuring up to 22in tall and weighing as much as 25 lb.

In the UK, F2, F3 and F4 Savannah cats are classed as domestic but it’s illegal to own an F1 unless you have a dangerous wild animal licence. The cat on the loose in London is thought to be an F2 Savannah — a quarter serval.

While they look ferocious, some fans claim they’re big softies.

On walks, people ask if they are baby leopards

Sarah Cooke, 50, lives in Devon with her husband and their two children. They have an F2 male, Khomani, and an F2 female, Zahara. She says: 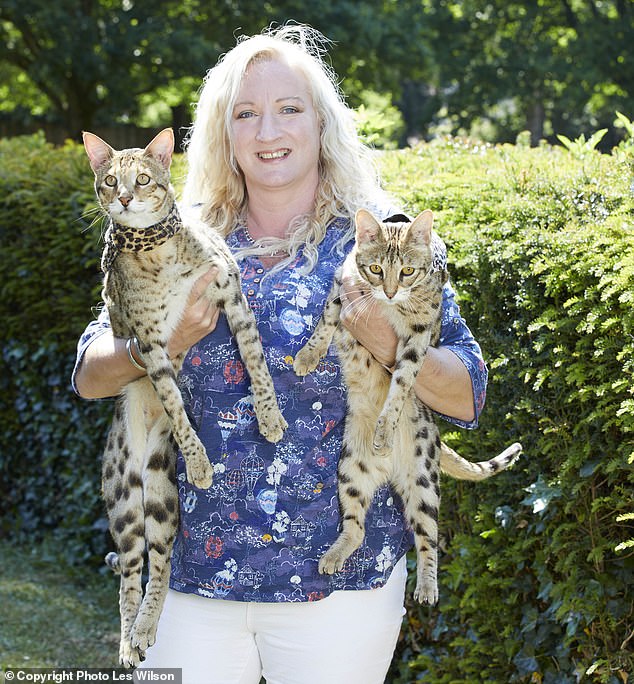 I take Khomani and Zahara out once a week on harnesses, avoiding anywhere we are likely to see dogs.

Passers-by stop me to ask: ‘Are they baby leopards?’

They have also got an enclosure in our back garden where they love to play but live with us in the house.

We bought Khomani six years ago for £4,500. We got Zahara three years ago, for a similar price.

At 19 in tall, Khomani is bigger than a medium-sized poodle but weighs only 19 lb. Zahara is 13 in.

Khomani learned to open all the doors, so we changed the handles to knobs — but now he has started trying to twist them to get them open.

If a friend visits, Khomani will go in their bag to steal their phone, keys and purse and hide them. Zahara waits for the postman every day and rips the post to shreds.

Khomani sleeps between my husband and me and sucks a blanket for comfort. They are similar to toddlers — easily distracted with bundles of energy.

My horrors go on the rampage at night

Tania Moulden, 48, owns a fish and chip shop and lives in Chorley, Lancashire, with her partner. They have three cats, including two F2 Savannahs, Archie and Oscar. She says: 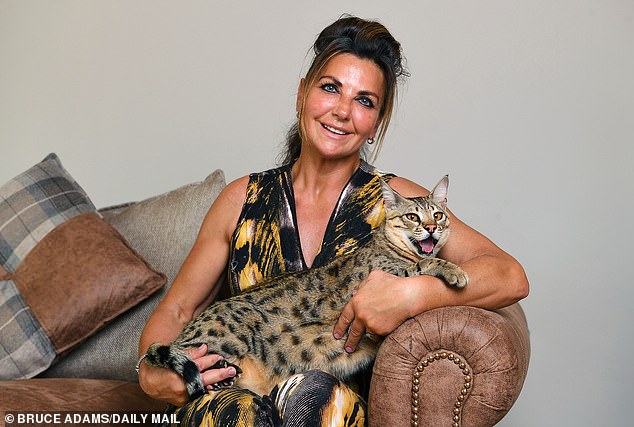 Tania Moulden (pictured), from Chorley, says her two Savannahs, Archie and Oscar, mess up her house at night

When people come to the house for the first time and see Archie, a typical reaction is, ‘Oh my God, what’s that?’ They always want to take photos, convinced he resembles a baby cheetah.

Until three years ago, I had always had Bengal cats but, when two of them died, I wanted something different and came across Savannahs.

I got Archie when he was 17 weeks old. He’d originally been bought by another lady who’d returned him to the breeder because he didn’t get on with her other cats.

He didn’t have the same problem with my old Bengal — quite the opposite. As I watched Archie hugging the life out of him, I decided I had better get another Savannah as a playmate.

Archie’s now three, weighs 18 lb and is 16 in tall, while Oscar is two and tiny for an F2 male at just 13 in. His growth was stunted because he was unwell when he was first born.

They come to life at night, which is why they are not allowed to sleep in our bedroom and are relegated to the sofa instead.

When I’m lying in bed, I can hear them clattering around downstairs, opening cupboards and emptying the contents on to the kitchen floor.

Many a morning I’m greeted with a chaotic mess of porridge oats, bagels and shredded toilet roll strewn across the tiles. Oscar also likes to grab the washing-up sponge, dunk it in his water bowl, then throw it on the floor so that he can skid all over the place.

We’ve got 14 acres of land and I take Archie out on his retractable lead for daily walks and jogs. I don’t let my cats roam free for their own safety and my peace of mind — plus they would naturally explore further from home than normal cats, and I wouldn’t want anyone to pinch them.

If I throw a ball, he will fetch it like a dog. We also have a large outdoor pen where he and Oscar play in luxury if I have to leave the house. It’s got AstroTurf on the floor, a heated bed, swings, a wheel and paddling pool.

They eat a raw-food diet, and Archie will do anything for steak and prawns. Both cats are very affectionate and have never bitten or scratched — but they’re boisterous and play like mad.

He’s prove to a bit of ‘Savvandalism’

Sammi Clark , 29, is a project manager at a bank and lives in Manchester with her husband, their nine-year-old daughter and son, seven. They have an F2 male Savannah named Kovu. She says: 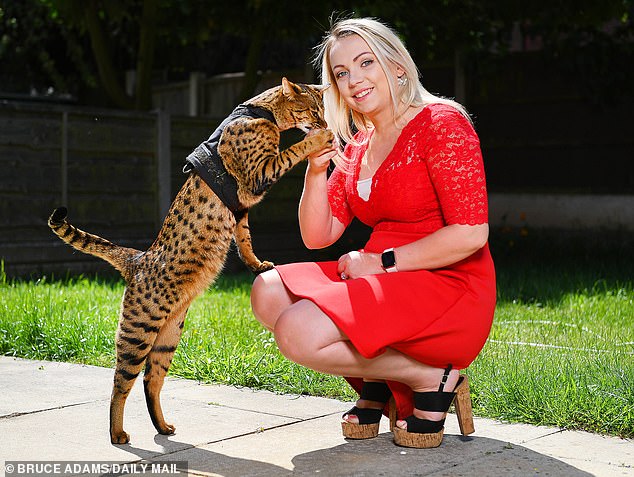 Kovu (left), a Savannah belonging to Sammi Clark (right) from Manchester, is rather destructive when he doesn’t get enough attention

Where many women might blow a work bonus on clothes, heels or holidays, I put mine towards buying Kovu, who cost £4,000.

I’ve always had cats and when I stumbled across Savannahs a couple of years ago, I loved the fact they’re described as being more affectionate than cats, and more like dogs in temperament. They’ve been known to play fetch, and adore water.

When my husband saw the price tag, he said I’d have to wait till my 30th birthday to get one.

But I gradually wore him down and we got Kovu last September from a breeder in Surrey when he was 12 weeks old.

I had seen him advertised online and fell in love with him. He has a wonky tail as a result of his mum accidentally breaking it when she sat on him after he’d been born.

Even at 12 weeks, he was almost the same size as our six-year-old moggie. He will be one this month, and already weighs 20 lb and is taller than the kitchen work-tops when he stands on his back legs.

Although he won’t grow too much more, he won’t be full size until he’s two.

He might be big but Kovu’s a softie and climbs into bed with my husband and me every morning for a snuggle.

Our children adore him and argue over who gets to sleep with him. He particularly loves sleeping on the end of my daughter’s bed.

His best friend is my grandma’s four-year-old chihuahua, Morph. They live next door, so he comes over to play with Kovu and they make a comical sight together.

Kovu also loves to play chasing games with my husband, and most days we take him for a walk on his leash, picking him up whenever we see a dog because he gets nervous.

We don’t give him free rein outdoors for fear of him being stolen or running off and getting lost, and despite their appearance, Savannahs can be very timid and easily frightened.

Our other two cats are very independent, whereas Kovu likes to be with us constantly.

If Savannahs don’t get enough attention, they will become destructive in protest, something owners refer to as ‘Savanndalism’.

We first experienced it last October when we flew home from a holiday in Spain on Halloween. After picking Kovu up from the cat hotel, we left him at home while we went trick-or-treating.

By the time we returned, he had unlatched the kitchen cupboard, taken all the eggs out and smashed them on the floor to show his displeasure that we had gone out.

We got a bigger bed so he could sleep with us

Amanda Mansfield, 52, is a midwife and lives in Derbyshire with her husband Julian, 49, a development manager. They have four children between them, as well as five cats, including an F2 Savannah, Stanley. She says: 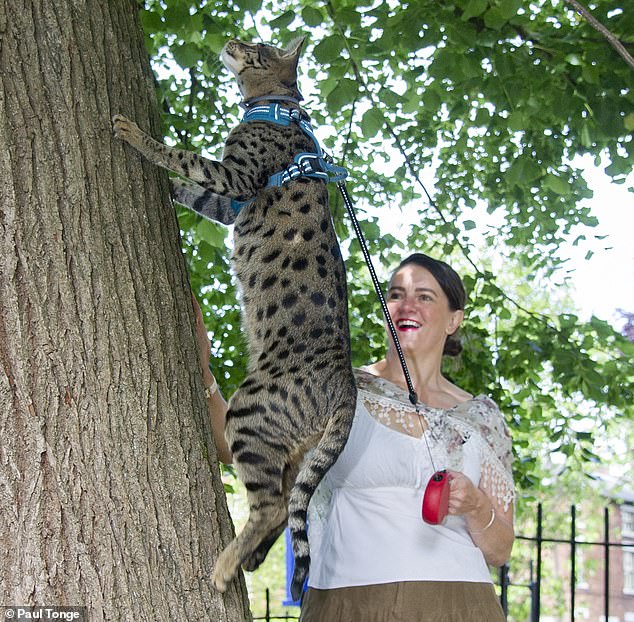 We joke that Stanley is my husband’s mid-life crisis. He fell in love with Savannahs after seeing some when we got our last Bengal cat from a breeder two years ago.

As he told me at the time: ‘It’s cheaper than a Harley-Davidson!’ Still, Stanley was expensive when we got him as a kitten a year ago.

Their personalities are more akin to dogs and they crave company. You couldn’t leave a Savannah at home all day.

Now 15 months old, Stanley weighs 19 lb, is 22 in tall and won’t be fully grown till he’s three. He can jump two metres in the air — including the top of the highest kitchen cupboards — and loves to climb trees.

We walk him twice a day on a harness around our small town. We get lots of inquisitive looks and comments such as, ‘I’ve never seen a cat so big!’ But although he’s taller than most small dogs, he gets nervous and will lean into our legs for reassurance.

Stanley’s too boisterous for our other cats, who are all a bit lazy and disinterested in him, so we’re considering buying another Savannah as a playmate for him.

At home, he has his own armchair and likes to watch TV. If he spots another cat on the screen, he goes to stroke it with his paw.

When he fancies a walk, he whines very loudly by the front door, and he often leaps on to my back when he wants my attention. It makes me jump but he never uses his claws.

Stanley even sleeps with my husband and me. We had to buy a 6 ft-wide super-kingsize bed to accommodate him!

We are about to build a large enclosure in the garden for Stanley to play in. This will enable him to climb and scratch, which is good for his claws — and will stop him sharpening them on the furniture and wallpaper.