Meghan Markle says that the day of her now-famous candid interview, she was ‘running a marathon’ balancing mom and duchess responsibilities 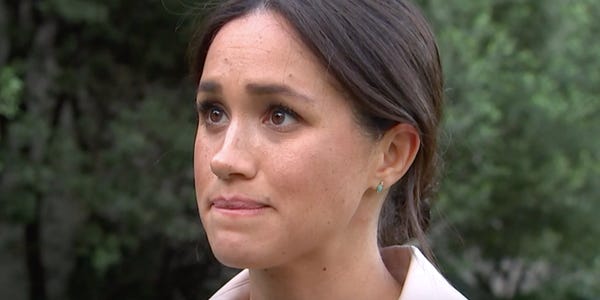 Meghan Markle and Prince Harry gave an exclusive interview on the "Teenager Therapy" podcast in an episode that aired on Saturday in light of World Mental Health Day.

In the episode, the Duke and Duchess of Sussex addressed the stigma surrounding conversations about mental health and discussed how they prioritize mental wellbeing.

In one portion of the interview, one of the podcast's hosts asked Markle: "How are you?"

Markle responded: "Wasn't it funny? It was about a year ago that someone asked me that."

Markle was referencing a widely seen interview she did for an ITV News documentary released in October 2019, where journalist Tom Bradby asked Markle if she was OK, and she said: "Not many people have asked if I'm OK."

In the "Teenager Therapy" episode, Markle continued: "We were on a tour in South Africa, and on the last day of the tour, man, was I tired, and I was about to give Archie a bath, and we were heading home. A lot of people don't know that it's like running a marathon. Between every official engagement, I was running back to make sure our son was fed."

Prince Harry added: "She was still breastfeeding at the time."

Markle said that she was not expecting her response to Bradbury's question to capture the attention of people the way it did.

"I didn't realize that my answer would receive such an interest from around the world, because I said, well, 'Thanks — people haven't really asked me if I'm OK.' I didn't think about that answer. I just answered honestly because I was in a moment of vulnerability because I was tired, because there was no presentation — it was just, 'Here's where I am, I'm a mom who is with a 4-and-a-half-month-old baby, and we are tired,'" Markle said.

The duchess told the "Teenager Therapy" hosts: "Today I'm doing really well, so thank you for asking. The past few months have been layered for everyone. We certainly can't complain, we are fortunate, we all have our health, we have roofs over our heads."

OUR EPISODE WITH PRINCE HARRY AND MEGHAN IS OUT! In honor of World Mental Health Day, The Duke and Duchess of Sussex sat down with us for a conversation about prioritizing mental health, removing the stigma around the issue, and how we can all contribute to a healthier world: physically, mentally, emotionally, holistically. We cannot emphasize enough how honored we are to be able to bring you this important conversation. We hope you enjoy it and find something you can apply to your own life. Take care of yourself, you deserve to be loved.  Link in bio! – #princeharry #meghan #dukeandduchessofsussex #duchessofsussex #dukeofsussex #worldmentalhealthday #worldmentalhealthday2020

In the interview, the couple also discussed the importance of speaking openly about mental health, how they stay calm in situations that may be nerve-wracking, and how they cope with hardships.

Listen to the full podcast episode with Markle and Harry on the latest episode of "Teenager Therapy."