Melbourne businesses vying for City of Melbourne contracts would have their bids boosted against interstate competitors under the latest election policy unveiled by lord mayor Sally Capp.

Cr Capp described her local procurement policy as being "one of the boldest policy moves" ever undertaken at Melbourne Town Hall. 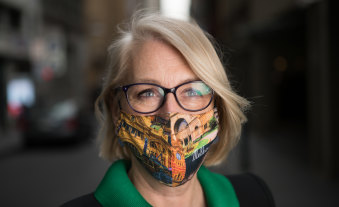 Under the plan, the council would adopt a purchasing policy that gives a 30 per cent weighting to the strategy assessment of every tender to businesses, goods or services from within the municipality.

"It's probably one of the boldest policy moves that we've made at the City of Melbourne," Cr Capp said.

"This is unapologetically pro-Melbourne and means our local businesses would have the very best chance of securing contracts from the City of Melbourne.

"In the event that no Melbourne-based businesses, goods or services could be sourced, then Victorian businesses would be prioritised over interstate businesses."

With electioneering well under way for the October postal poll for Melbourne Town Hall, Cr Capp is focusing her sights on the business vote.

The council commissioned accounting giant PWC to conduct modelling on the economic impacts of the COVID-19 pandemic on the municipality. PWC's report, released earlier this month, found the City of Melbourne's economy will contract by up to $23.5 billion this year – or 22 per cent of forecasted growth.

It predicted inner Melbourne would lose 79,000 jobs annually and bleed more than $110 billion in revenue over the next five years, as the effects of the COVID-19 linger in coming years.

The City of Melbourne manages a $632 million budget and the capital spend is projected to be $175.8 million this financial year.

“I want to see as much of this money staying in Melbourne as possible,” Cr Capp said

"In the event that no Melbourne-based businesses, goods or services could be sourced, then Victorian businesses would be prioritised over interstate businesses.

"All other assessment criteria would still apply, including 'value for money'. But value for money includes the value that the local economy receives from boosting business and boosting jobs. When we buy local, the benefits stay local."

The City of Melbourne's procurement policy does not currently attach a weighting to local businesses, although the Victorian government does have a Local Jobs First policy.