Scotland has overtaken London as the fastest moving market for million-pound homes, new research has revealed.

The findings by Rightmove revealed that million-pound properties in Scotland typically found a buyer in 61 days, 25 days quicker than before the pandemic.

The analysis looked at the year before the pandemic, compared with the year since the property market reopened to measure current buyer behaviour in the most expensive areas against pre-pandemic levels. 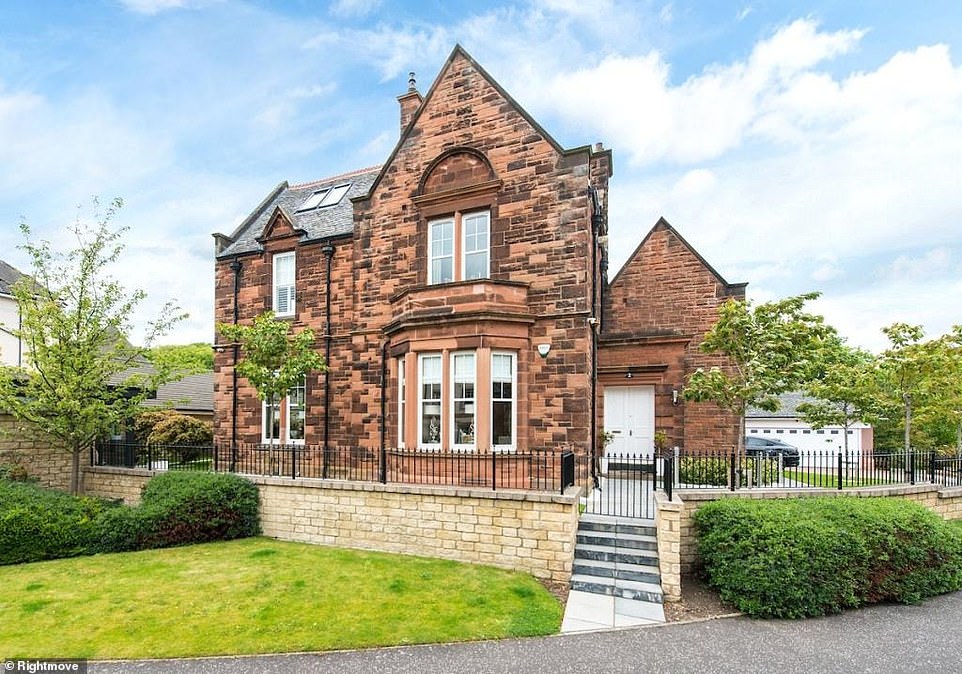 Scotland in demand: This five-bedroom detached house in Edinburgh is for sale for £1.65million via estate agents Rettie & Co 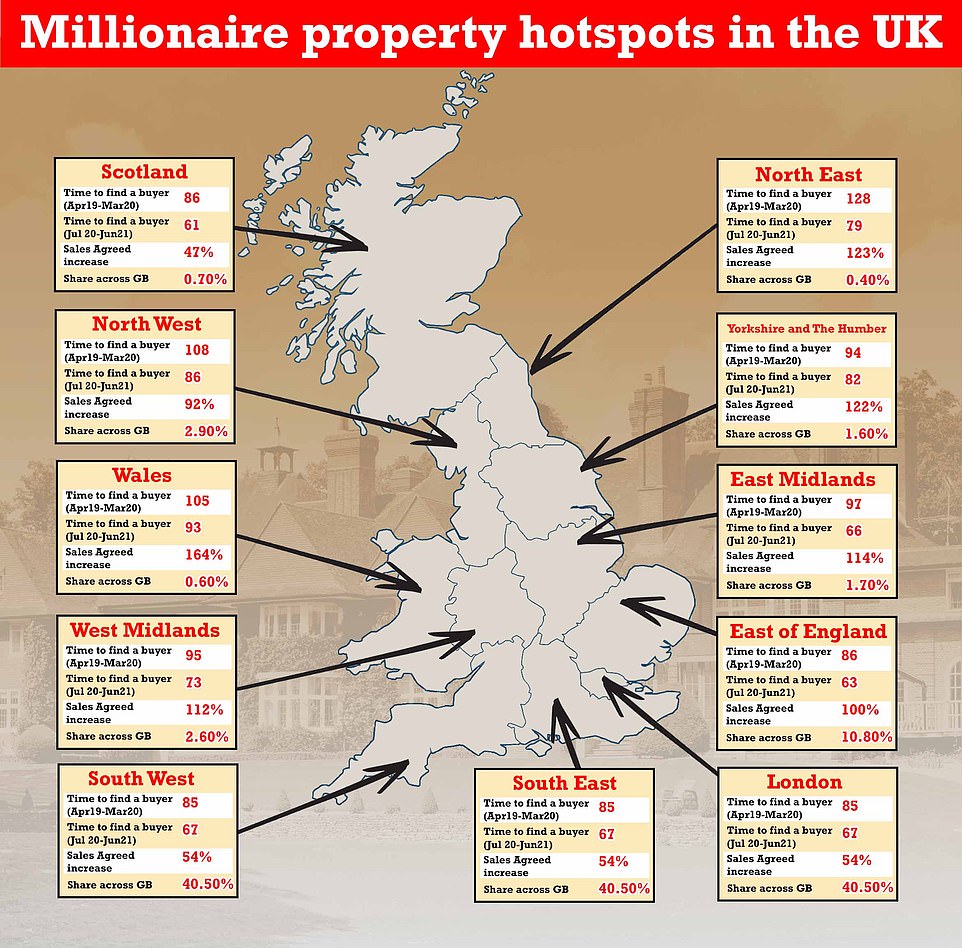 Rightmove revealed that million-pound properties in Scotland typically found a buyer in 61 days, 25 days quicker than before the pandemic

During the past year million-pound homes have taken an average of 67 days in London to find a buyer.

While this is still quicker than before the pandemic, it sees the capital drop from being the fastest-selling region to being in fifth position.

Its new ranking sees it placed behind Scotland, the East of England, the South East and the East Midlands.

In a sign of how families are seeking in-demand commuter locations on the edge of the countryside, both Hertfordshire and Surrey claimed four spots each for the towns outside the capital where million pound-plus homes sold fastest, with Berkhamsted, St Albans, Hertford and Hitchin featuring from the former county and Thames Ditton, Epsom, Ashtead and Reigate from the latter.

In the fastest moving local area, Thames Ditton, million pound-plus homes have been taking just 26 days on average to find a buyer.

The data suggests that London’s overall influence on the prime market has dropped slightly.

Rightmove attributed this to buyers in the prime market prioritising more space, and being able to consider working from home when choosing their next property.

The South East has recorded the biggest increase in the share of million-pound homes across Great Britain, rising from 26 per cent to 29 per cent. 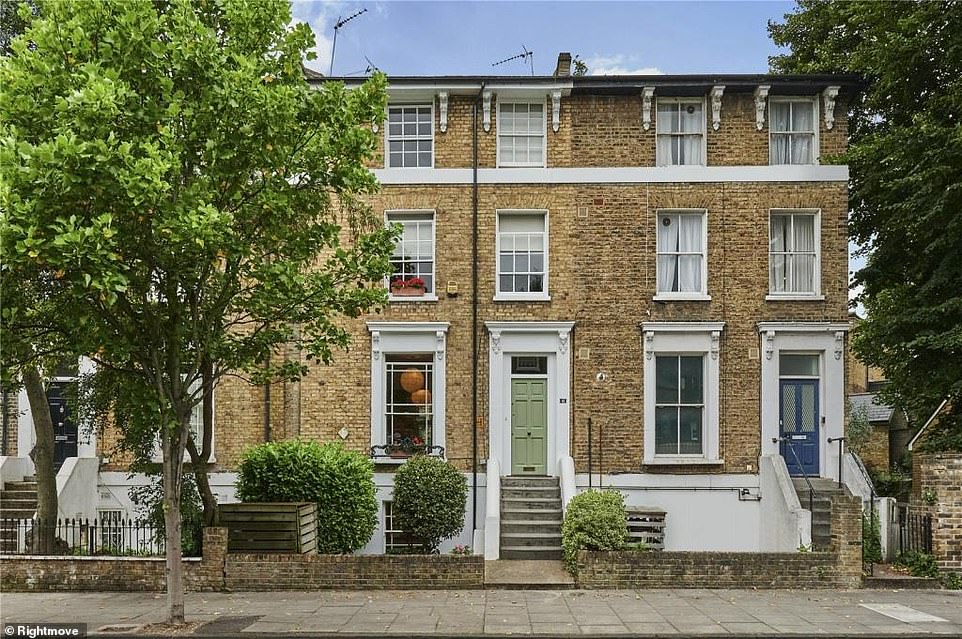 This four-bedroom terrace home in Hackney, north London, is for sale for £2million via estate agents Chestertons

Meanwhile, the increase in the number of million-pound homes in Britain that are selling is up 80 per cent on pre-pandemic levels, compared with an overall increase across all property sales of 37 per cent.

Wales has seen the biggest increase in the number of sales being agreed for million-pound homes, more than doubling – at 164 per cent – since before the pandemic, although their million-pound sales make up only 0.6 per cent of all those taking place across Britain.

At a local level, there are some significant changes. Stockbridge, in Hampshire, has seen the biggest rise in the proportion of homes that are selling for a million pounds or over.

The percentage of all sales in the area that are worth one million pounds or more has jumped from 11 per cent to 26 per cent now.

The fastest-moving area is Thames Ditton in Surrey, where million-pound homes have found a buyer in just 26 days. 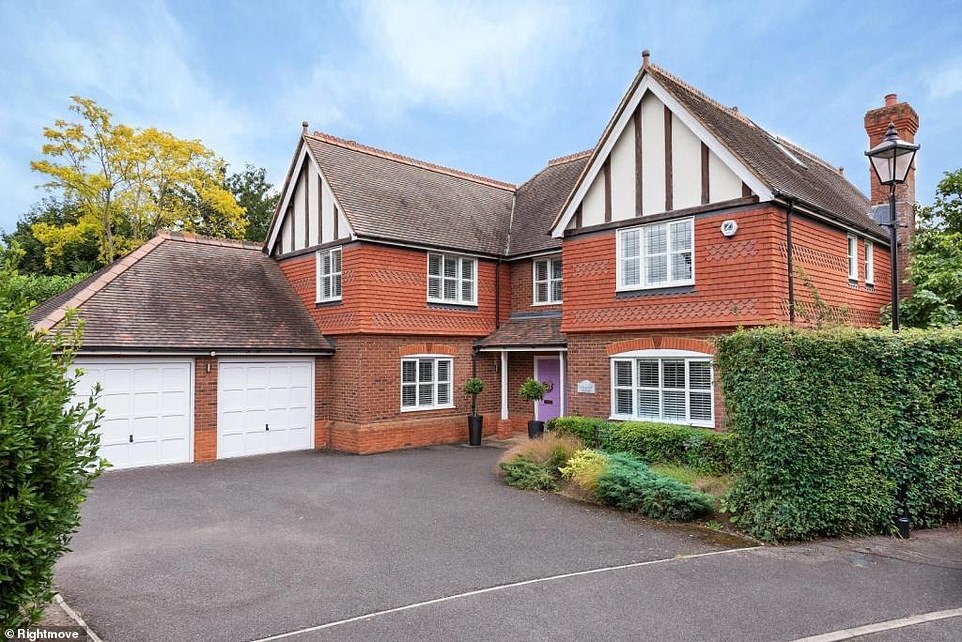 This five-bedroom detached property in Surrey’s Thames Ditton is for sale for £1,795,000 via estate agents Curchods

Tim Bannister, of Rightmove, said: ‘Prime sales growth has outperformed the wider market in the past year, as many people across Britain have chosen to take a step up the property ladder, potentially moving further out to afford a bigger property, or finally making the move to their forever home.

‘While London is still home to a significant portion of the prime market, some millionaire movers have turned their city commute into a rural route. These dynamics have helped push swathes of Britain’s property stock into the higher price brackets, and have led to a broader geographical spread of million-pound properties.’

Estate agents confirmed that the expensive homes in parts of Scotland are proving to be in demand.

Dr John Boyle, of estate agents Rettie & Co in Scotland, said: ‘The Scottish £1million market has proven to be resilient in the face of the pandemic.

‘Just like the wider housing market here, demand has been moving well ahead of supply, leading to price rises and fast-moving sales.

‘The market is particularly strong in the east of the country, with Edinburgh alone accounting for well over half of all Scottish £1million sales.

‘However, other areas are seeing rising £1million sales, particularly in outlying areas of the wider Lothians market, with sales outside Edinburgh notably higher in the east compared with recent years.’

James Wyatt, of estate agents Barton Wyatt in Virginia Water, said: ‘Virginia Water has for many years been a ‘jewel in the Crown’ of the Home Counties when it comes to property sales. The 1750-acre Wentworth Estate is well known for its very high value homes of up to £30million.

‘During 2020 we saw many UK buyers and tenants moving out of London, keeping us busy. In 2021 we have seen no let up, but now also have seen the return of international buyers. It is curious that – quite against our expectations – the pandemic has created a market like we’ve never seen’.