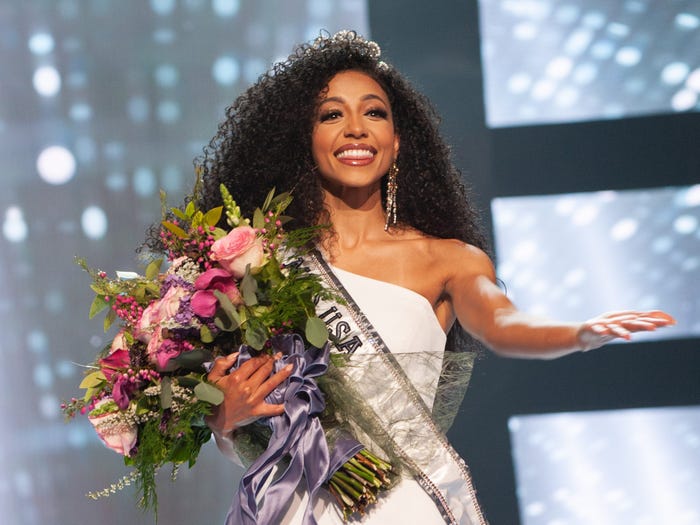 The Miss USA pageant will look a little different this year due to the ongoing pandemic, but two things that will remain the same are the swimsuit and evening gown portions of the competition.

While both rounds were eliminated from the Miss America pageant — which is a separate organization from Miss USA — in 2018, Miss USA and its sister pageant Miss Universe have no current plans to get rid of them.

Miss USA Cheslie Kryst, who will pass down her crown on Monday night, told Insider that the swimsuit competition has always been her favorite part of the pageant

"I grew up as an athlete," Kryst said. "My dad is a bodybuilder — his swimsuit is much smaller than mine! My mom competed in pageants and her competitions included swimsuit. I was a Division I athlete. When I competed in track and field in college, I pushed myself to the limit. I did so much in order to make sure that I was at 100% for my competitions. And so I did the same thing for Miss USA, Miss North Carolina USA, and Miss Universe."

The Miss America pageant was launched in 1921 in part to help draw tourists to Atlantic City, New Jersey, after the Labor Day holiday. Meanwhile, it was a swimwear company that actually launched Miss USA and Miss Universe in 1952.

Miss Teen USA, which is part of the same organization as Miss USA and Miss Universe, eliminated its swimsuit competition in 2016. Two years later, Miss America did the same.

"We are no longer a pageant," former Fox News host (and Miss America 1989) Gretchen Carlson announced in June 2018. "We are a competition."

Carlson had become board chairwoman of the Miss America organization in January 2018 after Huffington Post leaked emails that showed then-CEO Sam Haskell and various organization leaders fat-shaming contestants, calling them c—-, and even wishing for a past winner's death.

"We've heard from a lot of young women who say, 'We'd love to be a part of your program, but we don't want to be out there in high heels and a swimsuit,' so guess what, you don't have to do that anymore," Carlson said during her announcement. "Who doesn't want to be empowered, learn leadership skills, and pay for college and be able to show the world who you are as a person from the inside of your soul? That's what we're judging them on now."

Carlson stepped down in June 2019 amid heavy criticism from various state pageant organizations for her decision to eliminate the swimsuit competition, as well as accusations of bullying from Miss America 2018 Cara Mund. Nineteen former Miss America winners had called for her resignation in an open letter.

While the debate around the swimsuit competition continues, Kryst supported Miss America's decision to eliminate it

"I think it's fine that they made that choice," she told Insider. "I think that part of being in the society that we're in today is understanding that women make different choices."

"I think that some people think of feminism as, we have to do everything sort of in contrary to what people expect of women," she explained. "Maybe you can't like makeup, maybe you can't enjoy more frivolous things that people associate with being a woman."

"On the other hand, I think there's this different idea of feminism — which I sort of ascribe to — in that I can do whatever I want and I deserve to be treated equally when I make each of those decisions," Kryst added. "And I think that's the strategy of the Miss Universe Organization in deciding to not do away with the swimsuit and evening gown competition."

"I think that's just a different view of feminism and both of those are okay, I think this society that we live in allows space for both of those," she told Insider. "But I think it's a great decision that the Miss Universe Organization kept both of those areas of competition, and that's one of the reasons why I loved competing and winning in the organization."