‘Missing middle’ leaves too many Victorians without mental health support

Martin Foley, Victoria’s Minister for Mental Health, said recently that the state’s mental health system “wasn’t fit for purpose” − in a rare moment of political truth-telling. He said it as the COVID-19 pandemic set itself to test the fitness of the mental health system in the same way it has tested our aged care, childcare and hospital systems.

The mental health fall-out from the pandemic has a long way to run, but we are starting to see its impact. DHHS data shows that more people are presenting to emergency departments after harming themselves, and Eli Lilly, maker of the antidepressant Prozac, has reported shortages of the drug because of increased demand. 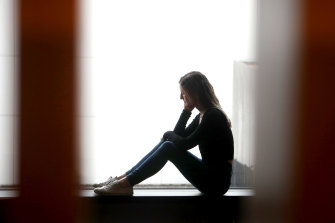 Too many Victorians are not getting the mental health support they need. Credit:Sylvia Liber

One of the reasons the mental health system is vulnerable is because shared funding between state and federal governments leaves large gaps. The state government funds public hospital units and community care for people with severe mental illnesses. Funding for this system has steadily eroded in Victoria, to the extent that the state has the lowest per capita expenditure on mental health care and the lowest number of beds. Community care is difficult to access. It is restricted mainly to people with severe psychotic illnesses, or who are considered at high risk of harming themselves or others. The people who are provided with care very definitely need it, but so do many others who cannot clear the bar to qualify for it.

Those who can’t access care via the state government mental health services can attempt to get care via Medicare-funded services. General practitioners provide much of it, and they can organise referrals to psychiatrists, psychologists and other allied health clinicians. Mental health clinicians are concentrated in wealthier suburbs, where they can charge higher fees and see patients who more often have less complicated problems. Access to them requires that a person has the wherewithal to
organise a referral, has the capacity to pay the gap between what the clinician charges and what Medicare reimburses, and has the ability to organise themselves to attend regular appointments. This is beyond many.

The “missing middle” has been coined to describe people who fall in the gap between what the state and federally funded systems can provide. These are people who aren’t considered unwell enough to get care in state-funded mental health services, but who can’t access Medicare-funded care or don’t benefit from it.

Many people in the missing middle have complex mental health problems, exacerbated by poverty and other social disadvantages. They might have problems with depression, anxiety, problematic use of alcohol and other drugs, difficulties in their relationships, unemployment, and unstable accommodation. They need much more than a GP or psychologist, despite their best intentions, can provide. They would benefit from the multi-disciplinary care provided by their local mental health service, but unless they have demonstrated that they are at imminent risk are unlikely to be provided with it.

This group are likely to be particularly vulnerable to the effects of the pandemic, which will exacerbate their financial stresses and erode their social supports. We need new ways of thinking to provide them with the mental health care they need. This means closing the gap between the state and federal systems. It is a credit to the Victorian government that they have recognised the system’s shortcomings. The Royal Commission into Victoria’s Mental Health System has yet to hand down its final report, but in its interim report advocated for funding of more beds, and for the establishment of something akin to the Victorian Comprehensive Cancer Centre for mental health.

While the details haven’t been made available, he said the funding would provide 12 months of support for 15 new mental health centres around Victoria. They would be established in close connection with GP clinics, and would house psychologists, social workers and mental health nurses to provide support.

The model appears to build on the success of the federally funded headspace centres, which offer care to adolescents and young adults with mental health difficulties. The government funds the infrastructure for clinical services, and practitioners then offer Medicare-subsidised care to young people, charging either no gap or a minimal one while working with other services to provide assistance with employment, housing and other health concerns.

Significantly, Hunt also proposed a joint Victorian Mental Health Taskforce between the federal and state governments. This recognition of the need for both sides to work together to close the gap in mental health care is important. These are small steps, but we can hope they are the first in the more substantial reform needed to address the missing middle.

Professor Christopher Davey is the head of the department of psychiatry at The University of Melbourne and a psychiatrist at the Royal Melbourne Hospital.