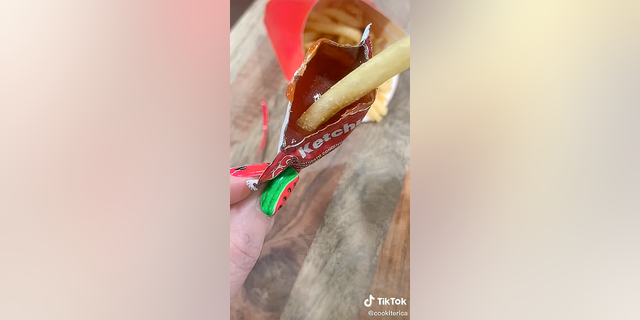 Millions are applauding one woman’s hack that apparently makes dipping fries easier while on the go.

Erica Kuiper, a North Carolina resident, told Fox News that she and a friend thought up the hack in high school while eating French fries and driving around town.

“We stopped at McDonald’s and she was dipping her fry in through the top [of the packet]” Kuiper recalled. “We said, ‘What if you opened it from the side? You could get a lot more ketchup.’”

To pull off Kuiper’s hack, she said to run your fingers down the the side to push the ketchup to the bottom of the packet. “Take the tear, pull it down the side and it opens right up,” she explained.

The packet, held horizontally, then serves as a dipping station.

Kuiper posted a video of the hack this summer onto TikTok where it garnered more than 4 million views.

Commenters weighed in – some calling the tactic “genius” and others questioning, “how did I not know about this?”

Kuiper said some people living outside the U.S. noted how their ketchup packets are designed differently, so this hack isn’t possible for them to pull off.

Kuiper said she began using her hack as a mess-free solution when her daughter Morgan was a little one snacking on fries.