Poppy love: Monty Don adores promiscuous poppies, with their beautiful blooms and stunning seedpods. Here he highlights his favourite types of all…

Monty revisits one of his classic books, Gardening at Longmeadow, in an occasional series.

For all their massed effect of brilliant colour when growing in a field or on a bank, annual poppies – which are starting to flower at the moment – have an individual delicacy that I adore.

They can be extraordinarily prolific. Each poppy flower will produce about 17,000 seeds, of which some 3,000 will remain viable and dormant in untilled ground for at least a century before bursting into flower when the ground is disturbed and the seeds exposed to light.

This tendency to wait until ground is tilled explains why poppies will grow seemingly from nowhere when a garden is cleared for the first time for years. 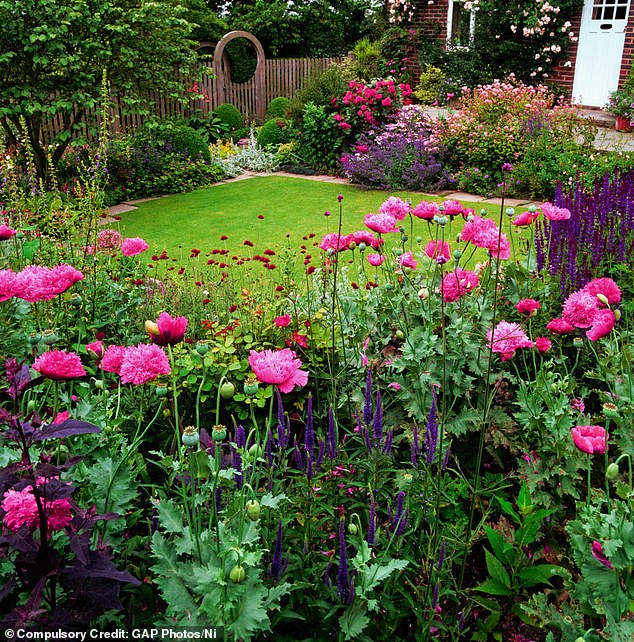 Breeders have harnessed its promiscuity to select garden strains with the red shifting through every shade. ‘Ladybird’, with black splodges, has the reddest petals of all, shining as bright as a ruby as it catches the evening sunlight in the Jewel Garden.

Perhaps the most significant deliberate domestication of field poppies came in 1880 when the Reverend Wilks, vicar of Shirley in Surrey, noticed a single one in the vicarage glebelands with a white base.

What a fabulous pleasure it is to pick a pod, crack it and scoop a row of peas straight into your mouth. These raw peas have a sweetness and depth of taste that money just cannot buy.

Peas like neither hot, dry weather nor cold, wet soil, so the best time to sow is in April and May, although it is worth trying a June sowing.

I grow ‘Feltham First’ (early), ‘Douce Provence’ (early), ‘Hurst Green Shaft’ (maincrop), ‘Carouby de Maussane’ (mangetout) and the wonderfully tall, purple-podded ‘Ezetha’s Krombek Blauwschok’. Give them ground that has been manured that winter. I sow mine in double rows, spaced 10-12cm apart and with plenty of room between the rows to walk down and pick the peas. They should be given support as soon as they germinate. The pods will appear as the last flowers fade and should be picked as soon as the peas are large enough to shuck.

When the bines start to turn yellow and the pods become wrinkled and hard, pull the entire plant up, fork the ground over and use the site for winter brassicas such as cabbage, broccoli or kale, which will gain much from the nitrogen that all legumes add to the soil.

He liked what he saw so collected the seed from it and eventually bred the strain that we know as Shirley poppies, which have white, rather than black, bases to the petals. They are more delicate and subtle than the field poppy, although tend to revert to field red unless you carefully collect the seed of the paler, pastel shades.

The opium poppy, Papaver somniferum, is my favourite type, and as well as its superb flowers it has wonderful foliage while the leaves are young, and some of the most beautiful seedpods in the natural world.

It grows in almost any conditions and reappears year after year with reliability. The leaves are a fabulous glaucous colour, and as lush as any lettuce, and the stems grow up to 1.5m tall in rich soil.

They look especially good with roses, but you can hardly go wrong with them, whatever they accompany. The flowers can be any colour from white to a deep purple and range from being single, fringed or arranged in multi-layered frills.

Among the opium poppies, the peony-flowered types are my favourites of all, with their petals like crumpled ruffles of shredded silk. Others have cut fringes or create such a mass of petals that they are almost circular.

‘Black Peony’ has an intense plum colour and, at the other end of the palette, ‘White Cloud’ is perfect for a white border. I also love the crested heads of the Laciniatum type that look like headdresses for a day or so before they fully open.

Opium poppies are worth growing for their seedheads alone and unless you are collecting the seeds of a particularly lovely one, leave the plant in the ground for the urn-shaped fruiting heads.

If you do want the seeds, tie a piece of twine around the stem as soon as it flowers (you think you won’t forget which one it is but you always do) and cover it with a paper bag when the last petal drops.

Always sow annual poppies in situ as they hate being moved except when tiny.

Either scatter the seed and let them grow where they land or sow thinly in zigzags so you can differentiate the emerging seedlings from weeds.

How to grow pelargoniums 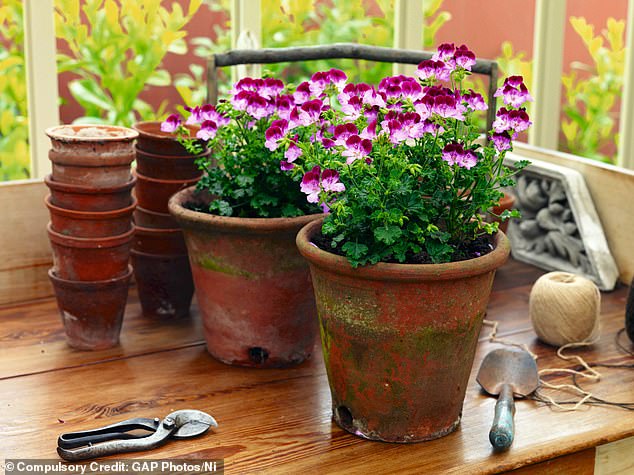