Morrison in his happy place, but it’s not all beer and skittles

Morrison has switched straight back into campaign mode after pulling the trigger for a May 21 election on Sunday. 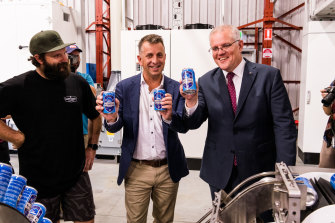 On Monday, he was back in his happy place, visiting a beer cannery and a drone manufacturer in a marginal electorate, talking up his economic credentials and chatting happily with the business owners about how many jobs they were able to add after receiving government grants.

And the electorate of Gilmore, on the NSW south coast, has been showered with government cash in recent years, winning $47.4 million in discretionary grants, while neighbouring Eden-Monaro received $15.7 million and Whitlam (a safe Labor seat) $4.2 million.

The company, located at Culburra near Nowra, has just opened its new facility with a German-made machine that prints directly onto cans, instead of using paper labels, making it better for the environment and meaning it can offer customers short runs of as few as 50 cans. It bought the machine with a $1 million Commonwealth grant.

A worker said the graphic for the “ScoMo” label had been supplied by the Liberals. Another offered lingering media the empty cans left when the PM departed, saying they’d just end up in the bin otherwise.

Elections are all about choice, Morrison declared on every television network and several radio stations early on Monday morning.

Sadly, the canning company didn’t have tins of his choice of Hairyman Brewery’s Shire-brewed Follet’s Fable, although it did have a Shark Island Lager tin that the avowed Cronulla fan seized on with delight. 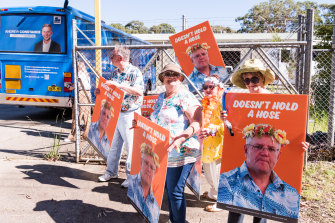 At the cannery, Constance, a long-time state MP, said the people of Gilmore were “not interested in negative politics”.

The protesters at the gate certainly weren’t interested in what Morrison had to offer. The half-dozen people, who included a Labor-affiliated local councillor, were decked out in Hawaiian shirts and armed with a ukulele and hose.

Bob from Vincentia, who declined to give his surname, said his message for the PM was to “be fair dinkum”, mentioning people who had lost their homes in the Black Summer bushfires were still living in temporary accommodation.

“If you want to stand there and take the credit for things, well start to do action,” he said.

The campaign bus squeezed past and Morrison moved on.