An investigation into who in Prime Minister Scott Morrison’s office knew about former staffer Brittany Higgins’ allegations of rape by a colleague has been put back on hold until a criminal trial into the matter has ended.

The head of Mr Morrison’s department, Phil Gaetjens, announced on Monday he had suspended his inquiry after taking legal advice about whether it could prejudice the court case. 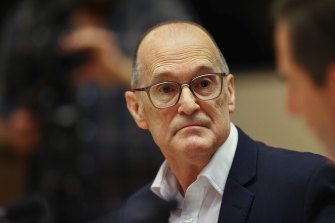 Prime Minister and Cabinet secretary Phil Gaetjens has suspended an inquiry into who in Scott Morrison’s office knew about allegations of a sexual assault in a ministerial office.Credit:Dominic Lorrimer

It comes after the ACT Director Of Public Prosecutions Shane Drumgold advised Ms Higgins to “carefully consider not participating” in the inquiry and said that, should Mr Gaetjens’ report be published, it could be “highly prejudicial to the proceedings”.

Earlier this month, police charged 26-year-old Bruce Lehrmann with one count of sexual intercourse without consent. He denies the allegation and is due to face the ACT Magistrates Court on September 16.

Mr Morrison asked Mr Gaetjens to look into what information his staff had and when they knew about Ms Higgins’ allegation, made public in February, that she had been raped in the office of senator Linda Reynolds in March 2019.

The claim sparked three separate government reviews and a spate of further unrelated allegations about bad behaviour and sexual harassment in Parliament House.

But Mr Gaetjens’ inquiry was put on hold in March after police advised him it might interfere with their investigation. The PM&C secretary told Senate estimates he resumed the work on May 11 after getting the all-clear from police and expected it to be finished within weeks.

But on Monday afternoon he issued a statement saying he became aware of Mr Drumgold’s views from media reports last week, confirmed it with the prosecutor, and sought his own legal advice.

“On the basis of that legal advice received on 27 August 2021, I have suspended my inquiry until the conclusion of the criminal trial. This is to ensure that the inquiry can have no adverse impact on the criminal prosecution,” Mr Gaetjens said.