Mother, 47, who spent $236,000 on 30 rounds of IVF in a bid for a second child finally falls pregnant on her last try using a donor egg – thanks to a Russian clinic offering a money-back guarantee

A 47-year-old woman desperate for a second child has finally fallen pregnant after spending over $236,275 on 30 rounds of IVF.

After seven agonising long years, Suvi Mahonen, 47, from Surfers Paradise, Queensland, has finally fallen pregnant with her miracle second baby after taking out loans to fund her IVF journey.

The journalist and her husband Luke Waldrip, 50, began trying to conceive through IVF in May 2015, two years after welcoming their now eight-year-old daughter Amity.

After seven soul-crushing years of negative results, the couple decided to travel to the OLGA Clinic in St Petersburg, Russia, where they spent $38,788 on three rounds of IVF using a donor egg.

The couple were elated to receive the long-awaited positive result soon after returning back to Australia. 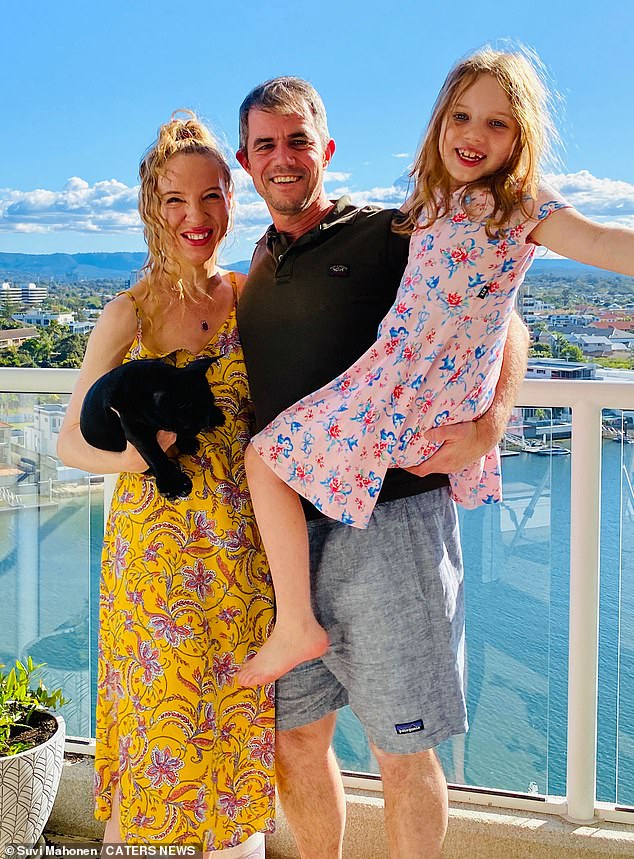 Suvi Mahonen, 47,  who lives in Surfers Paradise, Queensland, with her husband Luke Waldrip and their daughter Amity, eight, has finally fallen pregnant with her miracle baby after spending $236,275 on 30 rounds of IVF since 2015 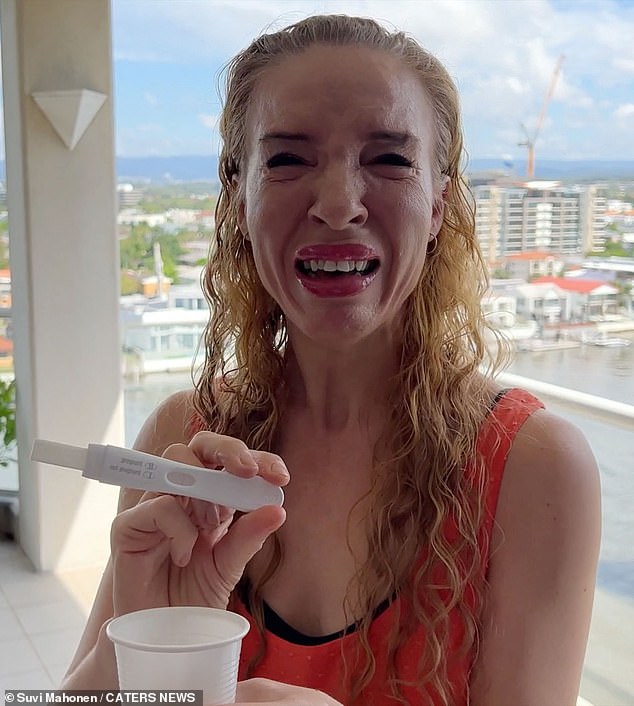 Suvi and Luke travelled to Russia earlier this year, where they spent $38,788 on three rounds of IVF in order to get a much-awaited positive result, pictured

Suvi said: ‘We were gearing up to be disappointed. I still had my suitcase out on the table, and I remember thinking, “I’m not going to unpack because I might be needing to go back to the clinic in Russia for another transfer”.

‘Then the test was positive and there were tears of joys. But a huge part of that was tears of relief.

‘I think, the only reason we decided to give it one last go was because of the Olga Clinic’s money back guarantee. When we found the Olga Clinic I was like, “If we succeed, fantastic. Who cares about paying off the debt for the rest of our lives?’

‘But I was pretty much resigned at that point anyway and you have to come to a point where you have to accept your life. 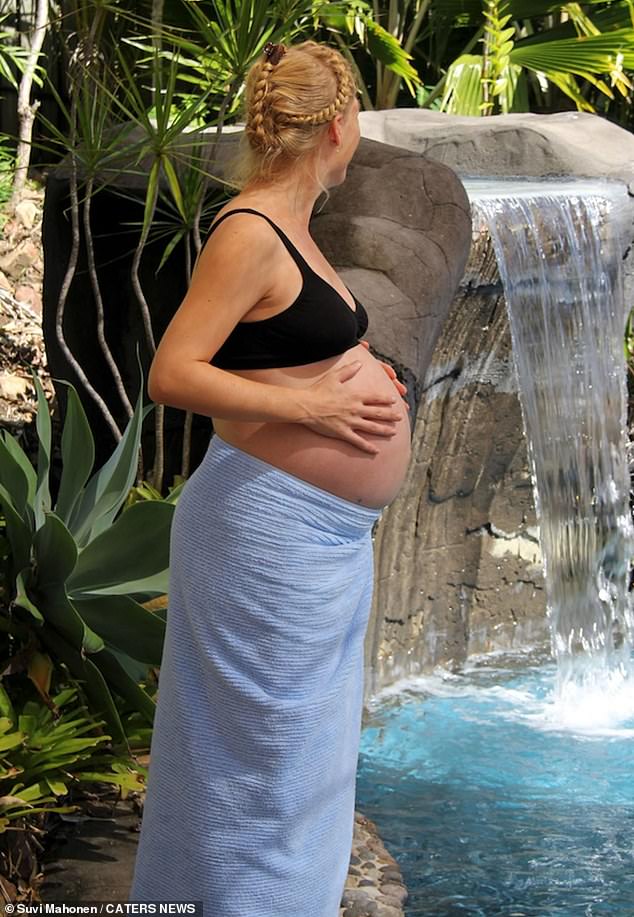 Suvi got pregnant with Amity in 2013, and began to try for a second baby aged 40 in 2015, but struggled to conceive 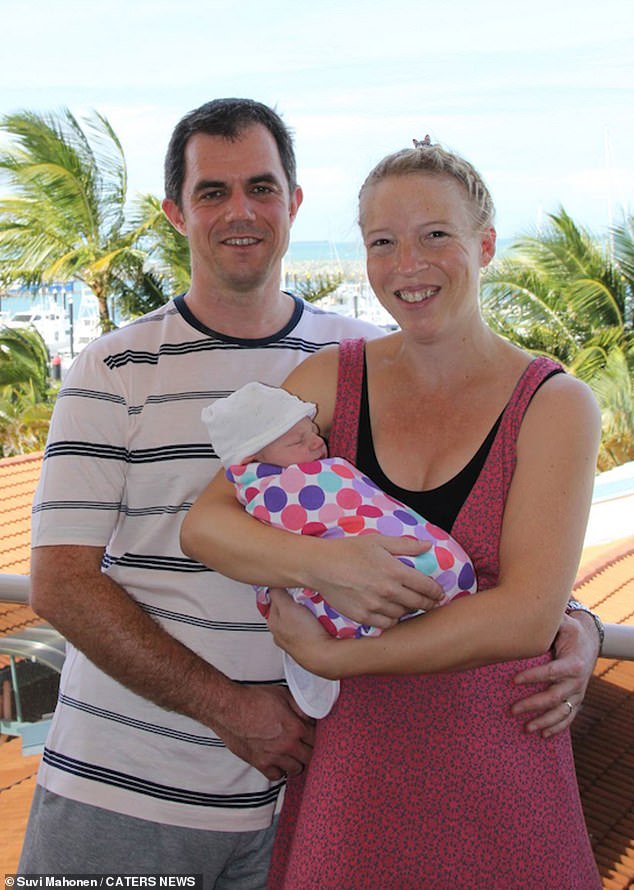 After welcoming their daughter in 2013, the couple were determined to have a second child, but were eventually discouraged with their struggle with IVF

‘Even if you had failed on one level you have to look at what you have, and we do have a beautiful daughter, so I was resigned to that.

‘But finally, this journey can actually be over.’

The expectant couple’s IVF journey has ranged three continents, first starting in Australia, they soon travelled to Los Angeles, in 2015 and finally to the OLGA Clinic, in Russia where they spent more than $38,788 on three rounds of IVF using a donor egg.

She said: ‘At the beginning when we were doing rounds of my own eggs, I was being honest with people and tell them that we were trying with IVF. 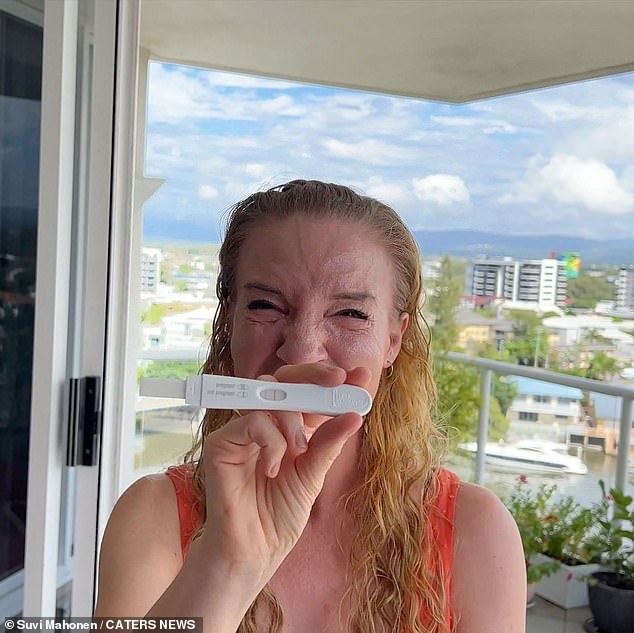 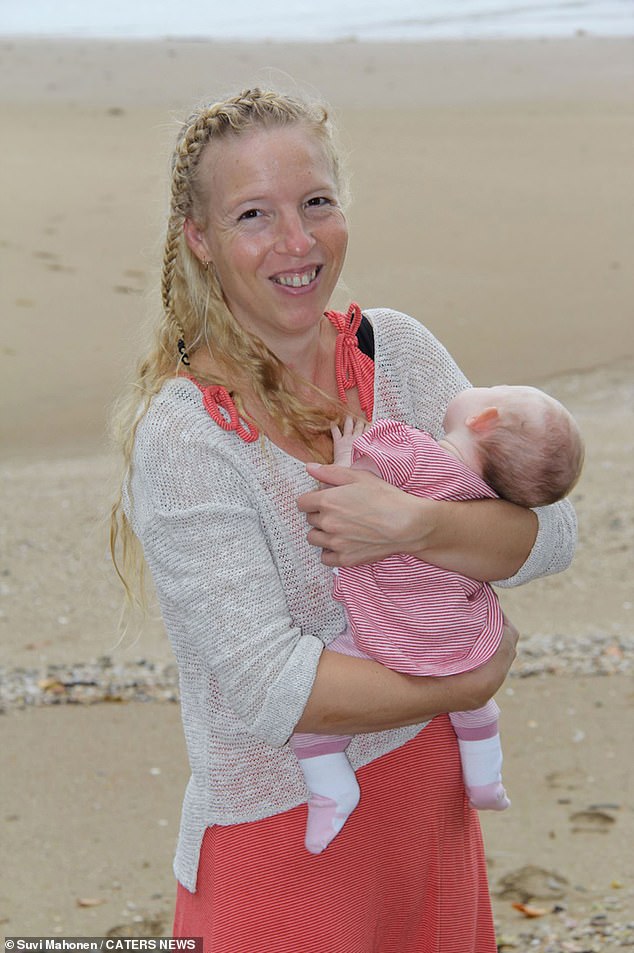 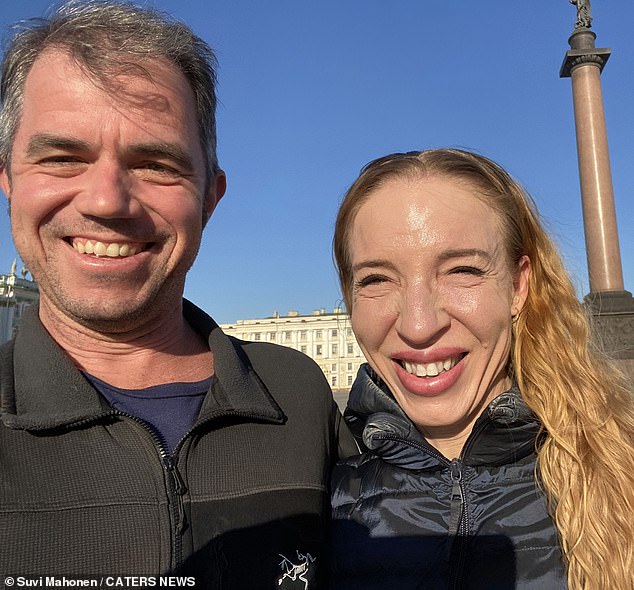 Luke and Suvi are now going to be parents for the second time, after nearly giving up on trying to have a baby

‘Stopping and giving up has been something that has been very much on the cards at times,

‘The negative test results were devastating; they became soul destroying and it made me feel like a failure.

‘It clouds so much of your other life as well, so, you feel like a failure in everything.

‘If we didn’t succeed with the OGLA Clinic, we would get that money back and that really would have been it. 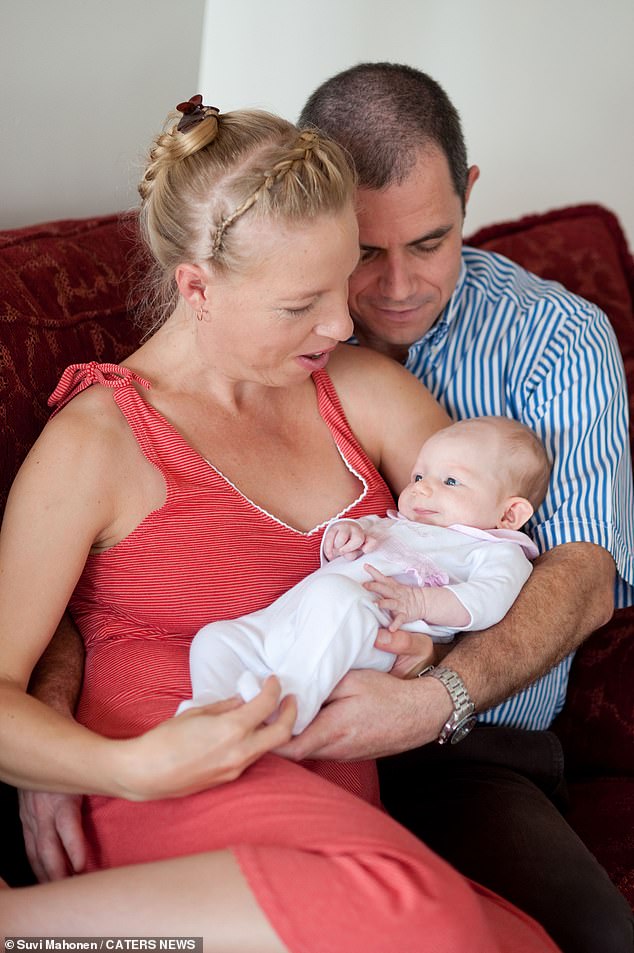 Suvi and Luke with Amity in 2013. The couple admitted trying to conceive made them feel like a failure all the time 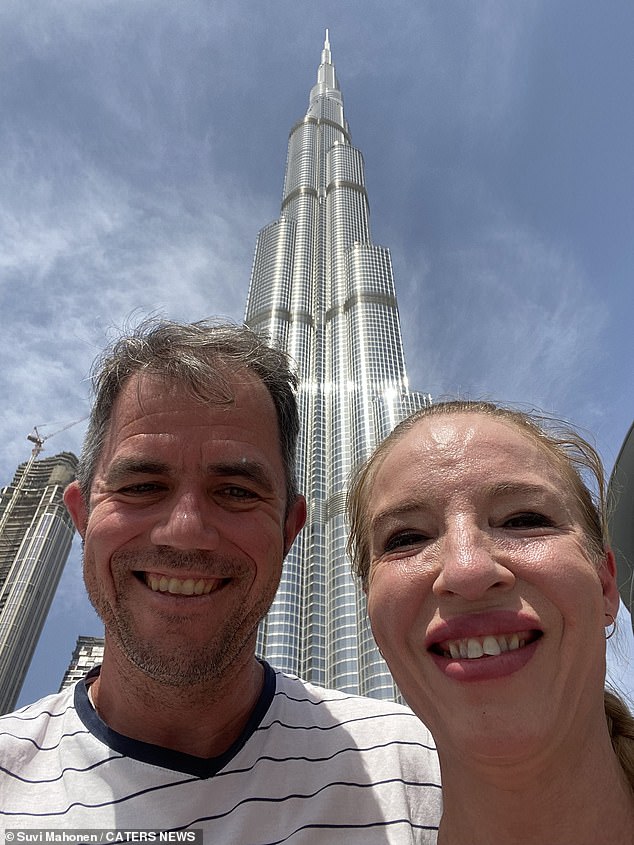 The couple in front of the Burj Khalifa during a holiday in Dubai. Soon, they’ll have plenty of family getaways to plan 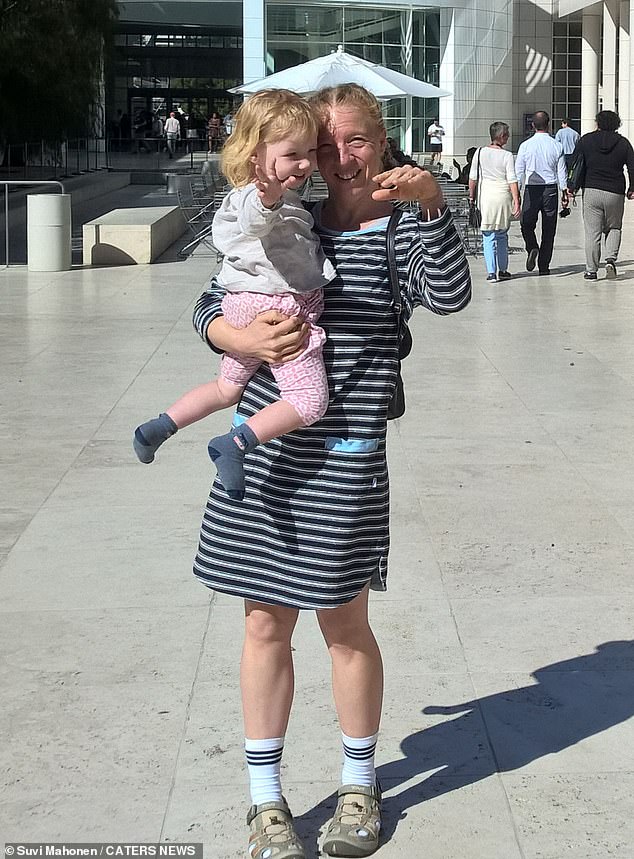 Suvi with Amity when she was a toddler. The pregnant mother-of-one admitted that if the last IVF round had not been a success, she would have stopped trying 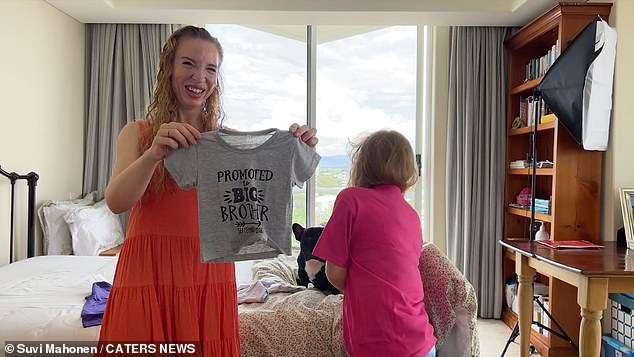 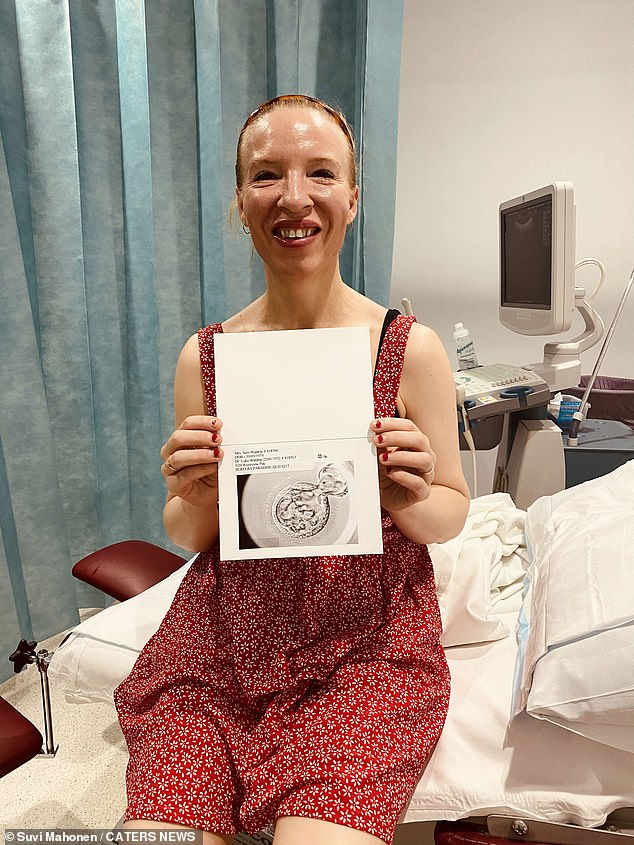 It’s official! Suvi holding a scan of her new pregnancy. She admitted that being pregnant is ‘anxiety-inducing’ after trying for so long

‘I would be reaching that stage where that literally would be it, “We had given it our best shot and we will just have to walk away and get our money back if it didn’t work”.

‘So that was why we chose to take one last chance.’

The couple took out loans to pay for their IVF journey, but Suvi who is expecting her little bundle of joy in December 2022, says it was all worth it.

She said: ‘We’re going to be paying off the debt for the rest of our lives, but I said to my husband, “I don’t care if we’re living in a tent, we just have our family”.

‘We’re at the age where we should own property by now, but we don’t because we prioritised our family.

‘It’s still early days, so there is a chance that something could go wrong, but we have another embryo already on ice and we have two more rounds with the OLGA clinic.

‘Until there is actually a newborn baby on your chest, it’s anxiety-inducing. But we are very hopeful with this pregnancy; the signs so far are good.

‘We’re pretty certain now, given this positive result, which is a huge step in the right direction, we’re pretty confident that at the end of the journey we will have our three kids, including our Bulldog Piper.’ 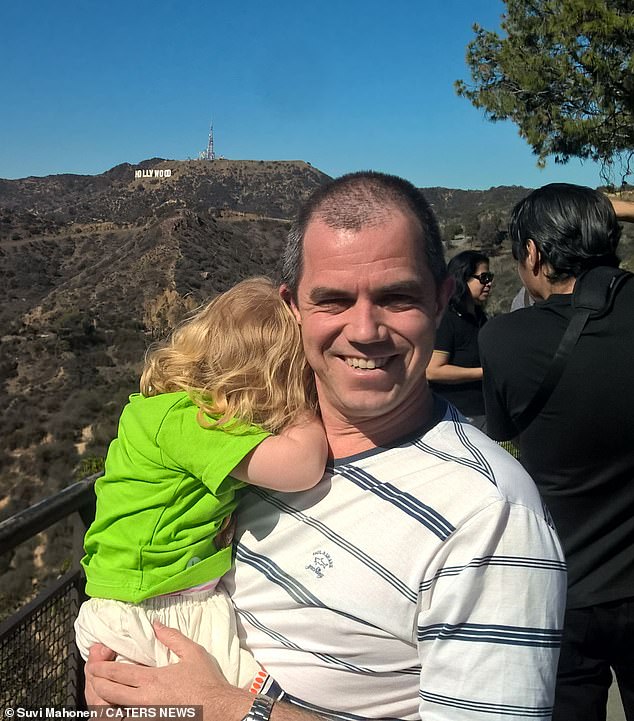 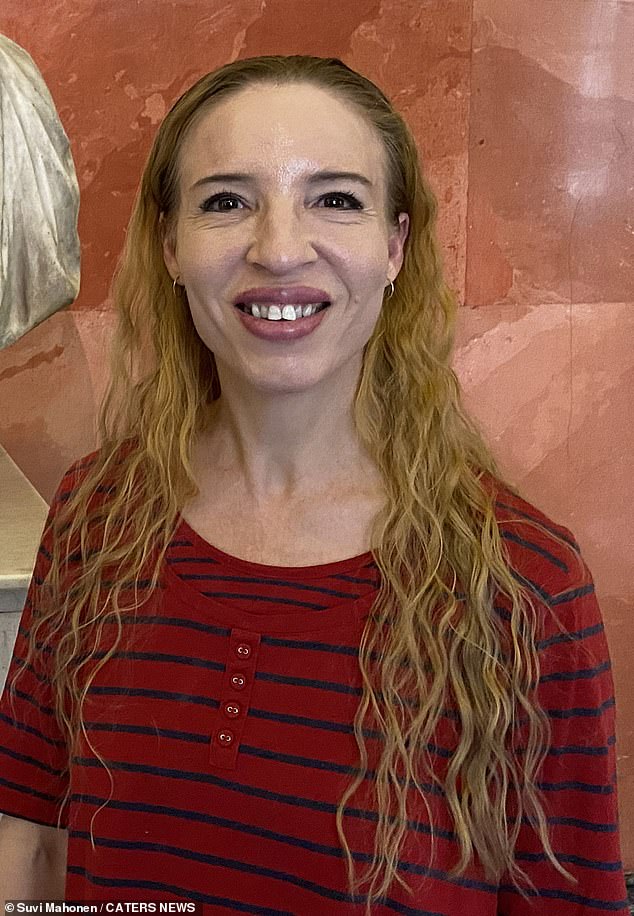 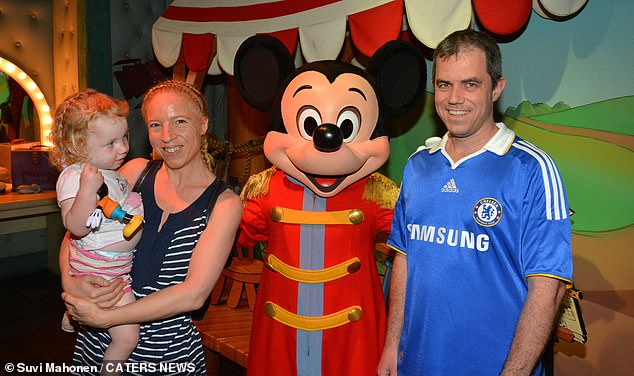 The couple in Disney World with Amity during a trip to the US when she was a toddler. The couple want to have three kids

Suvi and Amity in Disney. The couple had to take a loan to fund their IVF journey but say it was worth it 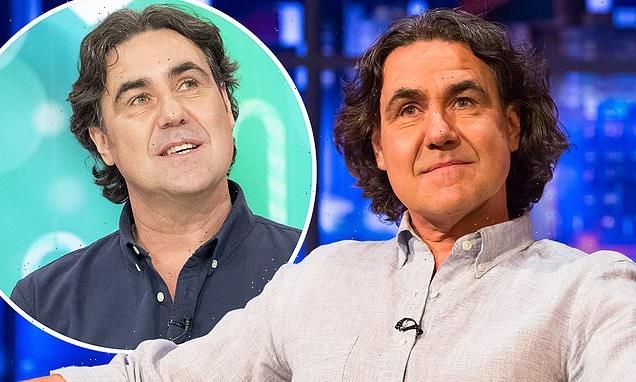