A mother has shared her anger after spending £4,000 to attend her cousin’s wedding in Australia – only to find out her five-month-old daughter wasn’t invited.

Posting on Netmums, the woman – who is based in the UK – explained how she was told about the nuptials a year in advance, booking flights for her family shortly after.

However, it was only when the official invitation arrived three weeks before they were due to fly that it materalised children were not invited to the big day.

On arriving to Australia, she was told by her relatives to find a babysitter for her baby daughter for the wedding.

Other members of the parenting forum admitted they would be ‘furious’ if they’d been put in that position, saying her cousin should have made an exception because they’d travelled all that way. 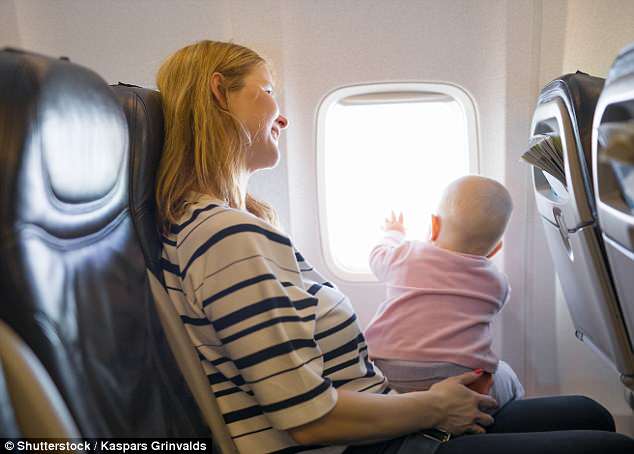 A mother has revealed how she spent £4,000 to attend her cousin’s wedding in Australia – only to find out weeks before that her five-month-old daughter wasn’t invited (file photo) 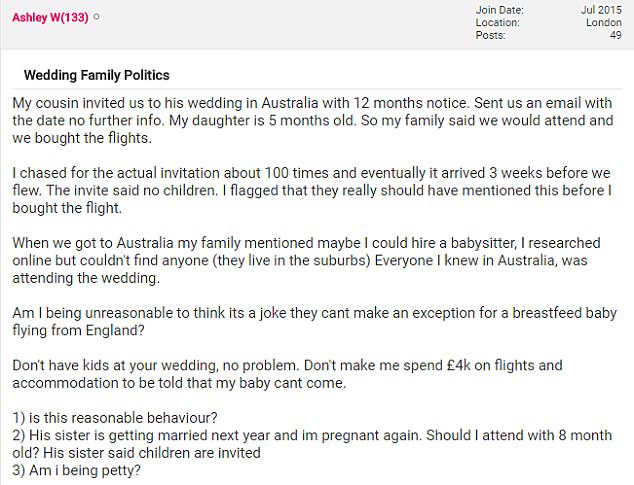 The Netmums user explained how she was told about the wedding 12 months in advance, but didn’t receive the official invitations until three weeks before

Posting under the username Ashley W, she explained: ‘My cousin invited us to his wedding in Australia with 12 months notice.

‘Sent us an email with the date no further info. My daughter is 5 months old. So my family said we would attend and we bought the flights.’

She continued: ‘I chased for the actual invitation about 100 times and eventually it arrived 3 weeks before we flew. The invite said no children. I flagged that they really should have mentioned this before I bought the flight.’

The mother explained how her family said she could ‘hire a babysitter’, but struggled to find one as he relatives lived in the suburbs – and ‘everyone [she] knew in Australia, was attending the wedding.’ 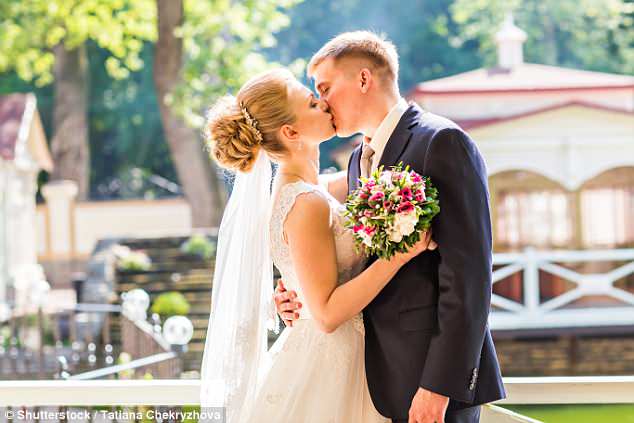 Once the invitation arrived, it materialised that children weren’t invited to the wedding (file photo)

She added: ‘Am I being unreasonable to think its a joke they cant make an exception for a breastfeed baby flying from England?

‘Don’t have kids at your wedding, no problem. Don’t make me spend £4k on flights and accommodation to be told that my baby cant come.’

Other Netmums members were quick to agree with the mother, admitting they would be ‘fuming’ as well.

One commented: ‘Omg! That’s ridiculous! You’re flying to the other side of the world….

Some suggested that she should take the baby along anyway, as she hadn’t been given enough notice

‘I personally wouldn’t at strangers to look after my child. I’d be fuming too! I totally get the no child thing…. I really do, but this is definitely an exception.’

Another added: ‘I’d be furious too. If couples don’t want children at their wedding that’s absolutely their prerogative but they need to make it clear in plenty of time for guests to make arrangements for childcare or decide not to go.’

Meanwhile, one person suggested she should take her baby anyway, posting: ‘If they didn’t give you adequate notice of this fact they can hardly object now can they?!

‘I would just ignore it tbh [to be honest] and take baby along, what else are you supposed to do now?’