Move over, Squid Game: Arhats are the next thing out of Korea

Each time the sick wife of a South Korean farmer visited a hillside, her health improved. In gratitude, the farmer decided to build a little temple on what he felt must be an auspicious hill.

He was levelling the land to do so in 2001 when he discovered strange stone fragments that resembled human heads. The farmer contacted authorities. He didn’t know it, but he had stumbled on fragments of Buddhist statues that had been buried for more than 600 years. 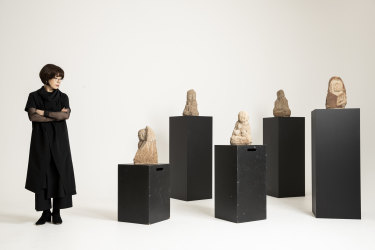 Powerhouse curator Min-Jung Kim with some of the arhats that will go on display next week.Credit:Louie Douvis

The pieces were found in a place known as Hill of Graves in mountainous Gangwon-do Province. Despite its forbidding name, the hill was rumoured by locals to have been the site of a sacred temple long ago.

As excavations continued, broken roof tiles were uncovered inscribed with the name of a temple. The local rumours had proved correct. Although the name of the forgotten Changnyeongsa Temple had appeared in 15th-century Korean records, until the roof tiles were found, no one knew its location. 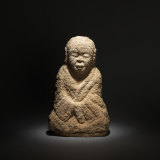 Each statue has a different face, expressing the gamut of human emotions. Credit:Louie Douvis

But the greatest treasures to emerge from the soil 150 kilometres south-east of the capital Seoul were more than 300 carved stone figures. Most were of sacred beings known as arhats; wise, compassionate beings considered to be the first disciples of the Buddha.

Each statue has a different face. Many are joyful, tranquil and pensive, but some appear grumpy or sad. Together they express the spectrum of human emotion. They were a major archaeological find.

Some of the statues are coming to the Powerhouse in an exhibition that gives a contemporary resonance to these ancient sacred figures. It is the first time the statues have left Korea.

For Min-Jung Kim, the Powerhouse’s curator of Asian Arts and Design, her discovery of the arhats was as fortuitous as the farmer’s. At an international museum conference in Kyoto in 2019, she encountered her former university teacher who gave her a little book with Buddhist teachings, poetry and images of figures. She was captivated.

But working on the Powerhouse’s major summer exhibition and choosing which 50 arhats to bring to Australia has been complicated by the pandemic. With international travel suspended, she was unable to travel to Korea to view the arhats and was even unsure at times if the exhibition would even go ahead.

“I had to work with that anxiety. Will it happen or not? Can they come or not? Will there be aeroplanes,” she says.

Amid the stress compounded by the pandemic, she found contemplating images of these gentle figures helpful and calming. She hopes visitors will find solace in them, too. 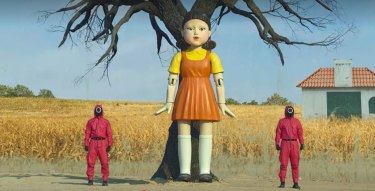 The exhibition arrives at a time when a fascination with all things Korean – from Squid Game and K-pop sensation BTS to the Oscar-winning Parasite – has so gripped the world it has spawned a word to describe it: hallyu. While the arhats reveal a different face of Korea’s rich culture, they share the accessibility that has made hallyu a global phenomenon.

Arhats are not gods, but humans who have attained a high spiritual state. They are considered more approachable and less ethereal or aloof than many Buddhist deities. And these simple, humble arhat figures with their life-like faces seem particularly approachable. Their bodies are indistinct; some seem to almost melt into the stone. They are neither ornately jewelled, elaborately costumed or multi-limbed as some Buddhist figures are. 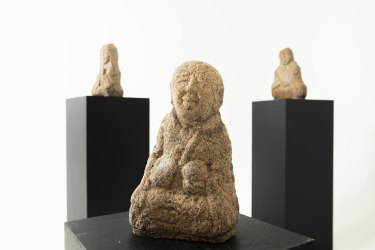 Arhats are not gods, but humans who have attained a high spiritual state, according to tradition.Credit:Louie Douvis

The statues are more than 700 years old and are believed to have been created during the Goryeo Dynasty between the 10th-14th centuries – the golden age of Buddhism in Korea. They range in height from 25-40 centimetres and were carved from granite quarried about 10 kilometres from where they were found. Altogether, 328 sculptures were discovered, of which 317 were arhat statues. There were probably many more since arhats are traditionally depicted in a group of 500.

Only 64 statues were intact. Many showed signs of wilful damage, including heads broken from their bodies. It is believed they were deliberately smashed by Confucian scholars during anti-Buddhist purges around the 15th century during the Joseon dynasty. By then, Confucianism had replaced Buddhism as the state religion. In Buddhist tradition, sacred statues and ritual items are never deliberately broken or discarded like rubbish; they are treated with reverence, often ritually buried amid much ceremony.

It is likely the statues were modelled on real people, says Kim. Their faces are so familiar and realistic that Koreans today recognise them as resembling people from the province in which the statues were found.

“The carvers – there would have been more than one carver – probably based them on people they knew,” she says. “They look like people from Gangwon-do.”

‘The carvers probably based them on people they knew. They look like people from Gangwon-do.’

Buddhism has long taken on the features – physically and philosophically – of the lands through which it has travelled. From its birthplace in the Himalayan foothills around 500 BCE, Buddhism entered China via Gandhara (present-day Pakistan and northern Afghanistan) along the Silk Road, shifting shape as it spread across Asia. Early Buddhist statues of Gandhara – all rippling muscles and moustaches – look vastly different from those encountered in other lands through which the creed spread, including Thailand, Japan and Korea. 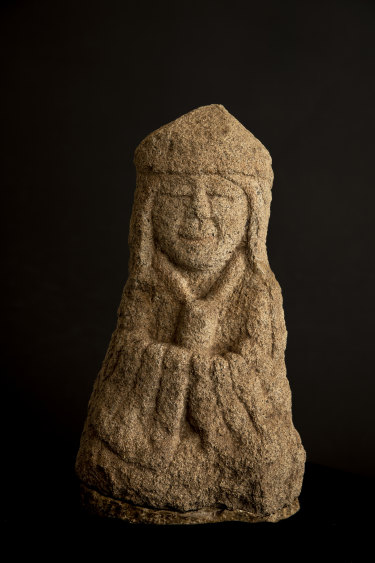 Arhats were originally displayed in shrines and were regarded as having supernatural powers. Credit:Louie Douvis

At the core of Buddhism is an understanding that everything changes, impermanence is at the heart of existence. But different forms of Buddhism have developed, often integrating aspects of the local culture where it has taken root.

So too, the role and significance of an arhat, a Sanskrit word for “deserving respect”, varies in different countries and traditions. In China, the figures are known as lohans and have integrated elements of Daoism, while in Korea, arhats are associated with Zen Buddhism.

Some of the little stone figures wear a monk’s robe – or gasa – over their heads and are quietly engaging in Zen practice. They would have originally been housed in a shrine within the temple, says Kang Samyhe, curator of the Chuncheon National Museum, where the statues are now part of its collection. Worshippers would have regarded them as having supernatural powers and appealed to them to bestow good fortune, rain or even protection from thieves.

Kang, who has studied the statues for more than a decade, says what distinguishes these figures is their human expressions. Typically, the features of arhats are exaggerated and unrealistic.

After years of research and conservation, the figures went on public exhibition in Korea for the first time in 2018. They are being loaned to Australia to mark the 60th anniversary of diplomatic ties between the two countries.

When Seoul-based visual artist Kim Seung Young first saw the arhats, they were displayed in cases as traditional museum objects. He wanted to get them out from behind glass so people could experience them directly.

He has created two rooms for the 50 arhats loaned for the exhibition. One room evokes a forest, the other a city. In the first, entitled Faces of Arhats, between earthly and saintly they stand on pedestals, like trees. Visitors are encouraged to walk around and look at their expressions. A soundscape of birdsong, rustling trees and smells conjure the natural world.

The second room, entitled Arhats of Daily Introspection, evokes the high-rises and chaos of a metropolis. The arhats and a single Buddha are displayed among banks of stereo speakers. The artist’s inspiration came from a visit to New York and the biblical Tower of Babel.

‘I struggled because I did not speak English. My friend told me people around me were not just speaking English, but many languages,’ he says through a translator.

The speakers emit a cacophony of noise – the buzz of contemporary life. Yet amid them are sounds associated with Buddhism, including bells and water. The idea conveyed is that even in the chaos and distractions of a cosmopolitan city, the Buddha is present.

Debate has swirled about the exhibition of ancient sacred objects in secular museum spaces. How are they to be understood?

“Artists can give the audience access to the story of an object in new ways,” Havilah says. “Sometimes when we look at artefacts, they are stuck in their time or place. (Kim Seung Young) has allowed them to move through time in a very interesting way.”

Debate has swirled in recent years about the place and exhibition of ancient sacred objects, particularly from non-Western traditions, in secular museum spaces. How are they to be understood? The arhats were once objects of devotion, but what can a contemporary audience draw from them?

“I think objects can be read in multiple ways,” says Havilah. “We want to make sure there’s enough of an unmediated experience between the person and the object, (so) the person can bring their own story to those objects.

“If you come to those objects as a Buddhist, from that cultural position you would read the object in a different way … We don’t want to instruct a reading, which historically is what museums do. Contemporary museums let the objects tell their stories and support those stories but don’t direct a reading.”

She hopes the exhibition will encourage visitors to take a breath from everyday life.

“Great museum experiences offer the opportunity to step outside your life for a minute,” she says. “I think this project will do that.”

A program of events is planned, including a ceremony to mark the Buddha’s birthday, the most sacred day on the Buddhist calendar, shortly before the exhibition ends in May. It is hoped the resumption of international travel will enable Kim Seung Young to give an artist’s talk in Sydney during the exhibition.

Meanwhile, the arrival of these endearing, gentle arhats feels providential. As we emerge from the emotional rollercoaster or our long, wearying confinement, they offer a benevolent welcome.

The 500 Arhats of Changnyeongsa Temple opens at the Powerhouse on December 2 and runs until May 15, 2022.

TV, movies, Find out the next TV, streaming series and movies to add to your must-sees. Get The Watchlist delivered every Thursday.