Model Munroe Bergdorf makes peace with L’Oreal Paris after brand’s president expresses ‘regret’ over ‘silencing’ her for speaking out on racism in 2017 – and pledges €50,000 to black and transgender charities

Transgender model and activist Munroe Bergdorf has made peace with L’Oreal Paris after accusing the beauty brand of being ‘racist snakes’ over its support of the Black Lives Matter campaign.

The 32-year-old British model briefly worked with the brand in 2017 but parted company acrimoniously with them after she wrote about white supremacy.

Old wounds resurfaced when L’Oreal Paris posted on social media about the Black Lives Matter campaign post last week, saying: ‘Speaking out is worth it’.

At the time, Bergdorf responded on her Instagram page, telling her 260,000 followers: ‘Excuse my language but I am SO angry. F*** you.

‘You dropped me from a campaign in 2017 and threw me to the wolves for speaking out about racism and white supremacy.’

However, today, the model revealed bridges had been built with her former employer after new Brand President Delphine Viguier ‘reached out’ to her.

Bergdorf said the pair had shared an ‘open and constructive’ conversation while Viguier expressed ‘regret’ that the model had felt previously ‘silenced’ by the beauty goliath. 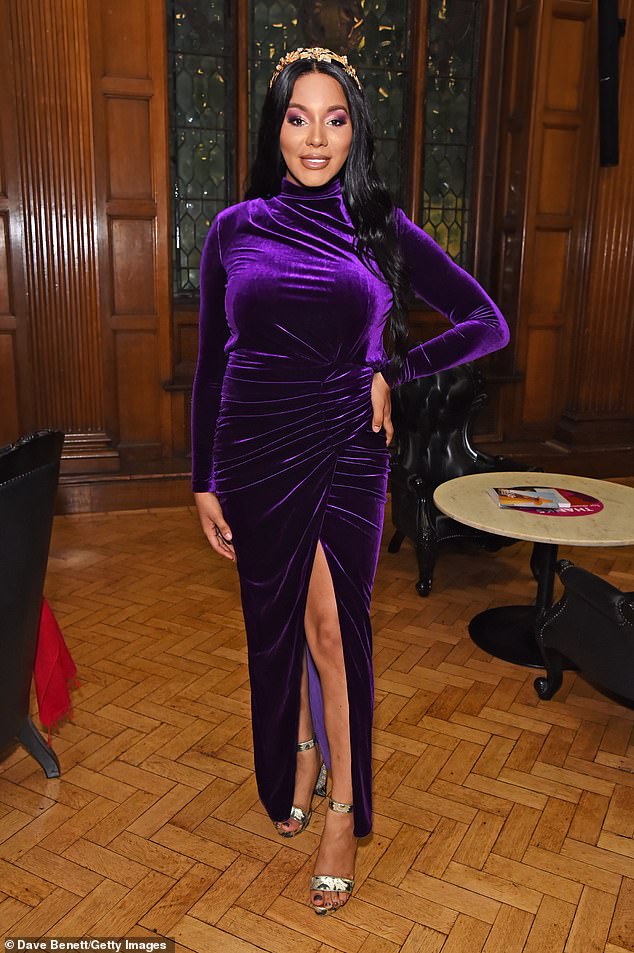 Transgender British model, Munroe Bergdorf, has revealed she’s built bridges with one-time employer L’Oreal Paris after she criticised the brand earlier this month over its support for the Black Lives Matter campaign. In 2017, days after being introduced as the brand’s ‘face of modern diversity’ Bergdorf was dropped after speaking out on white supremacy 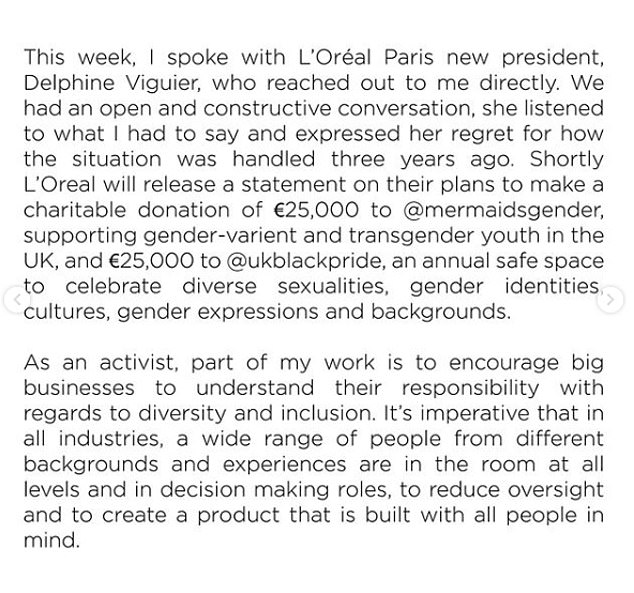 The statement published by Bergdorf on social media today; the transgender model said L’Oreal Paris had reached out to her and they’d had an ‘open and constructive conversation’ about their dispute three years ago – with both parties vowing to move forward 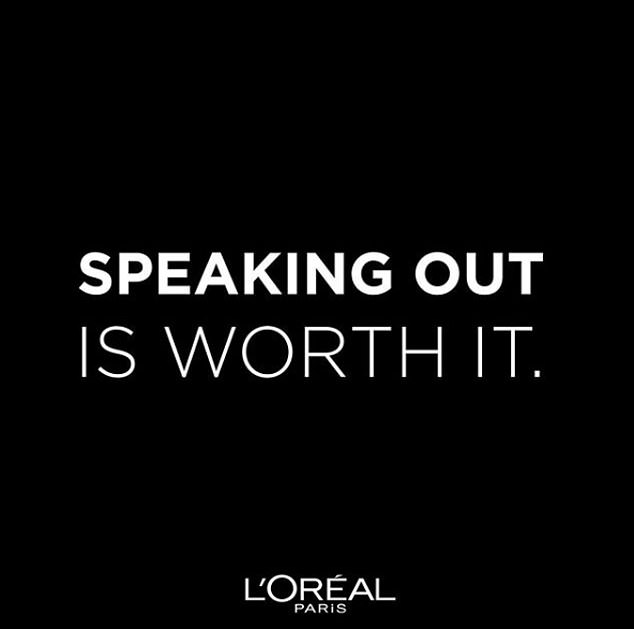 L’Oreal Paris’s post is support of the Black Lives Matter campaign following the protests around the world in response to the death of George Floyd; Bergdorf had called the company ‘racist snakes’ but said today that she was looking forward to a new and positive relationship with L’Oreal Paris 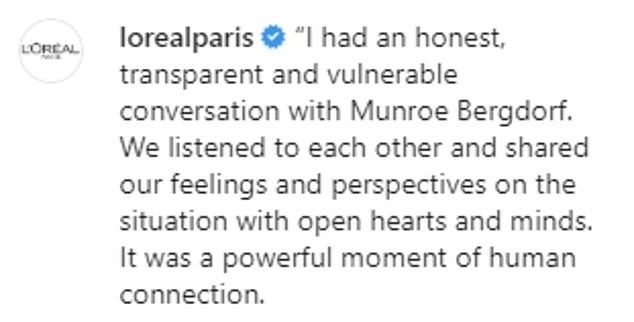 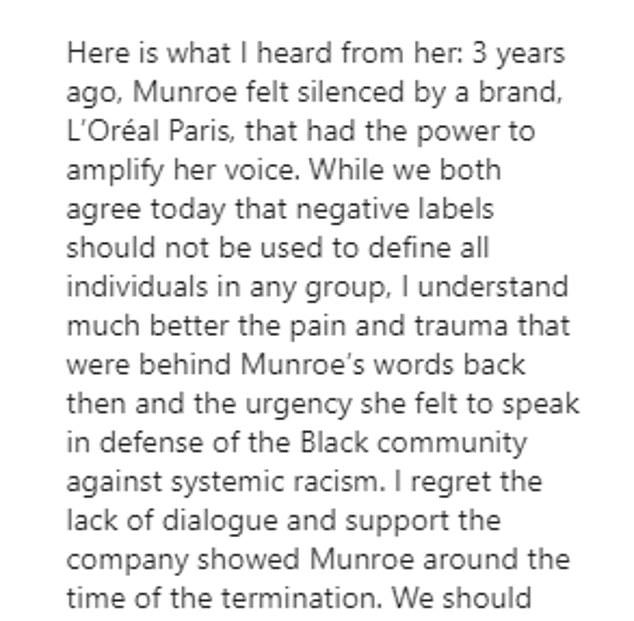 Brand President Delphine Viguier ‘reached out’ to the model after Bergdorf’s criticism of the brand last week, saying she understood the ‘pain and trauma’ that had been behind her words

Munroe wrote earlier: ‘We had an open and constructive conversation, she listened to what I had to say and expressed her regret for how the situation was handled three years ago.’

In 2017, Bergdorf was introduced by L’Oreal as the ‘face of modern diversity’.

However, days after she was announced as the brand’s first transgender model, Bergdorf wrote online about racism and white supremacy – and was quickly dropped from the lucrative role, with the company saying Bergdorf’s comments were ‘at odds’ with their values.

Posting about the fall-out on the L’Oreal Paris Instagram page and how they’ve reconciled, Brand President Viguier wrote: ‘I had an honest, transparent and vulnerable conversation with Munroe Bergdorf. We listened to each other and shared our feelings and perspectives on the situation with open hearts and minds. It was a powerful moment of human connection.’

She said she regretted ‘the lack of dialogue and support the company showed Munroe around the time of the termination. We should have also done more to create a conversation for change as we are now doing.’

Viguier added: ‘We will honor Munroe’s advocacy for both the Trans and Black communities. L’Oréal will be donating to associations that support social justice and causes that are deeply personal to Munroe’s experience.’ 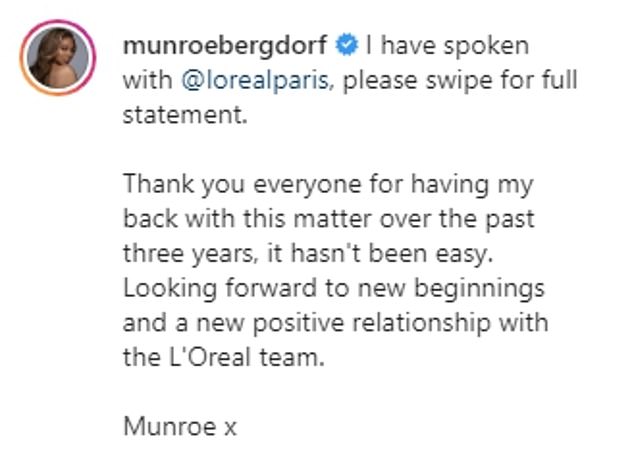 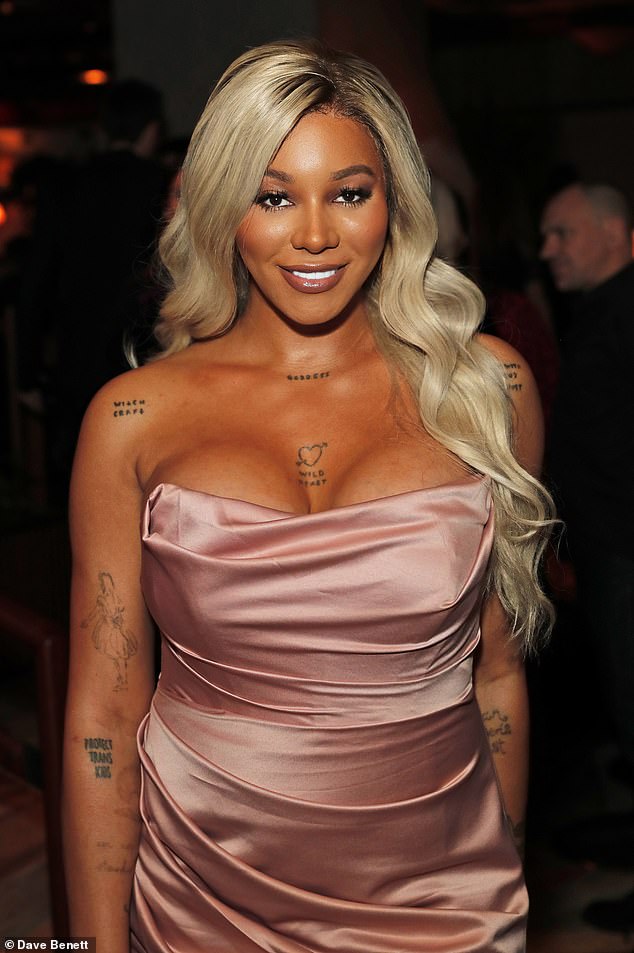 Speaking last week about L’Oreal Paris’ post on Black Lives Matters and the termination of her contract with them in 2017, Bergdorf had been unflinching, writing: ‘With no duty of care, without a second thought. I had to fend for myself being torn apart by the world’s press because YOU didn’t want to talk about racism.

Bergdorf, who had said she was in ‘floods of tears’ writing, added: ‘THAT is what you get for ‘speaking out’ when employed by L’Oreal Paris. Racist snakes.’

She wrote: ‘Where was my support when I spoke out? I’m disgusted and writing this in floods of tears. If you care about me or #blacklivesmatter, don’t let @lorealparis get away with this.’ 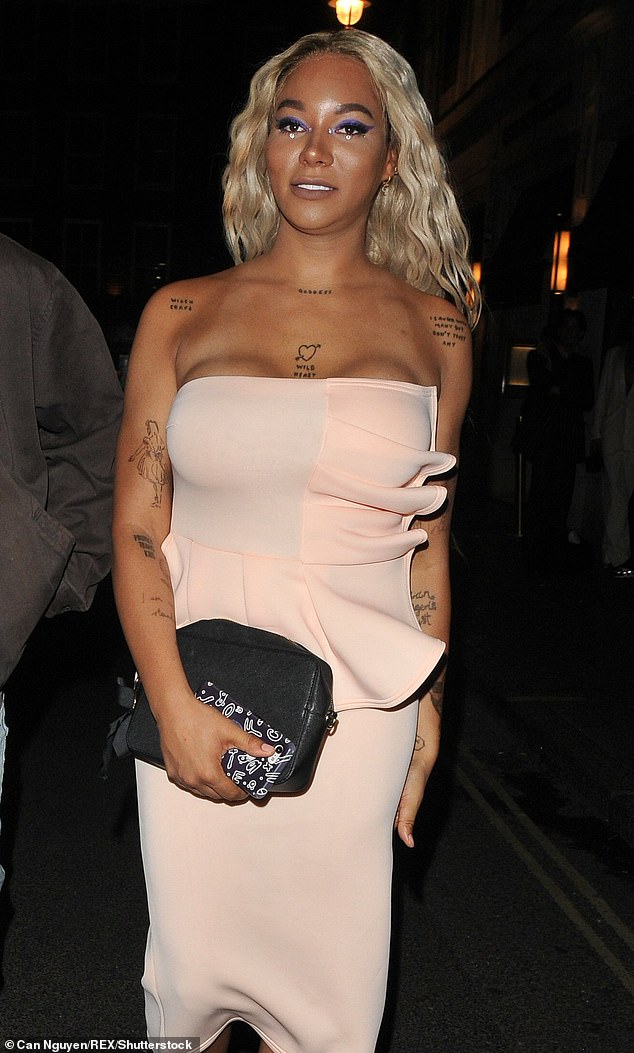 Bergdorf told her 260,000 on Instagram that she had ‘no support’ from the brand when she spoke out against racism; at the time L’Oreal Paris said the model was at ‘odds’ with its values

In 2017, Bergdorf wrote about white supremacy shortly after taking on the L’Oreal Paris role.

She wrote: ‘Because most of ya’ll don’t even realise or refuse to acknowledge that your existence, privilege and success as a race is built on the backs, blood and death of people of colour. Your entire existence is drenched in racism. From micro-aggressions to terrorism, you guys built the blueprint for this s***.

‘Come see me when you realise that racism isn’t learned, it’s inherited and consciously or unconsciously passed down through privilege.

‘Once white people begin to admit that their race is the most violent and oppressive force of nature on Earth… then we can talk.’

L’Oreal said at the time: ‘We support diversity and tolerance towards all people irrespective of their race, background, gender and religion.

‘The L’Oréal Paris True Match campaign is a representation of these values and we are proud of the diversity of the Ambassadors who represent this campaign.

‘We believe that the recent comments by Munroe Bergdorf are at odds with those values, and as such we have taken the decision to end the partnership with her.

‘L’Oréal remains committed to celebrating diversity and breaking down barriers in beauty.’