Netflix viewers praise ‘amazing’ new miniseries Unbelievable – insisting the show, which is based on a true story, is a ‘perfect depiction of how some rape cases are handled’ and should be ‘mandatory watching’

Streamers are giving rave reviews to Netflix’s new limited series Unbelievable and passionately urging others to add the show to their own watch lists.

The eight-episode miniseries, which premiered on September 13, follows the true story of a series of rapes that took place in Washington state and Colorado between 2008 and 2011.

The story — which includes the infuriating way that detectives didn’t believe one teenage victim and charged her with making a false rape report — has captivated audiences, with many viewers saying the show should be required viewing for anyone who doesn’t understand why so many victims don’t report rape in the first place. 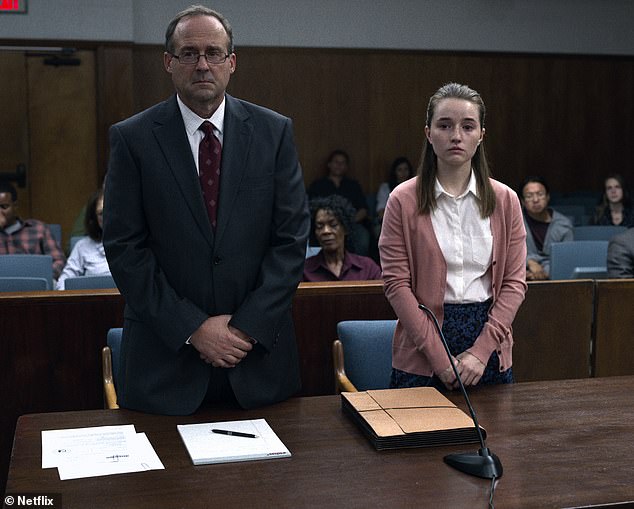 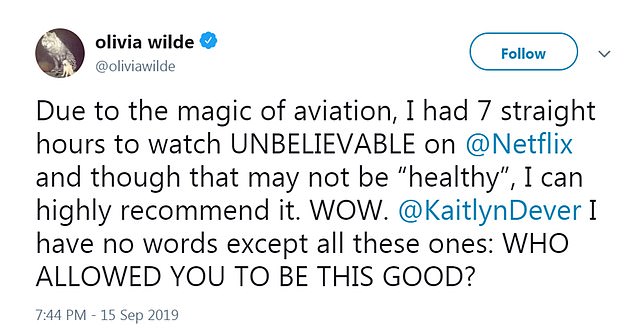 So good! Fans, including actress Olivia Wilde, are raving about the series on Twitter 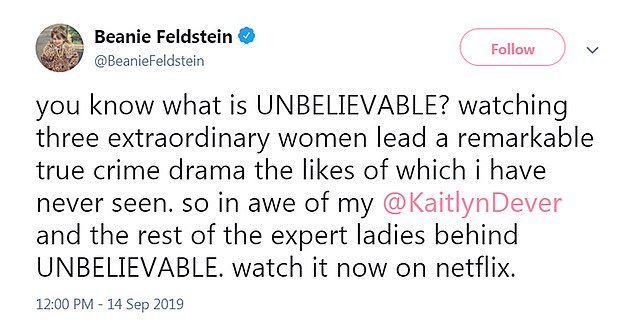 So in awe: Actress Beanie Feldstein also encouraged her followers to watch it 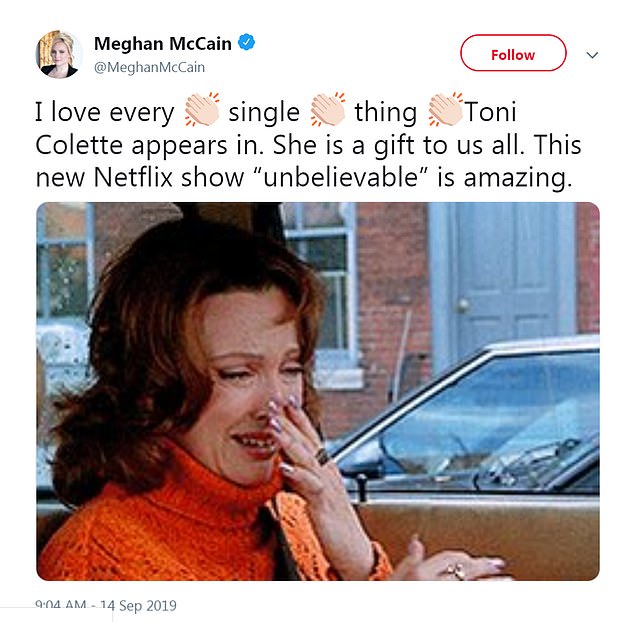 Unbelievable is based on a Pulitzer Prize-winning article published by ProPublica in 2015. It recounts how an 18-year-old named Marie bound and raped at knifepoint in Lynwood, Washington in 2009.

However, when police presented her with inconsistencies in her story — ‘bullying’ and ‘hounding’ her — she eventually recanted.

They then charged her with false reporting, and she took a plea deal the entailed counseling, probation, and paying court fees.

Marie’s rapist went on to rape five other women before getting caught, and later the officers who charged her investigated and found to have ‘coerced [her] into admitting that she lied.’

That story plays out in Unbelievable, which has clearly struck a chord with many viewers.

Many are enraged on Marie’s behalf, and are pointing to it as the ultimate example of why so many victims don’t report rape and sexual assault.

‘The first episode made me so angry and ppl wonder why so many never go to the police. Watching that girl go through all of that was so sad smh,’ wrote one Twitter user. 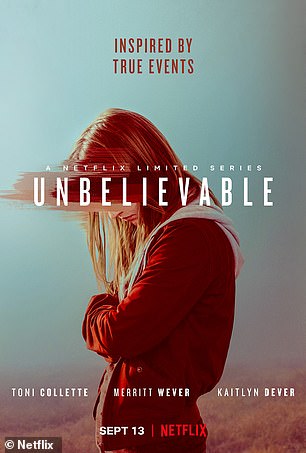 True events: The series is based on a Pulitzer Prize-winning 2015 ProPublica article about a teen who was raped in Washington and charged with false reporting

Many are saying that it should be required viewing and may help rape skeptics better understand what the aftermath of a rape is actually like for victims.

‘The first 15 min of #unbelievablenetflix should be mandatory watching for all the a**holes who always say “why didn’t she report it!” when it comes to rape victims,’ wrote one viewer.

‘If you have the guts to face how women who report sexual violence are treated by law enforcement, how they are humiliated, antagonized and abandoned by the legal system, and how sometimes it takes women to bring justice to women, please watch,’ added another.

‘The series #unbelievablenetflix is a perfect depiction on how some rape cases are handled. My case was closed because there was alcohol in my system. That was the reasoning,’ tweeted one more fan.

Others used current events to underline the importance of watching.

‘Everyone who mocked Dr. Christine Blasey Ford should be forced to watch S1E1 of #unbelievablenetflix,’ tweeted one.

The show has celebrity fans, too, with many lauding the storytelling and acting in the miniseries. 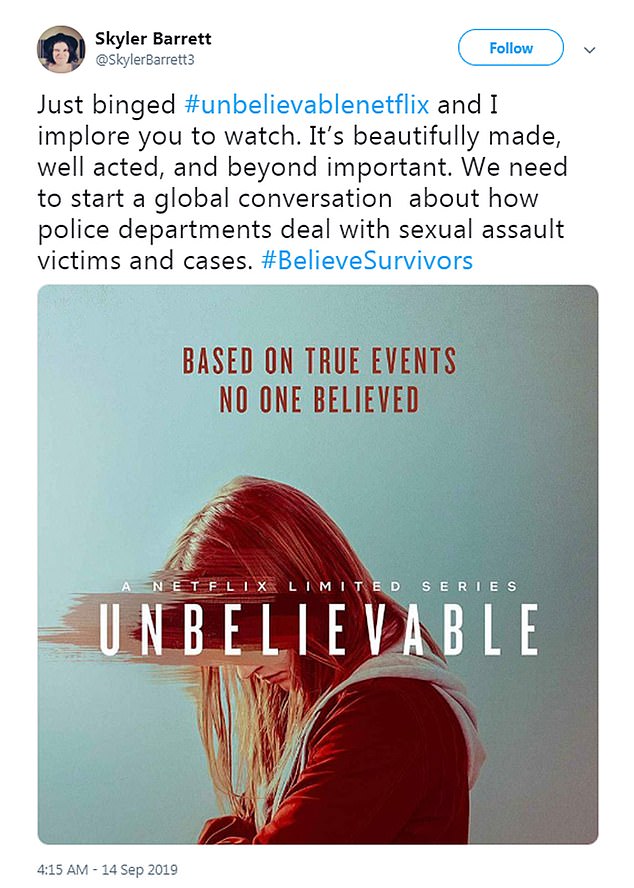 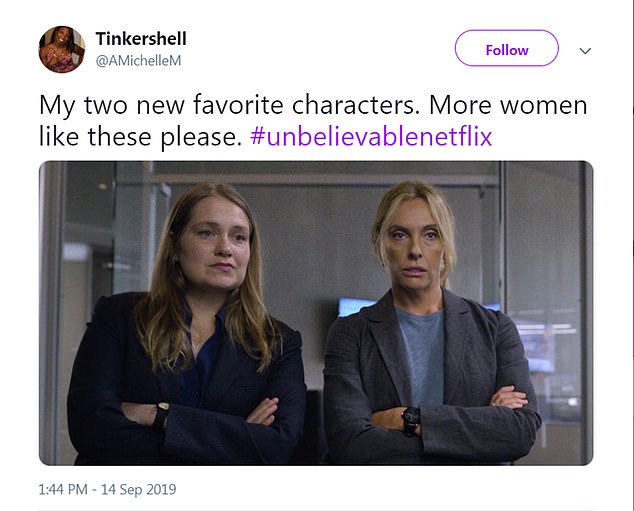 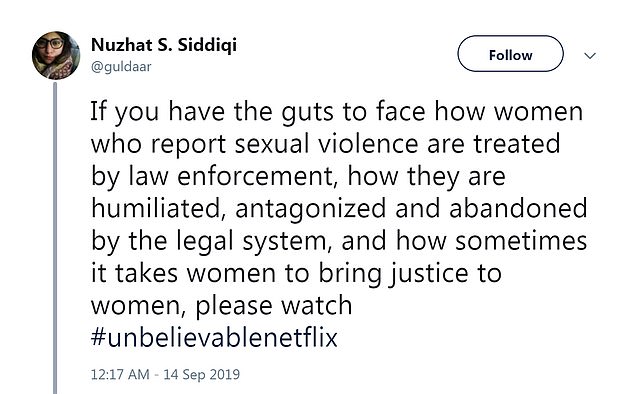 Powerful: The show has clearly struck a chord with many viewers

‘You know what is UNBELIEVABLE?’ wrote actress Beanie Feldstein. ‘Watching three extraordinary women lead a remarkable true crime drama the likes of which i have never seen. so in awe of my @KaitlynDever and the rest of the expert ladies behind UNBELIEVABLE. watch it now on netflix.’

‘I love every single thing Toni Colette appears in. She is a gift to us all. This new Netflix show “unbelievable” is amazing,’ tweeted Meghan McCain.

‘Due to the magic of aviation, I had 7 straight hours to watch UNBELIEVABLE on @Netflix and though that may not be “healthy”, I can highly recommend it. WOW. @KaitlynDever I have no words except all these ones: WHO ALLOWED YOU TO BE THIS GOOD,’ added Olivia Wilde.

Though Netflix doesn’t release viewer numbers for its releases, Unbelievable currently has a 94 per cent rating on Rotten Tomatoes.

It’s been called ‘must-watch TV’ by Vox, a ‘radical, exceptional crime series’ by Vulture, and ‘horrifying and in equal measure exciting, in a way that is likely to leave you both appalled and satisfied by the end’ by the New York Times.