The scheme, which replaces furlough from November 1, lets Brits return to work for just 20% of their usual hours and still qualify for help. 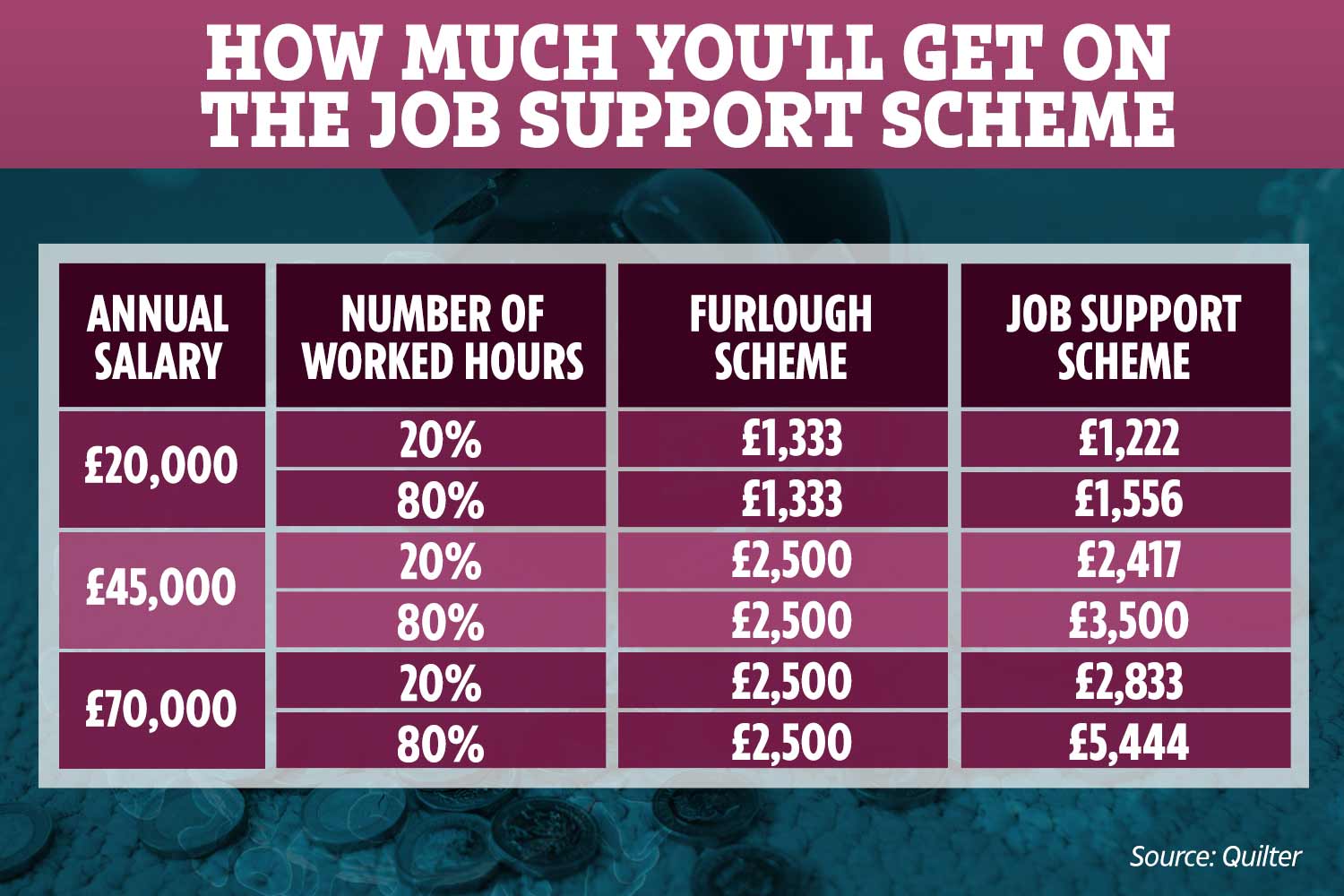 Employees who are brought back part-time will be paid in full for the hours they work.

Brits earning £20,000 a year and returning to work 20% of their usual hours would earn just £1,222 per month before tax on the Job Support Scheme.

This compares to a higher £1,333 a month while on furlough, financial services firm Quilter has found. 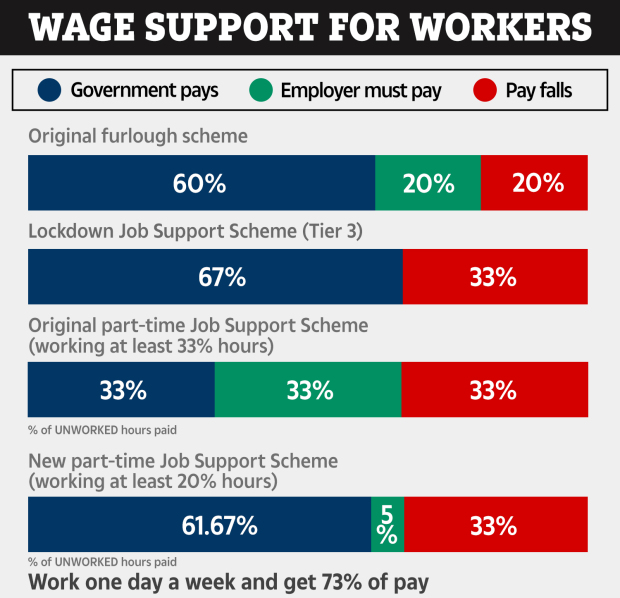 In comparison, someone earning £70,000 and working the same amount of hours would receive £2,833 in pay before tax on the Job Support Scheme – a rise from £2,500 on furlough.

Higher earners benefit under the Job Support Scheme due to the monthly cap on the furlough scheme.

There's no monthly cap on the Job Support Scheme as such, but employer and government contributions are capped on hours not worked.

What is the Job Support Scheme?

THE furlough scheme will be replaced by the Job Support Scheme (JSS) from November 1 for six months.

It's more complicated than the furlough scheme, with different levels of support depending on the businesses' needs.

But overall, the idea is that it keeps workers in "viable" jobs even if their hours are reduced due to a drop in demand throughout colder months.

Anyone who is in employment as of September 23 can be put on the scheme – and it's open to all small and medium-sized businesses who didn't apply to furlough before.

Staff on any contract are eligible, even those on zero hours or agency workers.

"As a general rule, for those people earning £40,000 and over that were hitting the £2,500 monthly limit under furlough, they will now have the opportunity to break free of that limit under the new scheme and boost their monthly income.

"The switch from furlough to this new scheme is certainly favourable for higher earners that were receiving a smaller proportion of their monthly income under the cap on furlough payments."

He added that wealthier employees may even use the opportunity to take partial retirement under better terms than usual.

Mr Browne said: "Older workers may fear an increased risk of redundancy and could find it harder to get back into a new role even once the economy recovers.

"So the opportunity to remain with their current employer under reduced hours may really appeal."

A government spokesperson told The Sun: “The Job Support Scheme includes a cap on government and employer contributions so that anyone earning above a salary of £3,125 a month will receive a smaller proportion of their prior salary than a lower earner, unless the employer voluntarily topped up the wages of the higher earner.”

"Our focus from the outset has been on supporting those in need – and this support will continue as we look to create, protect and support jobs."

The furlough scheme is coming to an end on October 31, having supported more than 9million jobs during the pandemic.

Earlier this month, Chancellor Rishi Sunak announced that self-employed workers will able be able to benefit from a government grant of up to £3,750 – double the support of what was on offer before.

The Treasury previously said it would cover 20% of average monthly profits, up to a total of £1,875, covering November to January next year.