Pippa Middleton became a mum for the first time just over a week ago, and it seems that she is taking to motherhood like a duck to water.

The Duchess of Cambridge’s younger sister was spotted for the second time since her son’s birth on Tuesday.

The 35-year-old headed out for an early morning stroll through her Chelsea neighbourhood accompanied by her two dogs a Labrador and a Cocker Spaniel named Rafa.

However, with her hands full with her newborn baby Pippa invited a pal along to help her with the dogs as they joined the brisk morning air near her £17million west London home which she shares with husband James Matthews. 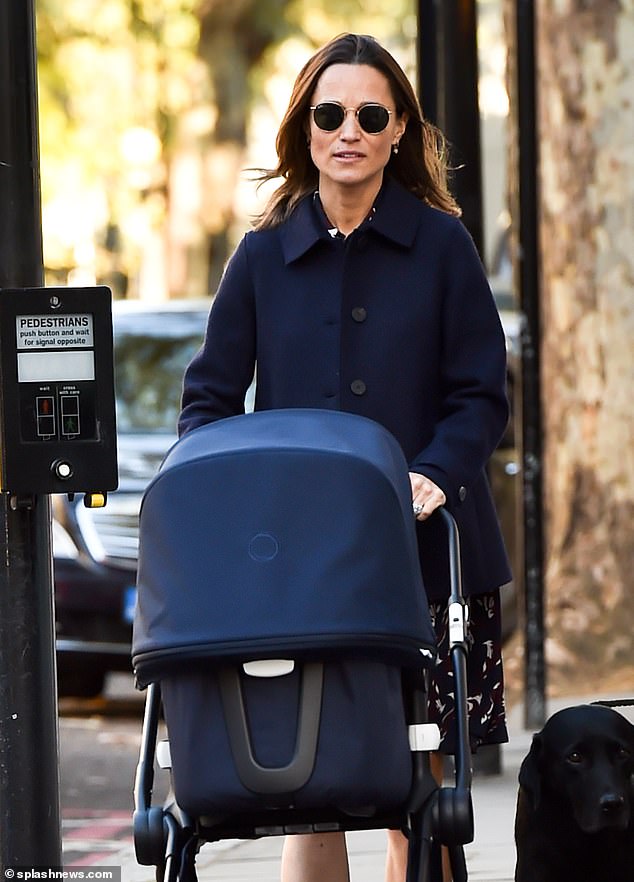 Pippa looked typically chic in a £283.45 printed dress by the late designer Kate Spade as she pushed her £1,119 pram through leafy Chelsea.

Kate Spade has proven to be a hit with the new mother who was spotted wearing a £350 day dress with ruffle detailing by the same designer on Sunday.

The new mother kept out the October chill in a cropped navy blue jacket and opted for a pair of practical white sneakers from Jimmy Choo costing £350.

As is typical of the new mother, Pippa wore a pair of chic shades to complete her ensemble.

She is thought to have walked from her Chelsea home to Brompton Cemetery this morning.

The mother-of-one stopped of at the North Lodge cafe in the West Brompton park to pick up a coffee on her journey.

This is the second time the mother has been spotted since the birth of her son having stepped out for a stroll accompanied by the baby’s father James on Sunday. 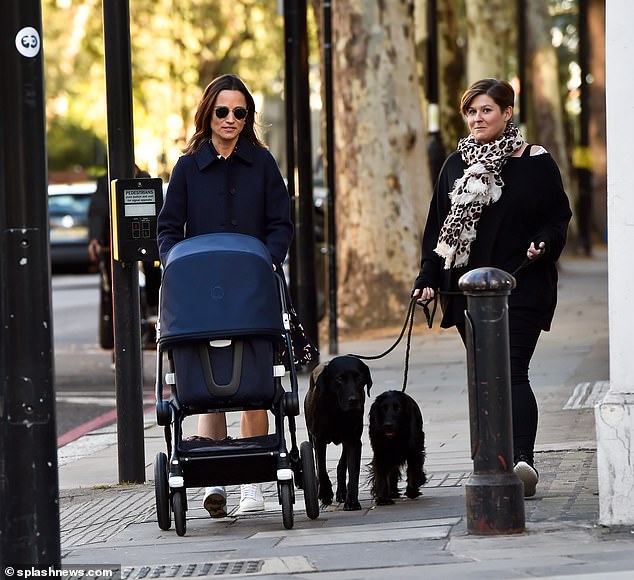 The Duchess of Cambridge’s younger sister was joined by an acquaintance who helped her out by walking her two dogs, a black Labrador and a Cocker Spaniel 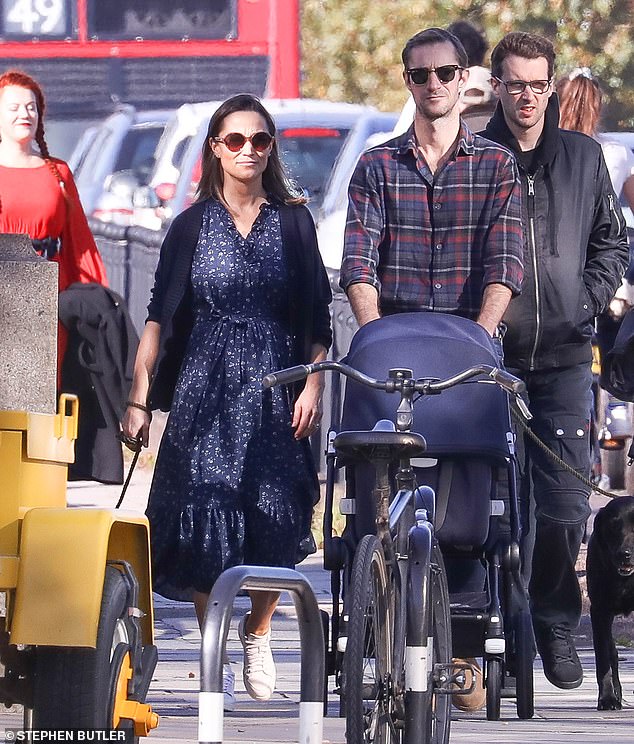 Pippa was spotted taking a walk with her husband James Matthews on Sunday, opting for a dress by her favourite Kate Spade once again 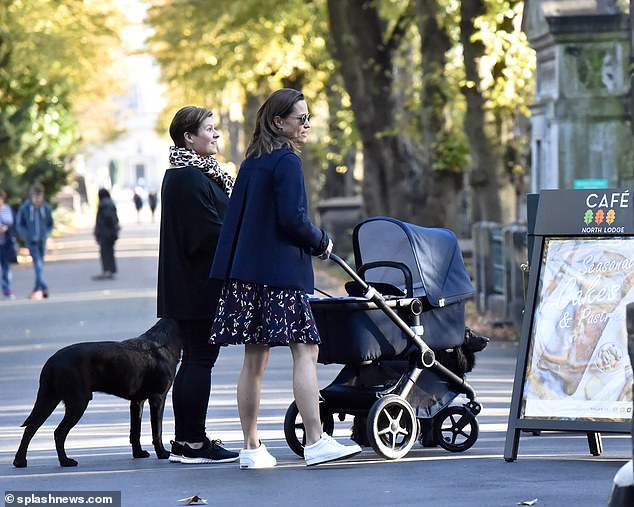 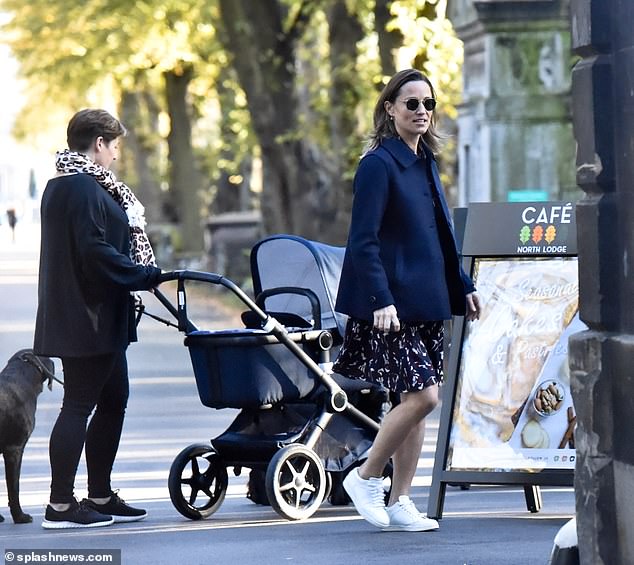 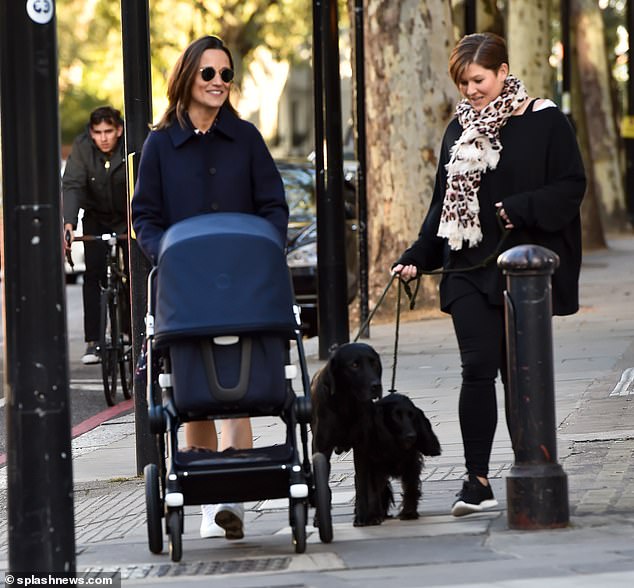 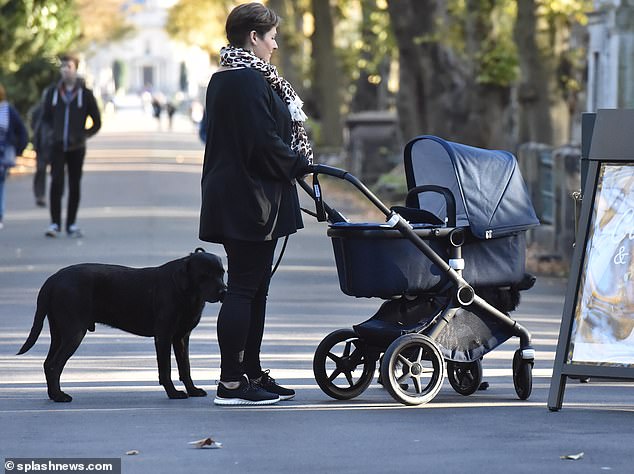 The couple, who married in May last year, were the picture of domestic bliss as they made their first outing as parents just two days ago.

Pippa and James welcomed a baby boy weighing 8lb and 9oz at the private Lindo Wing, at St Mary’s Hospital, Paddington, on October 15, but his name has not yet been revealed.

The Matthews’ baby was delivered at the £7,500-a-night private maternity unit where the Duchess of Cambridge gave birth to her three children.

He was born on the same day the Duke and Duchess of Sussex announced they are expecting their first child together in Spring 2019. 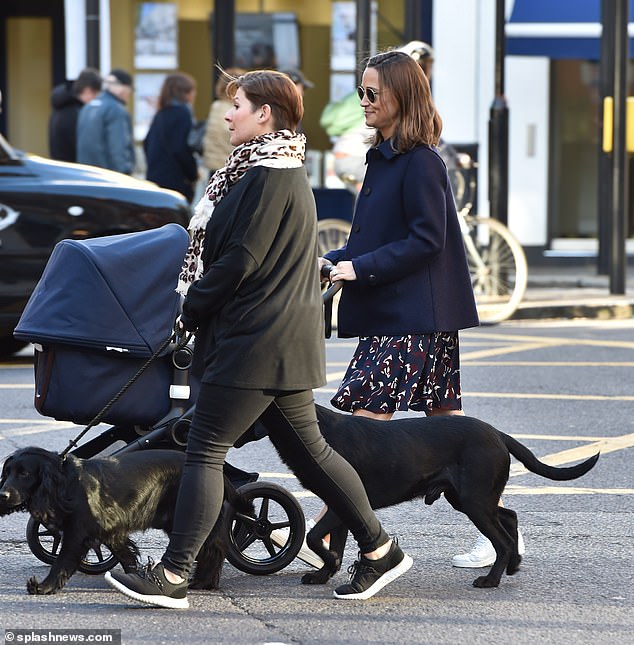 Pippa’s pushchair is the luxury Bugaboo Fox Classic in navy is priced at £1,119 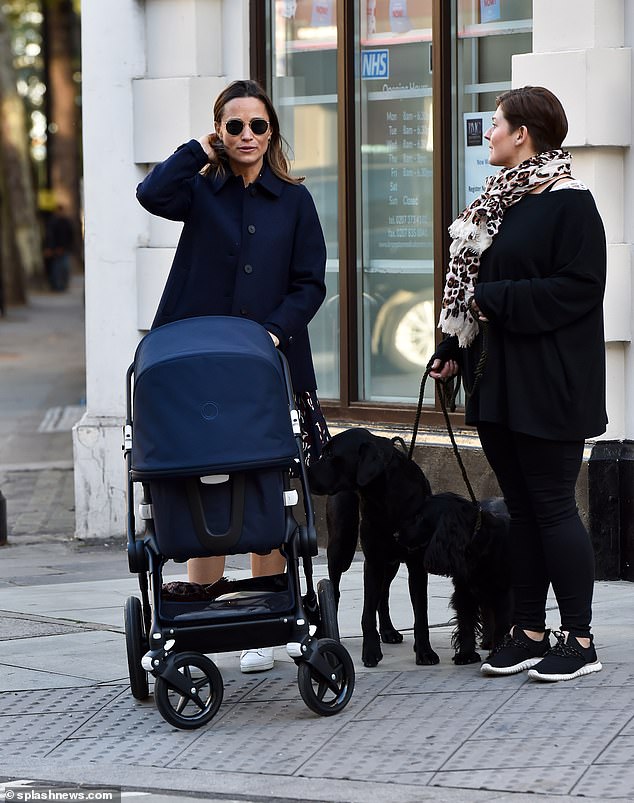 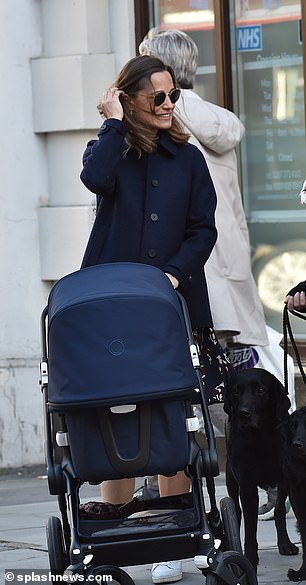 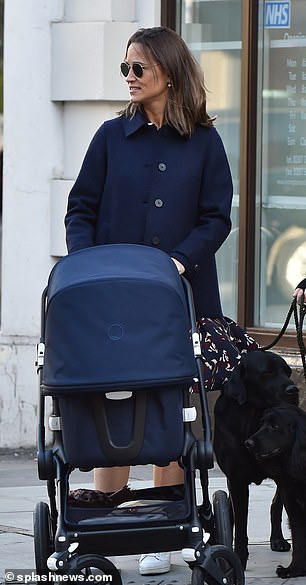 Pippa appeared to be in high spirits, flashing a smile as she embraced the breezy autumnal weather 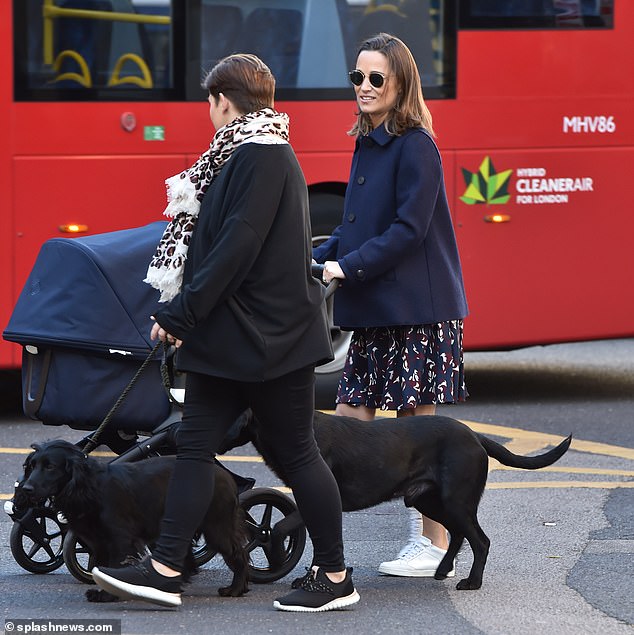 James Middleton, 31, Pippa’s younger brother, was the only member of the family seen visiting the new arrival in hospital.

Pippa and James are believed to have left the hospital through a side door on Tuesday night and quietly returned to their newly-renovated family home.

Proud grandmother Carole Middleton, 63, was seen visiting the lavish mansion on Friday, armed with a lavish hamper and a box from baby gifts company My 1st Years.

Kate hasn’t been seen visiting her new nephew yet, but may well have already paid a visit to Pippa and her son either in the Lindo Wing at St Mary’s Hospital itself, or at her home.

Kensington Palace declined to comment on whether the Duke and Duchess have met the baby. 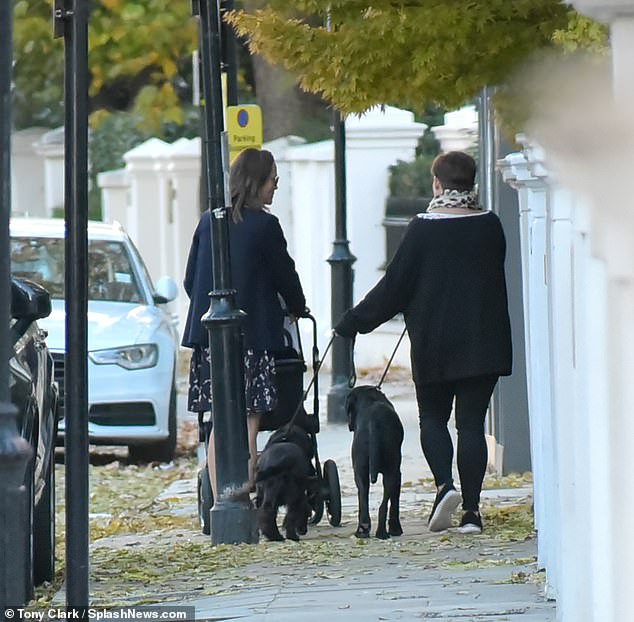 James Matthews was likely back in the office today, as he was seen returning to work just a few days after the birth of his son 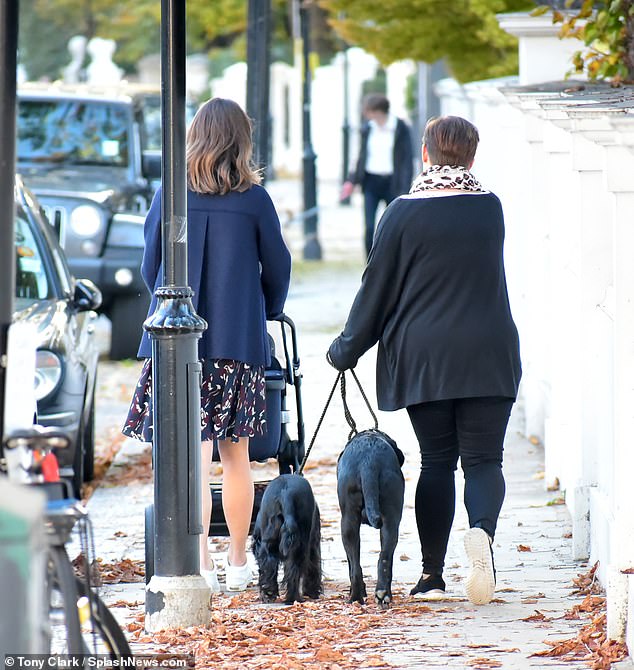 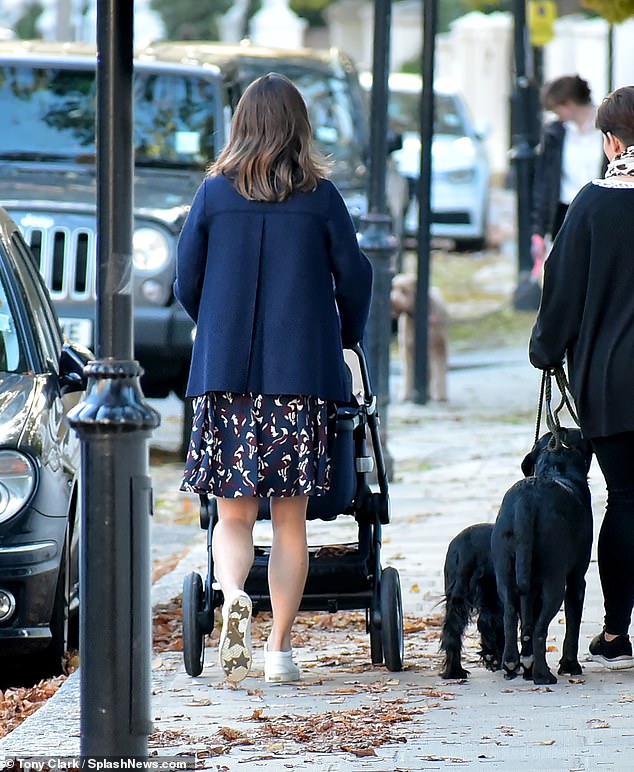 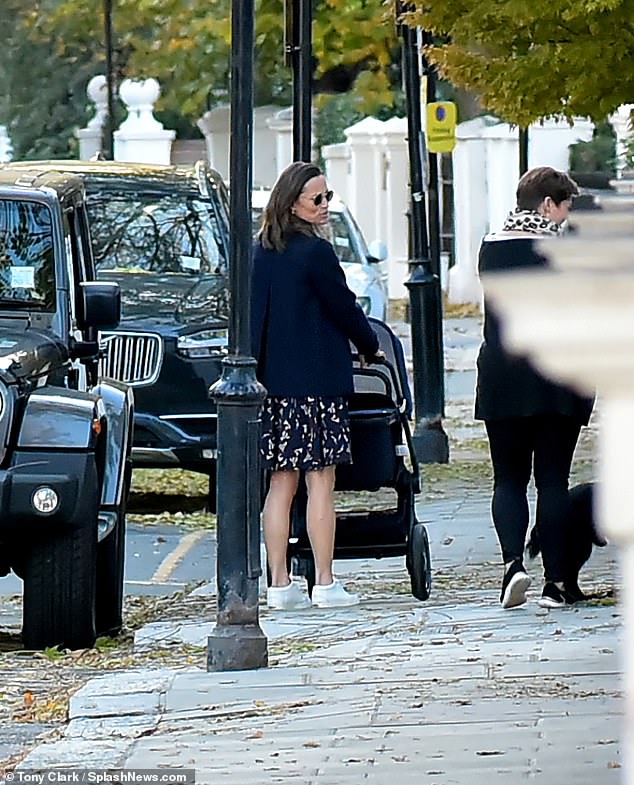 Pippa, who has not yet announced the name of her son, had her hands full pushing her pram through Chelsea