New movie is an irresistible story, made better by Tom Hanks’ mastery

Tom Hanks rides the wild plains of Texas in this satisfying, if over-burdened, revisionist western. The novel is by Texas-based novelist Paulette Jiles, who specialises in stories in and around the US Civil War. The adaptation is by Luke Davies (Australian) and the director is Paul Greengrass (British), both a long way from home.

That might explain a certain tendency towards speechifying in an otherwise understated script. The film is partly a homage to John Ford – including a specific shot through a doorway that is meant to directly invoke his style – but Ford would have put the red pencil through some of this “meaningful” dialogue well before they got to shooting, or shootin’. Greengrass has done some fine and influential films (Bloody Sunday, United 93, three Bourne movies and Captain Phillips, where he worked with Hanks), but he has a polemicist’s desire to send clear political messages. These can overwhelm a lesson he surely knows well: better to show than tell.

That said, the film wraps around you like a pair of worn leather gloves. We are in safe hands. Hanks has that power to ground a film – to stand solid and unmoving in the landscape and induce us to relax. He almost never picks a bad script; those that might go close, he improves with the gravity of virtue. He is the closest thing Hollywood has to the everlasting good man. Even Jimmy Stewart sometimes played the villain, but Hanks rarely goes there. He shares a tendency towards reform.

Here, he is Captain Jefferson Kyle Kidd, an ageing soldier in search of peace. Five years after that war between the states, he roams the rough roads of Texas with two horses and a bunch of newspapers, which he reads to largely illiterate audiences by lamp light. He crafts the show with stories that entertain and inform, an early form of the comforting modern newsreader – a ruddy-faced Confederate veteran with bullet holes to prove it, but no desire to refight the war. When “federal news” elicits a groan from the Texans, who rail at northern demands and the presence of their soldiers in the back, he calms the waters. Greengrass tells us little about his past, but Hanks tells us a lot, without words.

The film is about what happens when Kidd finds a blonde 10-year-old girl in the wilderness south of Wichita Falls. She is dressed as a Kiowa and speaks no English. The black man who was taking her to her kin, six years after she was abducted, has met a foul end. Kidd tries to offload her at the next town, but his heart won’t allow it. 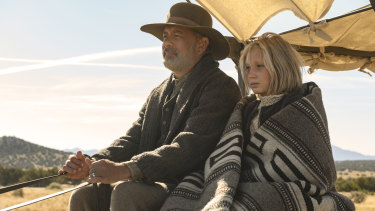 Tom Hanks and Helena Zengel in a scene from News of the World.Credit:AP

Anyone who knows westerns will recognise the plot: it’s a reversal of The Searchers, a classic western from 1956 in which John Wayne, as a Civil War veteran, spends years looking for a niece (Natalie Wood) abducted by Comanches. When he finds her, he thinks to kill her because she’s now “too Indian”. Captain Kidd is a different kind of man – one who has spent five years repenting the things he did in the war. This girl Johanna (Helena Zengel) is his way back, though he doesn’t yet know it. The Searchers is a journey into the dark; Hanks and the girl are coming the other way.

It’s an irresistible story, with plenty of research behind it. The portrait of the chaos of the south after the war is potent. Some of the people are hungry and dangerous; others are grief-stricken and hollow-eyed. Kidd and Johanna weave their way south as if passing through the seven circles of hell. Who else would you want to make such a journey with but Hanks? He has such mastery of his craft, such instincts for a character’s nuance and depth. He’s also generous, working superbly with his young co-star, who has to convince us of her own trauma.

The landscape is epic, as you would hope, but it’s not actually Texas. New Mexico stands in, probably because it’s prettier than most of Texas. Greengrass makes full use of it, as he’s seeding the film with contemporary undertones. You can’t miss these, although the film might have been more timeless without them.

News of the World is in theatres from January 28, then on Netflix from February 10.