Gay couple who adopted abandoned newborn that they found on NYC subway platform 20 years reveal their son is now thriving at college and towers above them!

A gay couple who adopted a newborn baby after finding him abandoned in a New York City subway station is about to celebrate their son’s 21st birthday this year — and now one of them has written a children’s book about the unique way they became a family.

In August of 2000, Danny Stewart, then 34, was on his way to meet his partner, Pete Mercurio, then 32, for dinner when he noticed an odd bundle tucked up against a wall in the 14th Street subway station in Manhattan’s Chelsea neighborhood.

Shocked and concerned to find a newborn inside — with some of his umbilical cord still attached — Danny rushed to call the police, having no idea that the baby would soon be his son, and that the very judge who would grant him custody would officiate his wedding to Pete over a decade later. 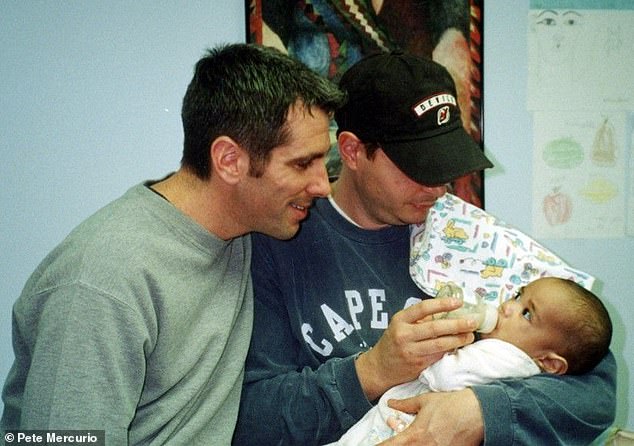 Happy family! A gay couple who adopted a newborn baby after finding him abandoned in a New York City subway station is about to celebrate their son’s 21st birthday this year 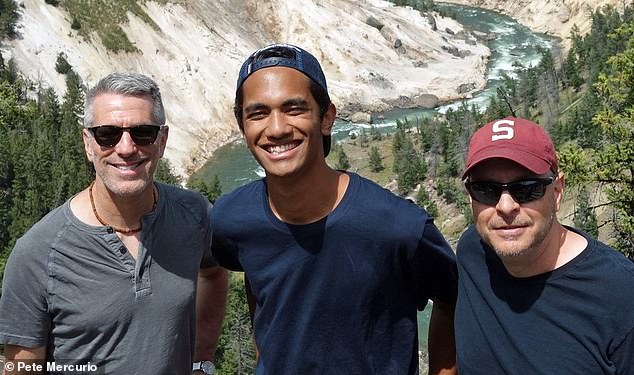 All grown up! Kevin is now a 20-year-old college student studying math and computer science 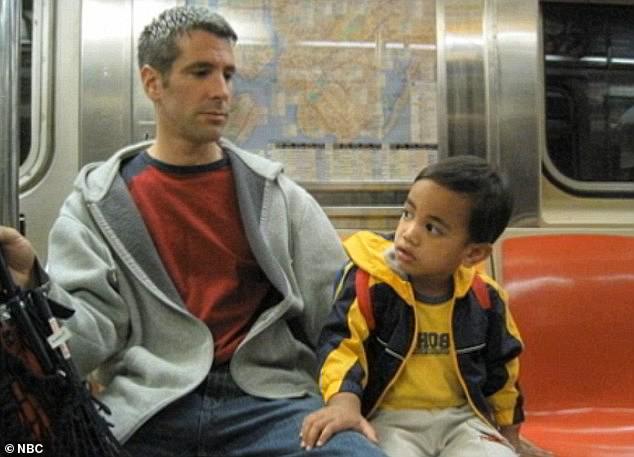 How it started: In August of 2000, Danny Stewart, then 34, discovered a newborn baby abandoned in a Manhattan subway station and called 911

Danny, now 55, Pete, now 52, and their son Kevin’s story first made headlines back in 2000, and the family has continued to pop up in the press over the past two decades.

Most recently, Pete, a playwright and web designer, published an illustrated children’s book, Our Subway Baby, which tells the story of their family and how it came to be. 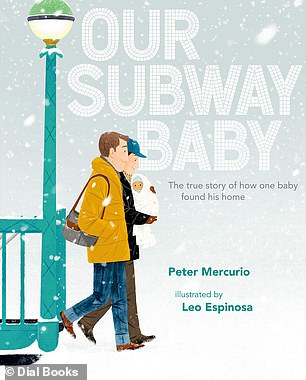 Story time: Last year, Pete, now 52, published a children’s book called Our Subway Baby about how he and Danny, 55, came to be Kevin’s parents

On August 28, 2000, Danny, a social worker, was running to meet Pete, his boyfriend of three years, when he paused on the southbound platform of the A, C, and E trains at 14th street at about 8:30 p.m.

‘I glanced down and saw what I thought was just a baby doll,’ Danny told Channel 11 News at the time. ‘His upper body and his head were wrapped in a dark sweatshirt. But as I started to go up the stairs, he started to move, so I knew he was alive.’

He immediately rushed back down, which is when he saw that the newborn was naked with the umbilical cord still partially intact.

Speaking to the BBC, Danny said that the whole situation ‘seemed really unreal,’ but he tried to get the attention of passersby for help. When no one would stop, he ran outside to use the payphone to call the police.

He also called Pete, who got there as the police took the baby to the hospital.

‘It’s not the end,’ Peter told Danny at the time, according to Parents. ‘A child can’t just fall into your life this way and disappear.

‘Yeah,’ Danny agreed. ‘We’ll probably think of him for the rest of our lives. We should keep track of him so we can send him a birthday card every year.’

Danny did try to keep track, and went to see the the baby at the hospital the next day — but was told that only family was allowed. A pediatrician told him that the baby — who had been nicknamed Baby Ace because he’d been found near the A, C, and E trains — would be placed in foster care.

But that wouldn’t be for long. Danny was soon contacted by the Administration for Children’s Services, which asked him to be present at a family court hearing for the baby in December 2000.

At the hearing, Danny was in for a surprise for the judge.

‘She says, “Mr. Stewart, I want to let you know what’s happening here, in instances where we have a baby that has been abandoned, we want to place them in pre-adoptive foster care as quickly as possible,”‘ he recalled to BBC.

‘In my head, I’m thinking, “Well that makes sense.” And then the next thing out of her mouth was, “Would you be interested in adopting this baby?”‘

Danny was shocked, and admits that he hadn’t been thinking of adopting at that time.

‘But at the same time, I could not stop thinking that… I did feel connected, I felt like this was not even an opportunity, it was a gift, and how can you say no to this gift,’ he said. 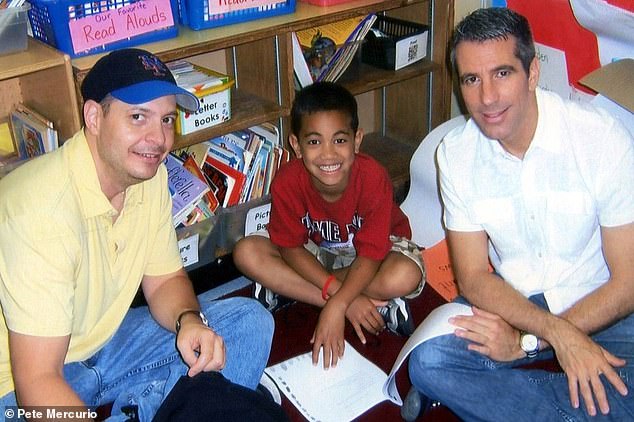 Getting ready: The couple scrambled to prepare, enlisting Pete’s family to help put together a nursery in record time 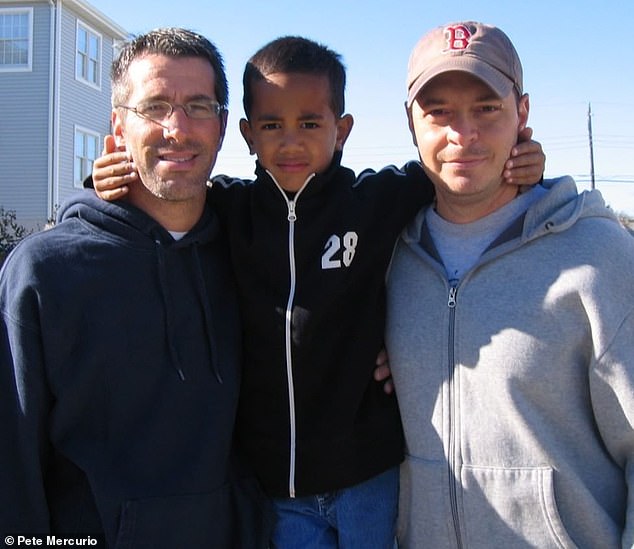 Official! The adoption was officially completed a year later on December 17, 2002

Though adoption was usually a lengthier, more complicated process, the judge explained that she was authorized to expedite things when babies were abandoned.

Danny agreed — and then left the courtroom to call Pete and tell him what he’d said yes to.

Pete said no at first, urging Danny to tell the judge he’d changed his mind. The couple spent the next week arguing over the decision, with Pete pointing out that they couldn’t afford a baby at the moment — and they still lived with a roommate.

In fact, they almost broke up over it, with Danny insisting he was adopting the baby whether Pete wanted to be a part of it or not.

But Pete agreed to come along for a foster home visit a week after the hearing — and as soon as Pete held the baby, he felt an ‘instant wave of warmth.’

‘The baby squeezed my finger with his entire hand so hard,’ Pete said. ‘He was just staring up at me and I was just looking at him, and it was almost like he found a pressure point in my finger that just opened up my heart to my head and showed me in that moment that I could be one of his parents, one of his dads.’

The couple decided to name the boy Kevin, and were prepared to spend several months on the adoption process, which would include home visits and background checks.

But at a hearing later that same month, the judge — the same one from the earlier hearing — offered to let them take Kevin home just two days later, in time for Christmas. 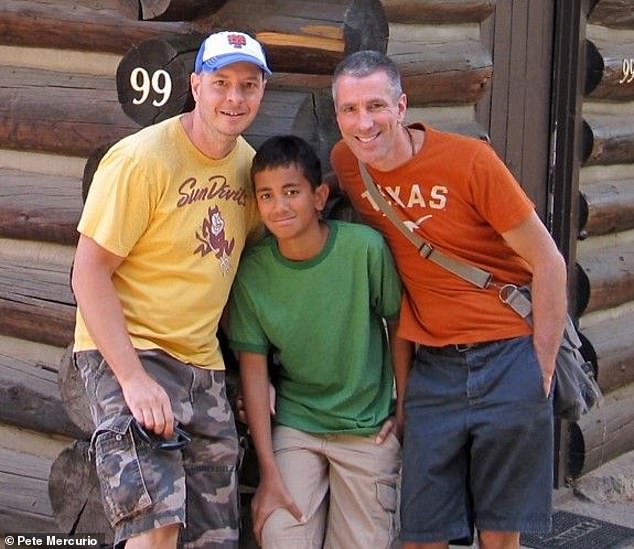 ‘The first thing everyone wants to know is what he calls us,’ Danny said. ‘It’s an easy answer: I’m Daddy and Peter is Papi. We figured “D” for Danny, “P” for Peter’ 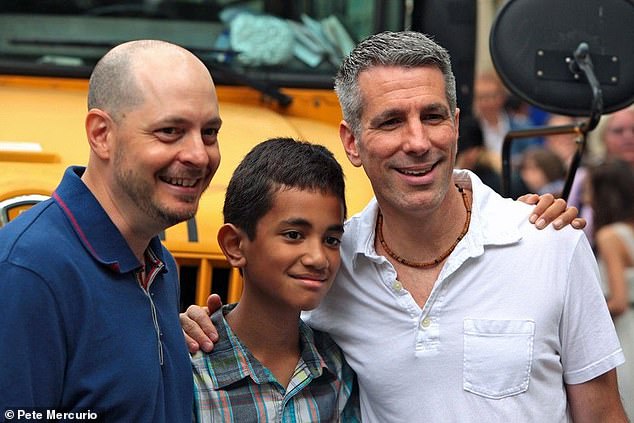 Updates: The family has popped up in stories several times over the years 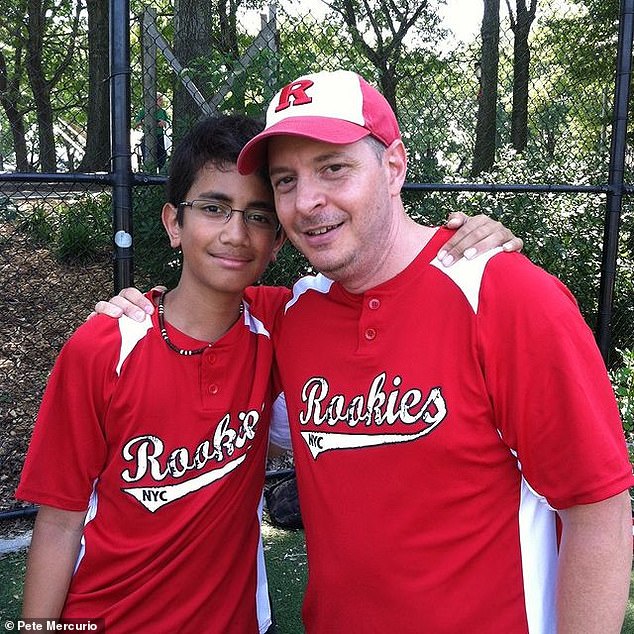 Origins: As Kevin got older, they created an illustrated book for him about his unique story, which Kevin loved and brought to school for show and tell

The couple scrambled to prepare, enlisting Pete’s family to help put together a nursery in record time. Days later, they spent a ‘magical’ Christmas at home, ‘marveling’ at their sweet reality.

Kevin was supposed to go back to his foster home after Christmas while other aspects of the adoption were finalized, but Pete and Danny couldn’t bare to let him go — and luckily, they were able to get approval to keep him as foster parents.

The adoption was officially completed a year later on December 17, 2002.

At the final hearing, Pete asked the judge why she’d asked Danny whether he was interested at adopting at that first hearing back in 2000.

Recalling the moment in the New York Times, Pete wrote: ‘”I had a hunch,” she just said. “Was I wrong?” And with that she rose from her chair, congratulated us, and exited the courtroom.’

‘The first thing everyone wants to know is what he calls us,’ Danny told Parade. ‘It’s an easy answer: I’m Daddy and Peter is Papi. We figured “D” for Danny, “P” for Peter.’

As Kevin got older, they created an illustrated book for him about his unique story, which Kevin loved and brought to school for show and tell.

Then, in 2011, New York legalized same-sex marriage, becoming the sixth US state to do so. 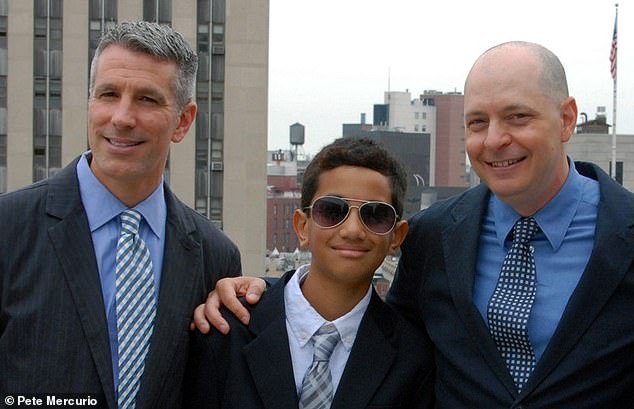 They do! In 2011, after New York legalized same-sex marriage, the pair tied the knot — with the same judge from Kevin’s case officiating 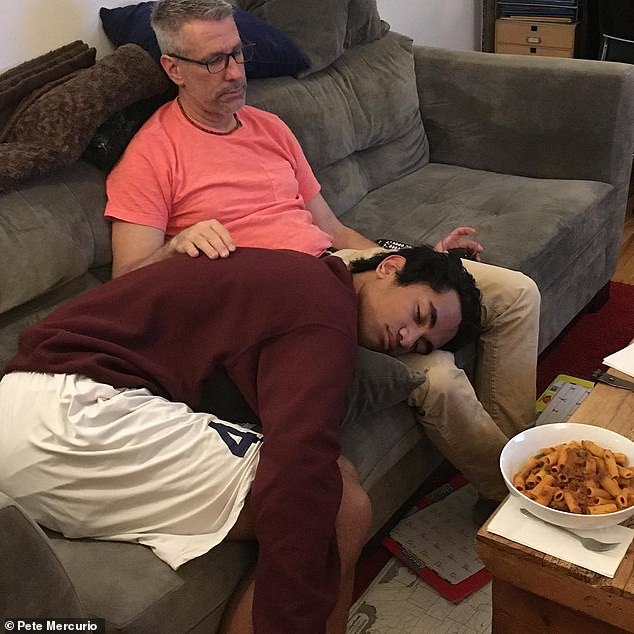 Though Danny and Pete already felt like they were as good as married, they decided to make it official — and Kevin had an idea about who should do the honors.

‘Why don’t you ask the judge who performed my adoption to marry you and Dad?’ Kevin asked.

So Pete wrote a letter to the Manhattan family court, asking whether the judge remembered them‚ and whether she’d be willing to officiate their wedding.

‘Within hours, a court attorney called to say that, of course, the judge remembered us, and was thrilled by the idea of officiating our marriage. All we had to do was pick a date and time,’ Pete said.

At their wedding ceremony, Kevin was nervous to meet the judge, knowing her only as a character in the storybook his dads had made — but the two reunited with a hug.

‘When we finally remembered the purpose of the visit, and Danny and I moved into position to exchange vows, I reflected on the improbable circumstances that delivered all of us to this moment,’ Pete wrote.

‘We weren’t supposed to be there, two men, with a son we had never dreamed of by our side, getting married by a woman who changed and enriched our lives more than she would ever know. But there we were, thanks to a fateful discovery and a judicious hunch.’ 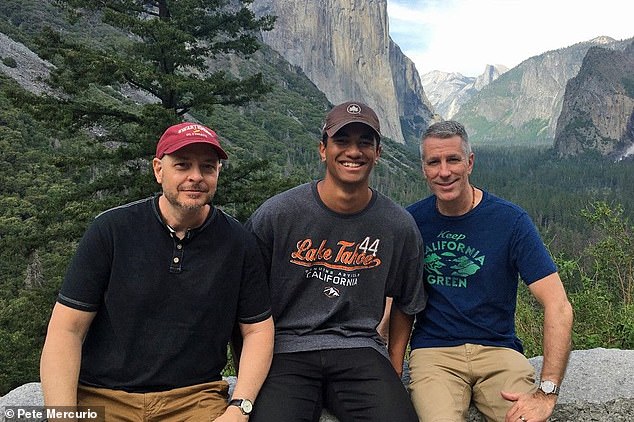 So big! Photos show Kevin, now 20, towering over his dads at over six feet tall 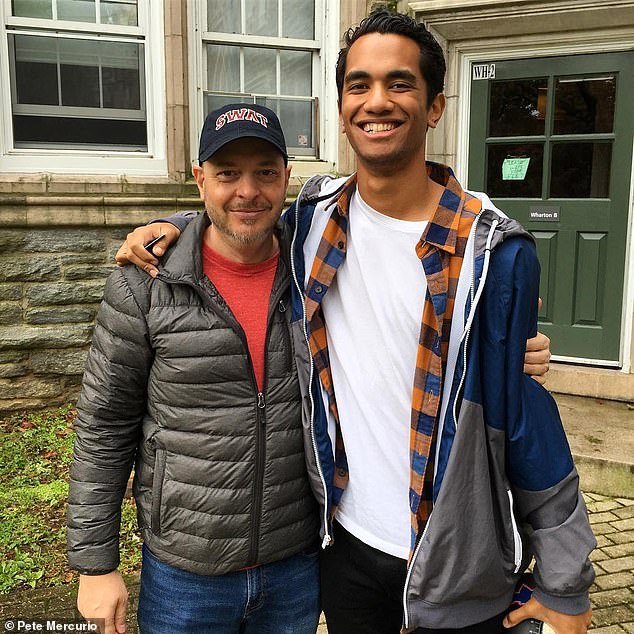 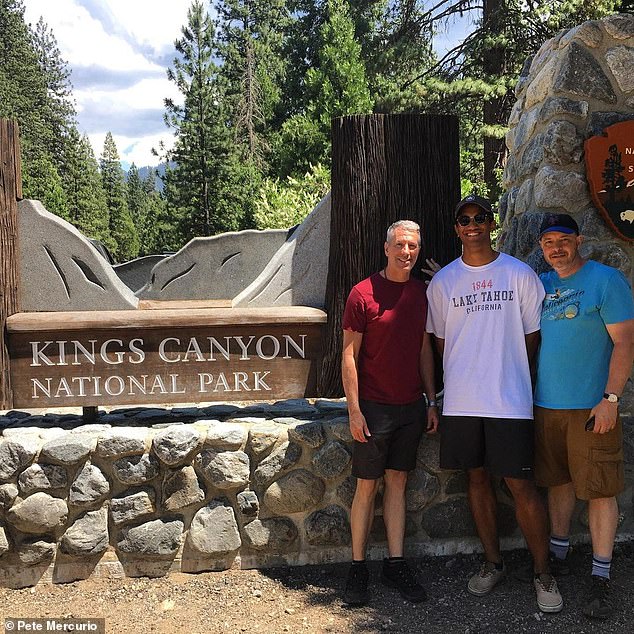 Bonding: The family likes to go to national parks together and do outdoor activities

At the reunion, the judge also further explained why she’d asked Danny about adopting all those years ago. She said that babies need a ‘connection’ to someone, and at that moment, Kevin’s most serious connection was to Danny — and she just had a good feeling about it.

Now, two decades later, Kevin is a 20-year-old college student studying math and computer science. In addition to pursuing a STEM degree, he can also play piano and guitar, has run marathons, and spent several years dancing with the National Dance Institute.

Photos show him towering over his dads at over six feet tall.

Pete describes him as respectful, empathetic, kind, and funny, and says they the three of them like to visit national parks and watch the New York Mets play.

‘I can’t imagine my life if it didn’t turn out this way,’ said Danny. ‘My life has become much more enriched and full. It has changed my world view, my perspective, my whole lens. I did not know that this level of deep love existed in the world until my son came into my life.’

It made the ALA Rainbow Book List for Young Readers and was named a Lambda Literary Award Finalist.