NHS Heroes: Fighting to Save Our Lives viewers left 'heartbroken'

People from across the nation were left ‘heartbroken’ after a ‘powerful’ and ‘eye opening’ documentary offered an honest insight into the realities faced by NHS staff working on the frontline.

In last night’s one-off Channel 4 documentary NHS Heroes: Fighting to Save Our Lives, intensive care nurse Luke Sumner, who works in a hospital in Blackpool, could be seen getting emotional as he recalled having to make the difficult choice about whose hand to hold as two patients were dying from coronavirus.

‘Just a couple of days ago I was torn between two patients and didn’t know which one to sit with as they passed away,’ he explained. ‘One gentleman had family he was in contact with. We managed to connect his daughter up to an iPad, so she could be with him, as such, when he passed away.’

And those who tuned in there left in tears following the unthinkable decision he was forced to make.

‘Have just cried for the last hour watching #NHSheroes on Utterly heartbreaking, but a must watch. So powerful. And if anyone STILL needs a reason to #StayAtHome … let it be to help these brilliant, selfless humans – so they can help us.’ 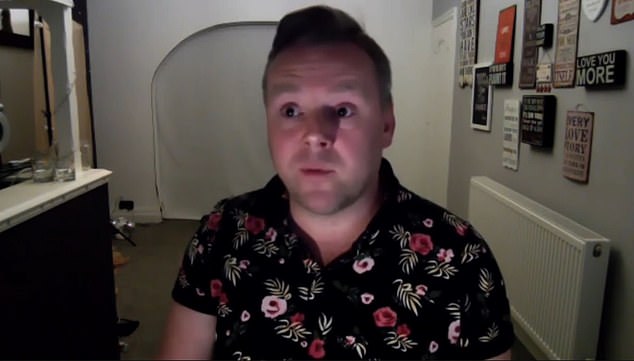 Luke Sumner (pictured), who works in a hospital in Blackpool, got emotional as he recalled having to make the difficult choice about whose hand to hold as two patients were dying from coronavirus. He appeared in last night’s one-off Channel 4 documentary NHS Heroes: Fighting to Save Our Lives 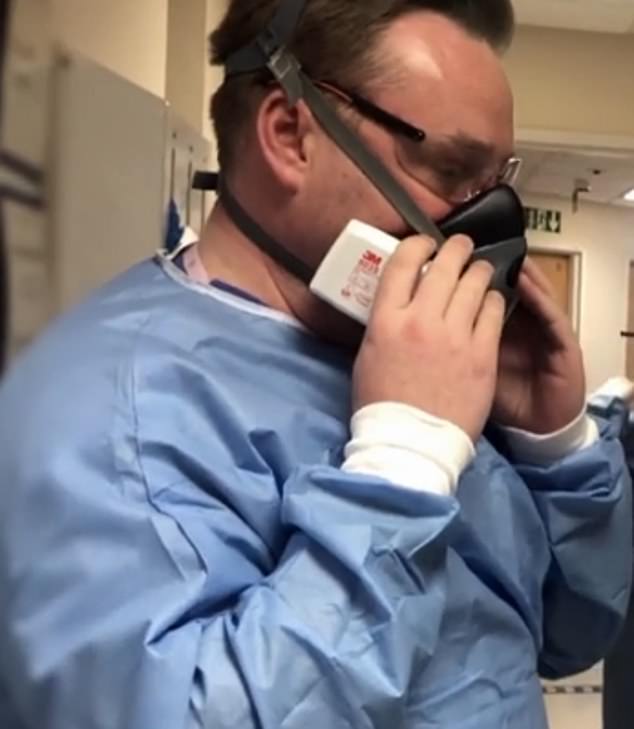 The episode showed the team leader (pictured in PPE), who is in charge of the work and well-being of 20 nurses, trying to keep spirits up in the hospital 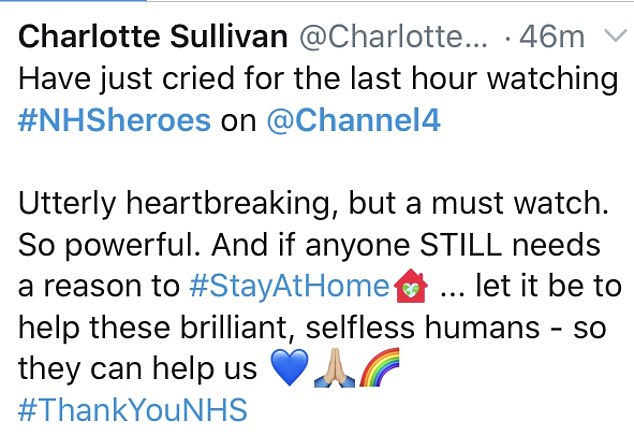 A second commented: ‘I urge you all to take an hour out of your day and watch #NHSheroes it’s a powerful, emotional and essential watch,’ while a third added:

‘Thank you for such a moving programme #NHSheroes was brave and real and it showed what it is really like for our Doctors and Nurses on the front line and how it is affecting them.’

Luke went on to explain the moment where he found himself inbetween curtains, sat at one gentleman’s bed with no relatives whatsoever holding his hand.

‘I decided to tell him how peaceful everything has become,’ he said. ‘I just said there are no cars on the road. I was telling him how much nicer the world is now.’

‘Through the curtains all I can hear is this gentleman’s daughter saying: “It’s alright dad, you’re going to be up in heaven with mum again soon. She’s there waiting for you.”

‘I pretty much filled my goggles with tears. I actually broke down because it dawned on me how many lives we’re going to lose from this.’ 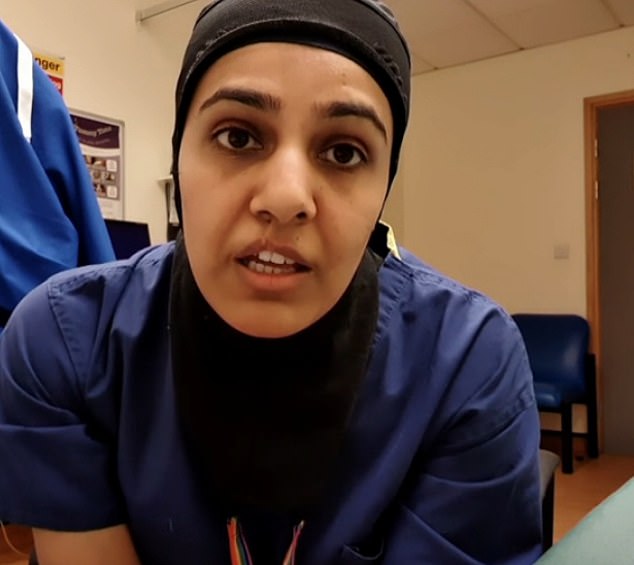 Kiran Rahim (pictured), who works in a hospital in East London, spoke of the devastating moment she lost a colleague who she had been treating in ICU 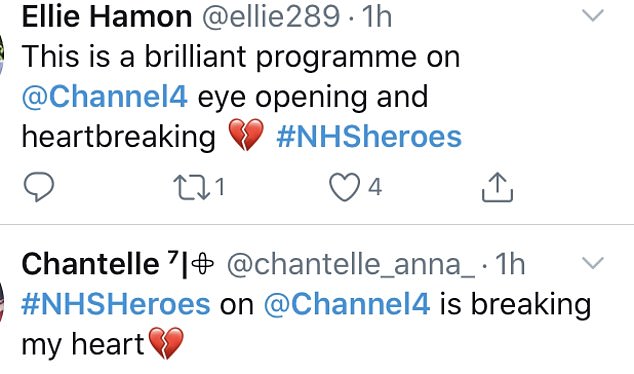 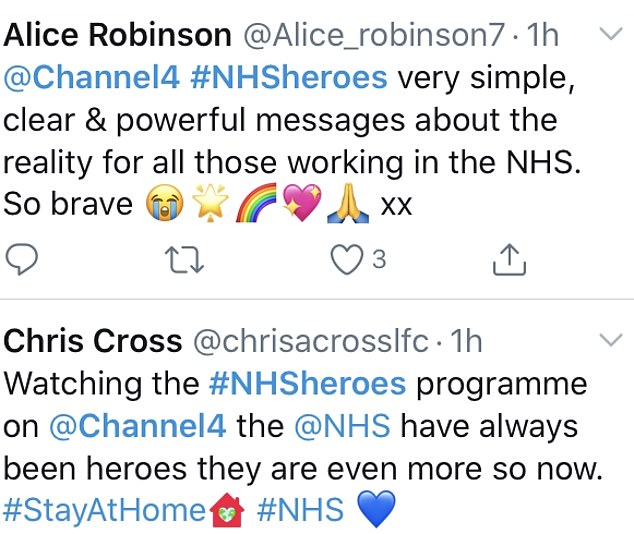 In another particularly hard-hitting moment, pediatrician Kiran Rahim, who works in a hospital in East London, spoke of the devastating moment she lost a colleague who she had been treating in ICU.

‘This is in memory of all the staff members we’ve lost here in the hospital I’m working at. Two of them were quite big people I’d worked with – one was a gentleman I cared for. It was really sad. The hospital have very kindly done memory books for all of the staff members.’

And viewers took to Twitter to share their gratitude and thanks to those working tirelessly on the frontline to save lives. 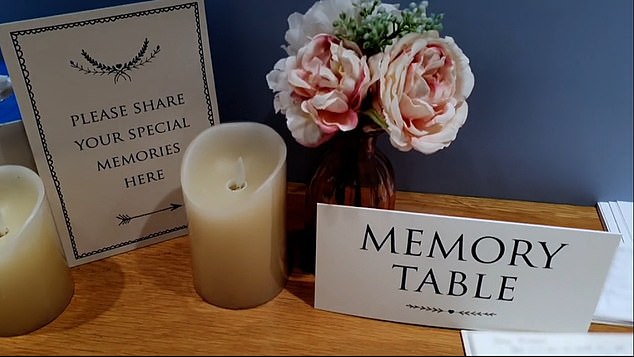 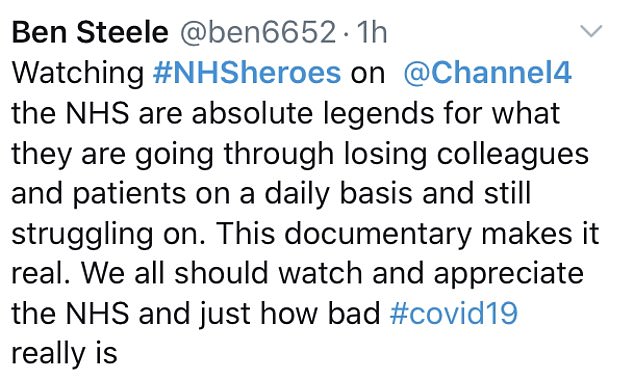 One person who tuned in commented: ‘This is about as real as it gets. Thank you’ (pictured)

‘The NHS is just that…people, heart, commitment…..God Bless Kiran and all the others on our front line..every single man & woman…..thank you from the bottom of my heart,’ wrote one.

A second commented: #NHSheroes was a tough watch but I couldn’t take my eyes off it. Brilliantly put together by @Channel4. Thank you to all of our @NHS heroes for what you continue to do,’ while a third added:

‘Watching #nhsheroes on channel 4, absolutely heartbreaking. I cannot even bare to hear what these people have all been going through, I truly salute every single one of you for your compassion and your honesty. Thank you.’

NHS HEROES: FIGHTING TO SAVE OUR LIVES – Wednesday 6th May, 9pm on Channel 4