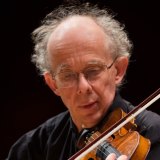 The Melbourne Chamber Orchestra has long been one of the city's most valuable musical assets, constantly performing at a high standard programs that are both imaginative and accessible. Under founder and artistic director William Hennessy, it just seems to be getting better.

Mozart the King is a delightful program of a Cimarosa overture, a Mozart piano concerto, a Beethoven violin romance and a late Haydn symphony, 98. With a small string orchestra of 14, plus winds, conductor Michael Dahlenburg drew rich sonorities and the orchestra’s trademark intimacy, aided by a lovely sense of line.

The Mozart concerto was the relatively rare No. 22, K482, and it received a sumptuous performance from the fine Melbourne pianist Stefan Cassomenos that got better with each movement. If at first I felt his touch lacked dynamic subtlety, by the end he and orchestra were in perfect accord with many fine flourishes. He joined a long list of soloists who have written their own cadenzas, and his were both adventurous and masterful in style.

In the stately Beethoven romance, young violinist Natalia Harvey played with elegance and purity, though she was a little restrained.

Hennessy likes to talk (occasionally too long) but his extended historical lecture with musical demonstrations before the Haydn symphony was delightful and enriching. He has named it "the King", honouring Haydn’s homage to Mozart. Apparently, Hennessy plans to name all the unnamed Haydn symphonies, which at six concerts a year should take him nearly a decade and a half.

In perhaps the most modest encore in Melbourne’s musical history, Cassomenos came back to the Steinway for a few bars of lovely obbligato at the end of the last movement.