Omarosa is a creation in Trump’s own image

TOM LEONARD: Omarosa is a creation in Trump’s own image and he only advanced the bullying, conniving and shockingly devious former reality show contestant because he saw so much of himself in her, insiders claim

She’s called him an idiot, a con and an inveterate liar. He’s called her a ‘crazed, crying lowlife’, ‘wacky and deranged’ and a ‘dog’.

Hardly the most presidential language, but particularly ill-advised given she’s black and accuses him of liberally using the N-word.

The spectacularly vitriolic feud between Donald Trump and his former senior adviser (and now aspiring nemesis) Omarosa Manigault Newman has shocked a Washington that thought it had seen it all when it came to Trumpian melodrama.

The U.S. President is not known for his charity towards opponents, but he’s plumbed new depths in his vocabulary to describe the treachery of a woman who was, until a few months ago, one of his closest aides. 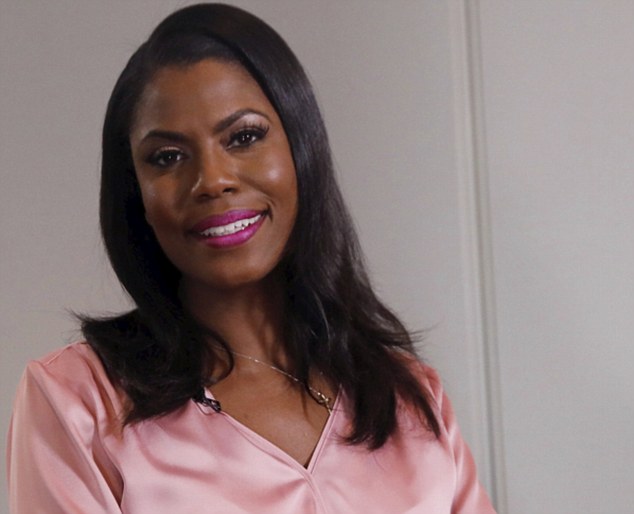 He has reportedly told advisors he wants her arrested and is suing her for ‘millions’ for breaching a confidentiality agreement.

You can see why he’s livid at this betrayal, say insiders. It’s not just that she accuses him in a new book, Unhinged, of being in ‘mental decline’ and ‘physically ill’, of being unable to read properly and of being quietly undermined by his wife, Melania, who is apparently waging a guerilla war on him through her wardrobe choices.

It’s because, they insist, Trump advanced the only African-American in his inner circle because he saw so much of himself in her.

A bullying, conniving and shockingly devious former contestant on his reality show, The Apprentice, she managed to convert TV celebrity into political power with a canny eye on her own self-advancement.

Does this sound familiar? Newman, 44, isn’t just a Trump appointee, say insiders, but a creation in his own image.

Just eight months ago, she was reportedly dragged kicking and screaming — literally — from her White House office, on the orders of exasperated bosses. They accused her darkly of ‘significant integrity issues’, but were also alarmed by her unchecked influence on the President. 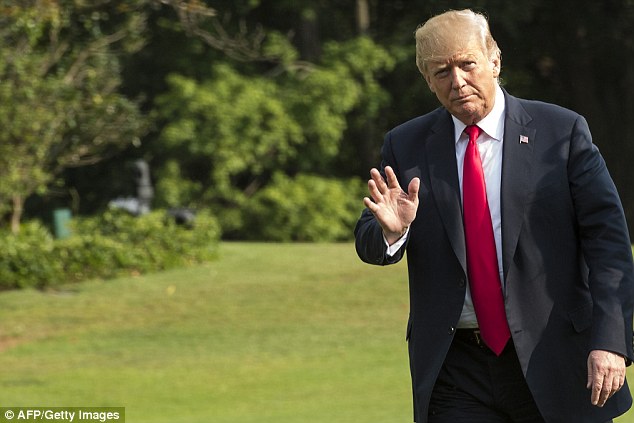 She vowed revenge on her former mentor with a tell-all book and, with its publication this month, she has proved as good as her word.

Like Dr Frankenstein and his monster, both feeling cruelly spurned, the pair are slugging it out to determine who can inflict the greatest damage on the other.

There were claims at the weekend that Newman has a ‘treasure trove’ of secretly recorded videos, emails and text messages concerning the President and his staff to support incendiary claims in her book.

She has already proved that she has taped private conversations with Trump stalwarts, including his daughter-in-law Lara Trump and chief of staff John Kelly.

Her chat with the latter took place in the White House Situation Room, supposedly the most secure location in the U.S. government.

‘There are things I’m going to save to share when the time is right,’ she says.

While Trump’s spokesman has dismissed her book as ‘riddled with lies and false accusations’, aides urged the President not to respond himself. But he couldn’t stop himself, ranting on social media and interrupting key government meetings to berate her. 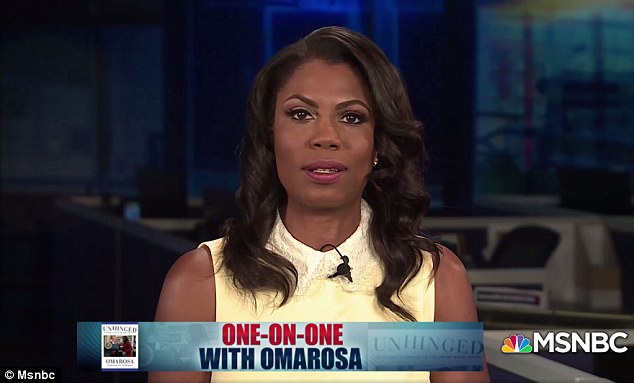 How did the supposedly wily President not see this horror show coming — that someone who behaved as the most unscrupulous villain on his TV show might just prove the same in the bigger reality show of the Trump administration? Well, too late now.

She made enemies of her fellow contestants at just about every turn and had a talent for getting under people’s skin, manipulating them into looking like the bullies.

She claimed to from suffer migraine headaches, but they only seemed to appear when work needed to be done.

Whenever the others branded her a ‘bitch’, which was not uncommon, she seemed unfazed.

‘I’ve been successful again and again and it works for me,’ she told one accuser. ‘I didn’t come here to make friends.’

Her book (she says the title refers to the President) contains reams of embarrassing claims, although often, they’re not supported with detail. She says Trump has a tanning bed in the White House to top up his orange glow.

Far more damagingly, she says she’s heard tapes of him using the N-word about black people in his show ‘multiple times’ while hosting The Apprentice.

She’s also threatened to reveal the names of illegitimate children he has fathered and said she will ‘blow the whistle’ on ‘a lot of corruption’ going on in the White House.

Is she — as one of her long-time TV colleagues claims — simply trying to stretch her ‘15 minutes of fame’, or could she really, as she suggests, bring down the Trump administration?

Some believe his white-hot rage is evidence Trump is desperately worried about what else she may have on tape. Newman certainly had the potential to pick up juicy morsels during a relationship that started 14 years ago. 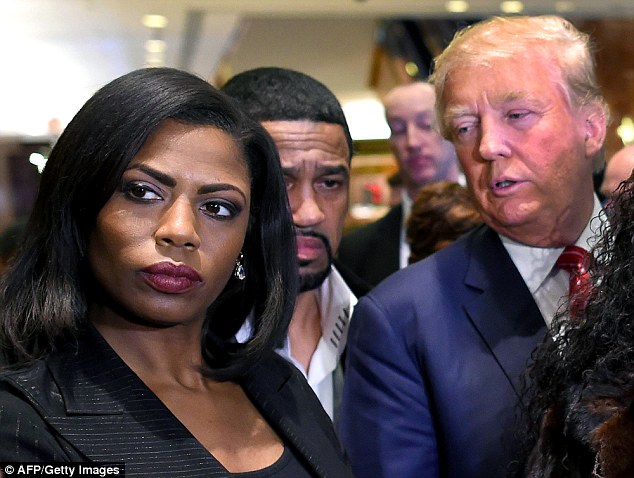 She was raised in a poor family in Ohio who relied on food stamps. Her father was murdered when she was seven and her older brother was shot dead in 2011.

Like Donald Trump, she has had a chequered career, which she has been accused of embroidering. With a degree in broadcast journalism, she got a job aged 24 in the office of Vice-President Al Gore during the Clinton administration.

While she says she was his ‘senior scheduling and advance coordinator’ overseeing all aspects of his schedule, colleagues insist she was ousted from a menial role replying to invitations after just over a year.

She later got a job at the U.S. Commerce Department, where her former boss said she had been ‘unqualified and disruptive’, so ‘I had her removed’.

Her insistence that she was a professor at Howard University in Washington DC was shot down when officials there said she had been no more than a temporary instructor.

What nobody can dispute was that she was a star contestant on The Apprentice in 2004.

Imitating Trump’s hard-nosed approach, she was dubbed ‘the woman America loves to hate’.

She joined up with Trump again in the 2008 Celebrity Apprentice and yet again in 2010 on a dating show The Ultimate Merger, in which 12 men competed for her affections.

She divorced her first husband — Texan Aaron Stallworth — after five years in 2005, later admitting: ‘I wasn’t as supportive of him as I could have been.’

She claims to have found God and was ordained a Baptist minister in 2012. She married John Allen Newman, a fellow clergyman, last year.

By then, of course, she was a senior member of the Trump administration. His campaign recruited her as director of African-American Outreach in the 2016 presidential election.

During the campaign, the woman who now insists he is racist gushed how she was ‘living the American dream because of Donald Trump. Look at . . . the wealth and exposure that I’ve had; it’s very difficult to make the argument that Donald Trump doesn’t like black people and black women’.

After his victory, she was made director of communications, becoming the only black person in the President’s inner circle.

During her April 2017 nuptials with Mr Newman, she caused a stir when she brought members of her 39-strong bridal party to the White House for an extended wedding photoshoot.

Insiders complained her high-handed behaviour was a constant nightmare, as she disrupted meetings with pointless interruptions.

Apparently, her claim to have more access to Mr President than anyone was no idle boast — driving his no-nonsense new chief of staff John Kelly mad.

Insiders said Newman — paid nearly $180,000 (£141,000) a year, top whack for White House staff — loved to barge into the Oval Office, distracting and riling the President with examples of bad press he was receiving.

They also talked regularly on the phone, even in the middle of the night.

When in December, she was fired, sources said she let rip with a stream of profanities and had to be stopped after she tried to walk to the President’s residence.

Why did she work for such a man if he was so flawed, people have inevitably asked her.

She said: ‘In some ways, I was looking for a father figure. And I found that in Donald Trump.’

He once had warm words for her, too, telling an election campaign audience that she was ‘actually a very nice person, but I don’t want to say that because I’ll destroy her image’.

It’s very doubtful he still feels quite so strongly that her harsh reputation is undeserved.