Optical illusion tricks the eye into thinking one circle is smaller

These two centre circles are EXACTLY the same size! Mind-bending optical illusion tricks the eye into thinking one shape is smaller than the other

A baffling optical illusion in which two circles of the same size appear to have different proportions has left internet users scratching their heads.

The well-known puzzle – which has once again appeared widely online – shows two circles each surrounded by circular ‘petals’; one of the circles is surrounded by larger petals, the other by smaller petals.

Most people will see the first circle featured in the Ebbinghaus illusion as smaller than the second one despite both the shapes being exactly the same size.

Even when knowing the circles are the same size, the different sized shapes surrounding them both distracts the human brain causing people to see the illusion, even if they try not to.

The puzzle plays with how our brains gauge an object’s size based on the objects that surround it. 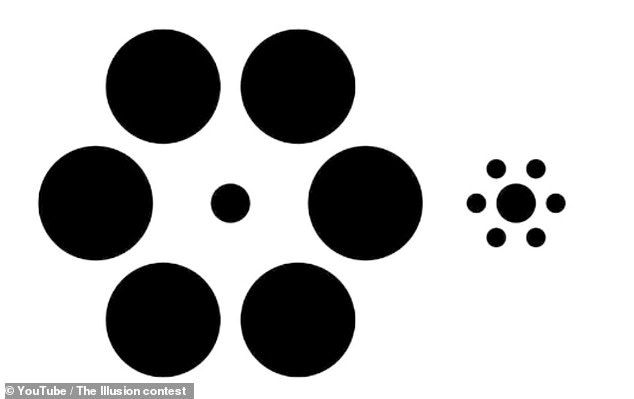 The illusion, which is also known as Titchener circles, was first discovered by German psychologist Hermann Ebbinghaus at the end of the 19th century but was popularised in a textbook about experimental psychology written by Edward B. Tichener in 1901.

Research suggests that the relative size of perception is what makes the illusion work, including the distance of the surrounding circles from the central circle.

The Ebbinghaus illusion has played a role in the debate over the existence of separate pathways in the brain for perception and action.

It has been argued that the Ebbinghaus illusion distorts perception of size, but not action, proven by a study where people had to ‘grasp’ the central circle and the scaling of their grip was unaffected by the perceived size distortion. 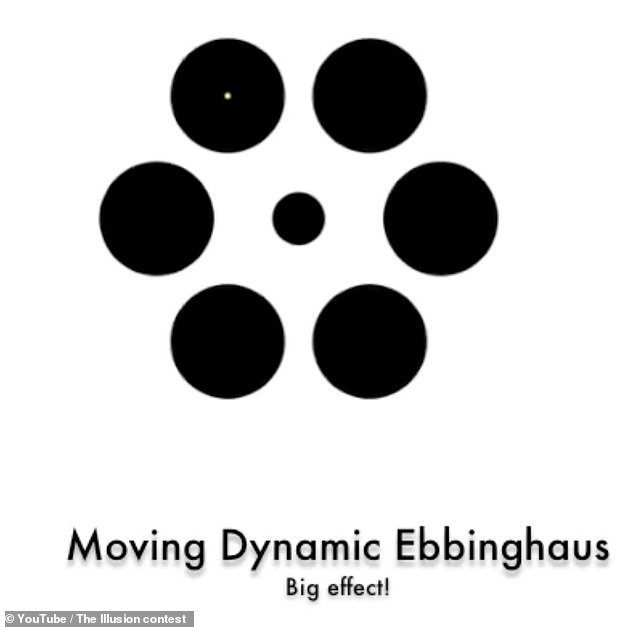 The winner of the Illusion of the Year contest in 2014 was animated take on the Ebbinghaus illusion (pictured), which tried to convince viewers that all the circles are growing and shrinking

A contest in 2014 that celebrated the creativity of the world’s best illusion research revealed its top three visual tricks and how they fool your brain.

The winner of the Illusion of the Year contest was animated take on the Ebbinghaus illusion, which tried to convince viewers that all the circles are growing and shrinking.

A central circle, which stays the same size, appears to change size when it is surrounded by a set of circles that repeatedly expand and shrink.

It was created by Christopher Blair, Gideon Caplovitz, and Ryan Mruczek of the University of Nevada Reno.

A panel of judges picked the top 10 and then attendees of the competitions at St Pete Beach in Florida decided the winners.

The effect of the animated winning illusion is particularly strong if you look away from the central circle or move your eyes – at least twice as effective as the classic, static Ebbinghaus illusion, the researchers said.