An obese woman, who would eat two dinners a night, has had over a stone of excess skin surgically removed after losing almost half her body weight.

Samantha started to go to the gym in 2014 and shed a total of around 9st, but she was still carrying around more than one stone worth of excess skin.

She forked out £3,300 to have the skin on her stomach surgically removed at a private clinic in Poland, and then went back to for a £1,340 ‘arm lift’ procedure, removing a total 1st 5lbs worth of skin. 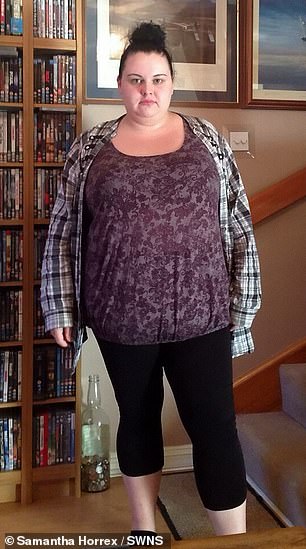 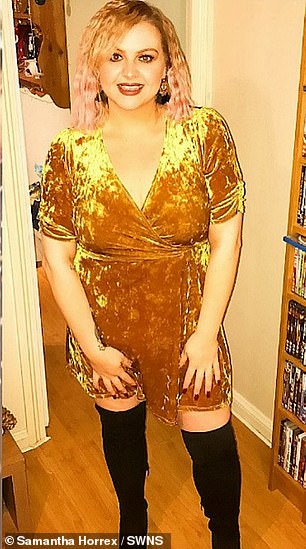 Samantha Horrex, 27, from South Croydon who once tipped the scales at 21st 6lbs -has had over one stone of excess skin surgically removed after losing half her body weight. Pictured: Samantha before (left) and after her weight loss and skin removal

Samantha’s weight rocketed after she got into bad habits which included having double dinners – eating a meal on the way home from work, before tucking into another full-sized plate of food with her family.

She said: ‘I didn’t really think about what I ate, I just had what I wanted, when I wanted it.

‘I would be able to eat huge portions by myself, like a Chinese takeaway for two people.

‘I’ve once even eaten a whole pizza and went on to have another whole pizza, followed by a sharing size bar of chocolate.

‘When I was living at my gran’s, I’d stop off at the takeaway and eat something like a burger on the way home – then have another meal when I was back, it became quite regular.’ 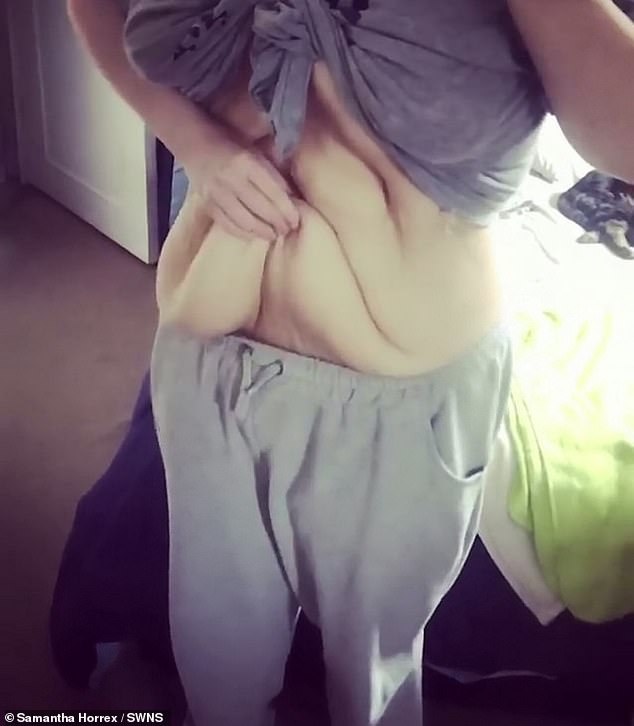 Samantha forked out £3,300 to have the skin on her stomach surgically removed at a private clinic in Poland. Pictured: The excess skin Samantha was left with after slimming down 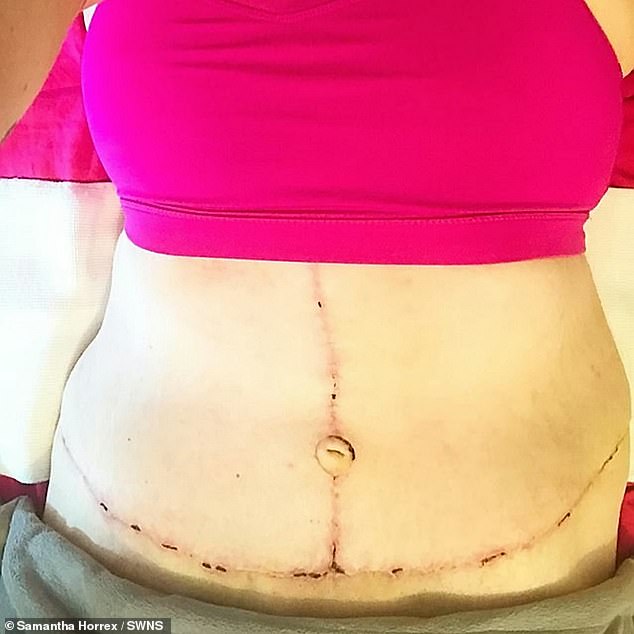 Samantha’s tummy tuck: She lost over a stone of weight from her loose flesh on her stomach being removed

Samantha believes her weight started to spiral out of control when she lost her mum as a teenager and she turned to food for comfort.

She said: ‘I lost my mum at 14, and I definitely ate my feelings, I was eating to fill the void.

‘I would say I was addicted to food, I was quite depressed and turning to all the junk food.’

Samantha went to the doctors several times over the years for various health issues to do with her weight including her periods stopping for over eight months.

She said: ‘I started waking up in the night with pins and needles in my arms and my periods stopped for about eight months when I was 21.

‘My body couldn’t handle my weight, I knew I didn’t wanted to keep going down this path.’

The final straw for the administrative worker, who is currently single, was when she went on trip away with friends in 2014. 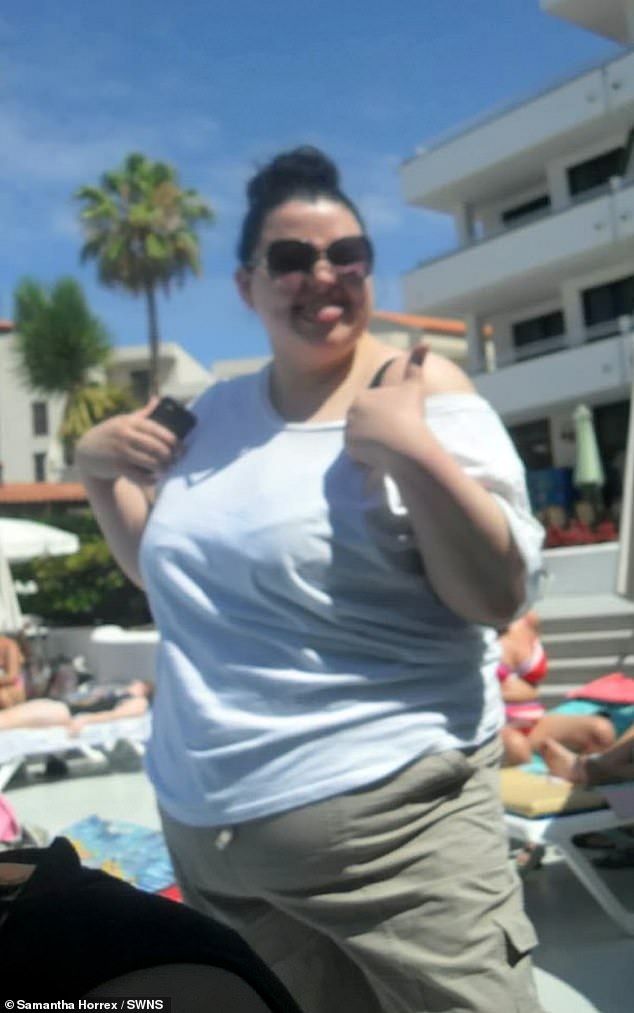 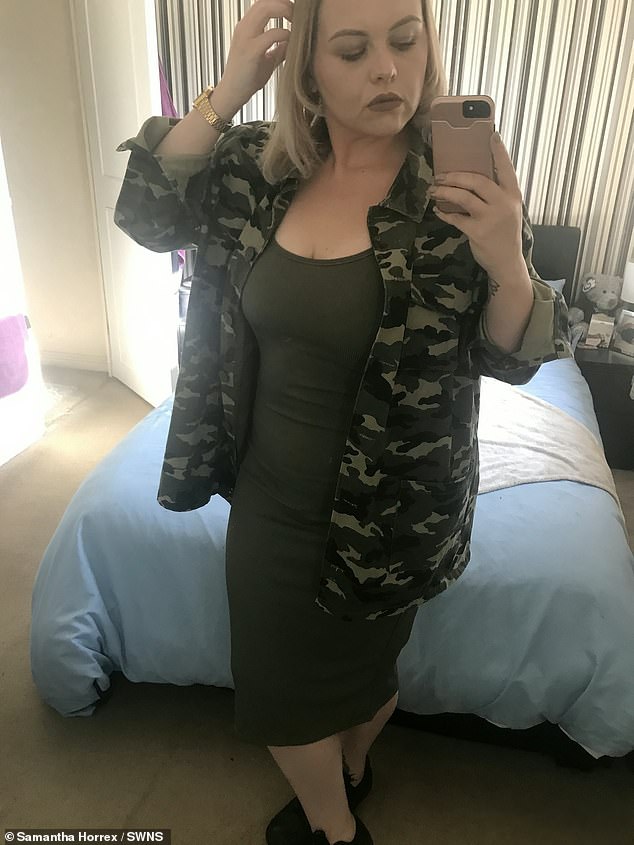 The final straw was when she went on a holiday with friends in 2014 and she had to ask for a belt extension on the flight. Pictured: Samantha following her weight loss 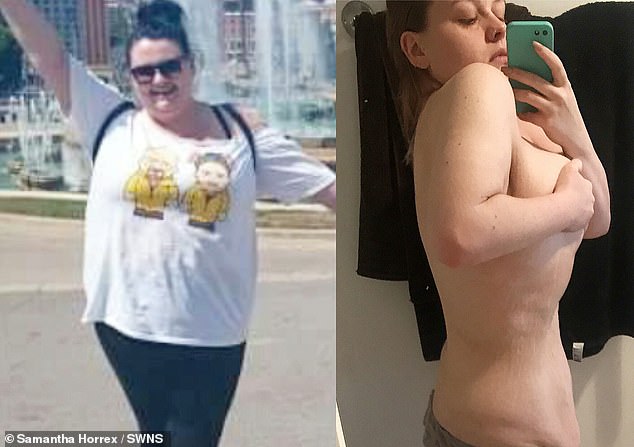 Samantha said: ‘I was going on holiday with my friends to Tenerife and I was struggling with the seat belt on the plane.

‘I had to ask for one of the extension beats and the flight attendant blurted it out in front of everyone. I was mortified.

‘That holiday was definitely a turning point for me. I tried joining Slimming World but after a dropped about three stone, I decided I’d done all I could with them.

‘Instead, I felt like I could go it alone, I focused on sorting out my diet and swapped sugary snacks for fruit and gave up takeaways.

‘I joined the gym and eventually got a personal trainer about two years ago. Now I exercise about three or four times a week and focus on clean eating.’

However, she was still carrying around nearly one stone worth of excess skin – which sagged from her stomach and arms.

She said: ‘I knew with the amount of skin I had the only options were going to be either skin removal surgery or to live with it.

‘The NHS would have been a long wait and nothing would be confirmed for surgery for a good year or so. It would have been such a long process to even be put forward for a consultation to discuss skin removal.

‘So I ended up paying privately. Of course, I was nervous, but I felt excited at the thought of and was very keen to move forward and remove my skin.’

After researching Samantha found a private clinic in Poland and paid for £3,300 for her skin removal surgery in April.

‘They removed about 11 lbs of skin from my stomach and everything went well, no complications, and I’m back to exercising,’ she said. 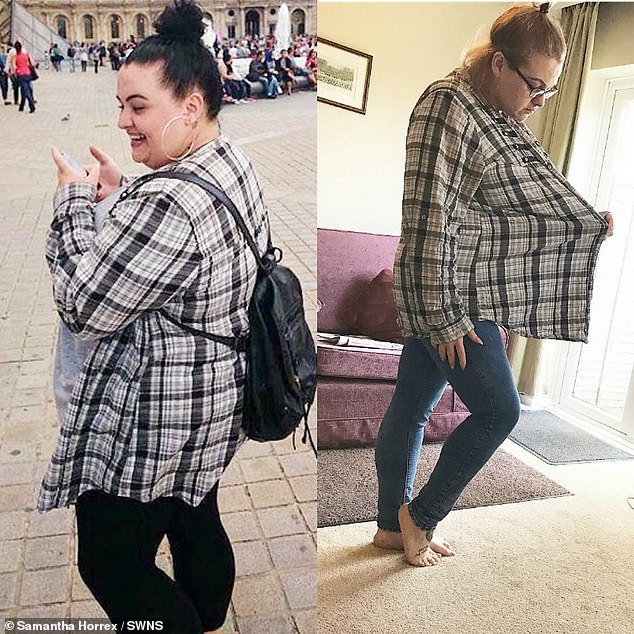 After researching Samantha found a private clinic in Poland and paid for £3,300 for her skin removal surgery in April. Pictured before (left) and after weight loss 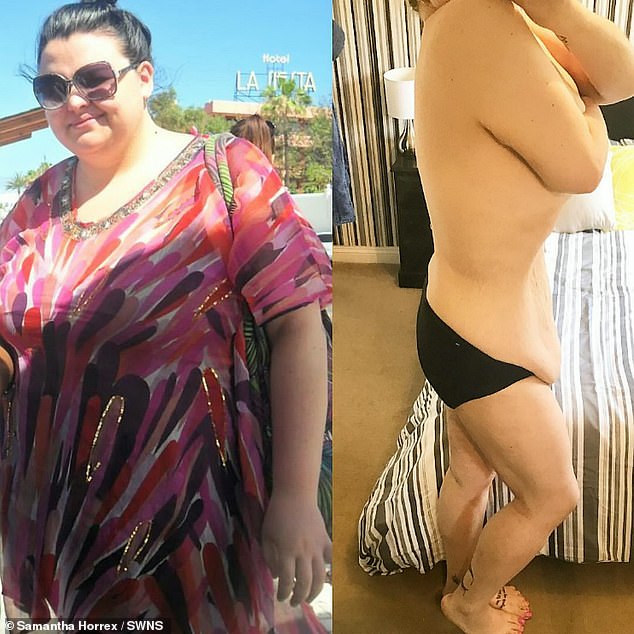 Samantha recently flew back to Poland get more surgery, removing five pounds of skins from her each arm – removing a total 1st 5lbs from her entire body. Pictured: Samantha (left) when she weighed 21st 6lbs and (right) when she had lost the weight and had excess skin

Samantha recently flew back to Poland get more surgery, removing five pounds of skins from her each arm – removing a total 1st 5lbs from her entire body.

Samantha, who now weight 11st 7lbs, said: ‘My tummy ended up looking like a burst balloon after I lost 9st and my arms were really dangly.

‘I worked really hard to lose the weight and felt good for it but the hanging skin definitely took a toll on my confidence.

‘I would never wear a something like a vest top because I was worried about my skin hanging out, so I still dressed in quite baggy clothes.

‘It left me feeling so self-conscious and although I was quite nervous at thought of surgery, the staff were so comforting, and knew it would be worth it in the end.’

Dinner (number two): Another pizza or a Chinese takeaway