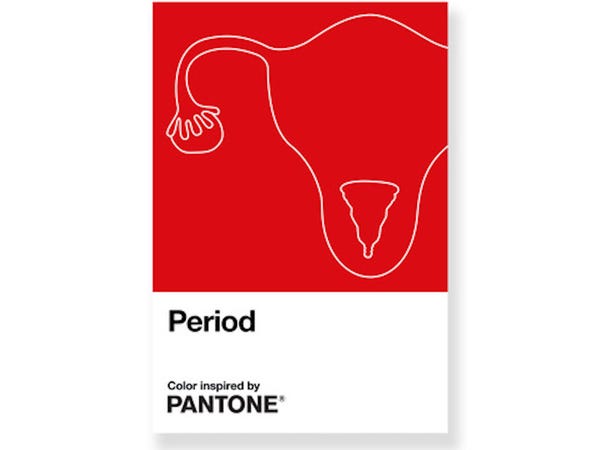 Pantone has launched a new shade of red, it said in order to combat the stigma attached to menstruation.

The new "period" color is a bright scarlet hue and has been created as part of a campaign to encourage people to speak more openly about menstruating.

Pantone, which is the biggest color matching system in the world, has teamed up with Swedish menstruation products brand Intimina to launch the campaign, which is called "Seen + Heard."

The campaign is encouraging people of all genders to talk about periods in a bid to "encourage a more sympathetic and accurate depiction of menstruation in culture."

Danela Žagar, global brand manager at Intimina, explained: "Despite the fact that billions of people experience menstruation, it has historically been treated as something that shouldn't be seen or talked about publicly.

"And if we look at popular culture, depictions of periods have ranged from wildly inaccurate and unsympathetic to being the subject of jokes and derision. Enough is enough, it's 2020.

"Isn't it time periods stop being considered as a private affair or a negative experience? Isn't it time we call out people that try to perpetuate the stigma surrounding periods?"

Laura Pressman, vice-president at the Pantone Color Institute from Pantone, added that the "Period" color is "a confident red shade symbolic of the empowering message" of the campaign.

"An active and adventurous red hue, courageous Period emboldens people who menstruate to feel proud of who they are," she continued.

"To own their period with self-assurance; to stand up and passionately celebrate the exciting and powerful life force they are born with; to urge everyone regardless of gender to feel comfortable to talk spontaneously and openly about this pure and natural bodily function."

The launch of the new Pantone shade comes after Superdrug created a line of sanitary products marketed for "people who menstruate."

It follows a debate around the use of the term, rather than women, highlighted by Harry Potter author JK Rowling who, in June, shared a link to an article titled: "Opinion: Creating a more equal post-COVID-19 world for people who menstruate."

Rowling commented: "'People who menstruate.' I'm sure there used to be a word for those people. Someone help me out. Wumben? Wimpund? Woomud?"

The author's remark was immediately met with a backlash from people calling her "transphobic" and pointing out that it's not just cis-gendered women who menstruate.

Rowling later defended her comments in an essay in which she revealed her experiences of surviving domestic abuse and sexual assault.

Ciara & Husband Russell Wilson Are Funding A Charter School In Seattle Through Their ‘Why Not You’ Foundation
We and our partners use cookies on this site to improve our service, perform analytics, personalize advertising, measure advertising performance, and remember website preferences.Ok