For many in the LGBTI community Paul Mac’s The Rise & Fall of Saint George will trigger bad memories of Australia’s extended and divisive same-sex marriage debate.

The prolific musician and DJ composed his electro-pop oratorio – now worked into a full-scale concert, with a line-up of well-known Australian music stars and a massive community choir – as a response to the destruction of a mural at his home after the country finally voted yes to marriage equality. 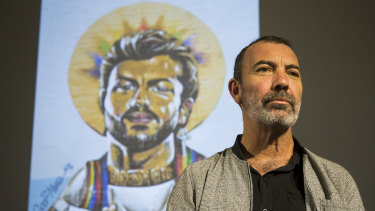 Musician Paul Mac’s show reflects the trauma of having a George Michael mural near his home destroyed .Credit:Paul Jeffers

Commissioned from street artist Scott Marsh, the mural depicted the late WHAM! frontman George Michael as a rainbow-haloed saint, clutching a joint in one hand and a bottle of amyl in the other.

To most it was source of wry amusement, queer solidarity or quiet contemplation. People occasionally turned up and listened to WHAM! on portable Bluetooth speakers under it, and one family, with a baby named George, even took christening photos at the site.

Then a group of militant Christians took offence following the marriage equality plebiscite, arriving repeatedly at night to deface and destroy the mural.

That must have been terrifying, and Mac still appeared shaken as he related the story to a large gathering of the rainbow tribes at Hamer Hall.

And perhaps therein lies the problem with Mac’s musical response, which he concedes he wrote “as therapy”: there’s no reliable path from traumatic experience to accomplished art but distance, reflection and craft, and this event doesn’t demonstrate enough of any of them.

The concert does have smooth beats, soulful vocals from artists such as Joyride and Ngaiire, and moments of musical grandeur. Swelling electronic hymns pastiche religious music with a vocal immensity that outsizes any simple reduction into irony or camp, and the homage to the George Michael favourite Faith provides a rousing resolution.

But if the choir is too big to fail en masse, they need better direction. When they boogie to the music, they look about as dignified as teenagers singing in their bedrooms.

And Lachlan Philpott’s fragmented text, with its staccato choric effects and hideous blend of sentiment and outrage, detracts from the piece. At one point, chorus members take turns yelling out homophobic slurs such as “F—you, faggots!”. Whatever the intention, the bald repetition of such things in public isn’t critique; it may not even be art.

It also risks re-traumatising an audience that knows all too well what homophobia looks like. A similar effect exists in the music, with heavy sampling of alarming audio from confrontations with the mural vandals, or of vile remarks from conservative politicians. (The redoubtable sanity of Penny Wong and Magda Szubanski are in there too, but it doesn’t quite balance out.)

Crucially, the piece doesn’t convey enough humour and resilience, and that makes it less moving and appealing than certain other queer congregations inspired by trauma: the trans artists in Gender Euphoria, say, or Taylor Mac’s epic A 24-Decade History of Popular Music.