It’s a dog’s life! Pet owner whose Cocker Spaniel’s crate looked like an ‘eyesore’ creates a cosy hideout under the stairs complete with a bed and toys

A crafty dog lover has transformed the underneath of her stairs into a cosy home for her Cocker Spaniel – complete with a bed, toys and a portrait hanging on the wall.

Natasha Hammond, from Warrington, posted photographs of the incredible transformation to the Mrs Hinch Made Me Do It Facebook group – where it has received more than 3,000 likes.

Rather than have her beloved pet Coco sleep in a crate under the staircase, Natasha decided to make her a cosy home of her own in the small space.

Now, Coco can relax in an enviable hutch complete with a bed, a box of toys, and a portrait on the wall. 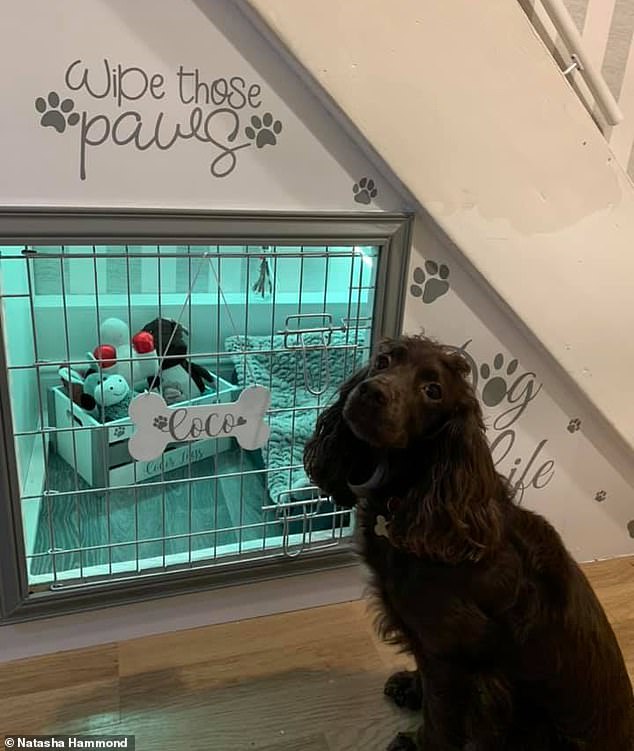 Natasha Hammond, from Warrington, created a cosy home for her Cocker Spaniel Coco (pictured) under the stairs of her home

The home also includes a crate door for Coco – because Natasha said the pup is ‘at her most comfortable in a crate’ – and paw print decal stickers across the wall near its entrance.

Speaking to FEMAIL, the mother-of-two explained how the six-year-old pup has been crate trained since the day she was brought home – and has slept in a crate every night since.

She said: ‘Coco was born into a whelping pen and was crate trained from the day we brought her home. We put the scent of her mum on a teddy and she settled straight away, no first night crying.

‘From then on, she slept in her crate with the door closed when we are out or at night. She likes it that way. 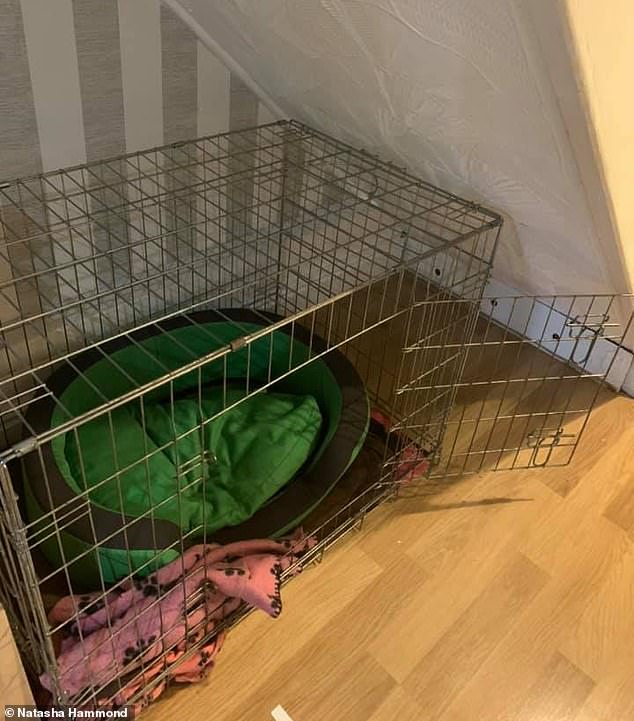 Mother-of-two Natasha said the six-year-old pup’s old crate – which was also  under the stairs – was an ‘eyesore’ in her hallway (Pictured: the dog’s crate before)

‘During the day the door is always open and she has beds in other areas of the house, although since this new room has been built she prefers to go in there.

‘We have tried to remove the crate before we built this room and she hated it. She cried, paced and was extremely anxious. A crate, or now her enclosed room, is her safe place.’

Natasha added that Coco has spent ‘so much time’ in the room since it was built – even opting for the hutch over other areas of the house.

‘She has spent so much time in there since it has been completed and she has much more space than she did in her old crate, which was the biggest size you could buy,’ she said. 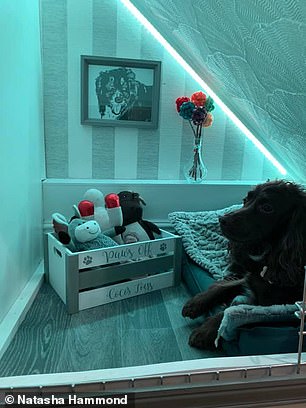 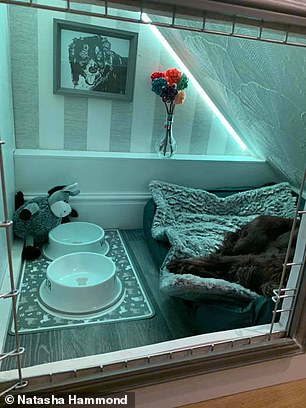 Coco (pictured in her new home) now has a much bigger area with a bed, toys and food and water bowls

Natasha explained she was inspired to make the transformation because Coco’s crate had ‘always looked an eyesore’ under the staircase.

‘The underside of our stairs have always been open and we loved the open plan feel,’ she said. ‘However recently we have struggled for space so have decided to build under stairs storage as part of our hallway re-design.

‘Coco’s crate has always lived under the stairs but looked an eyesore. Therefore we decided to build her room as part of the under stair project that would look and feel so much nicer.’ 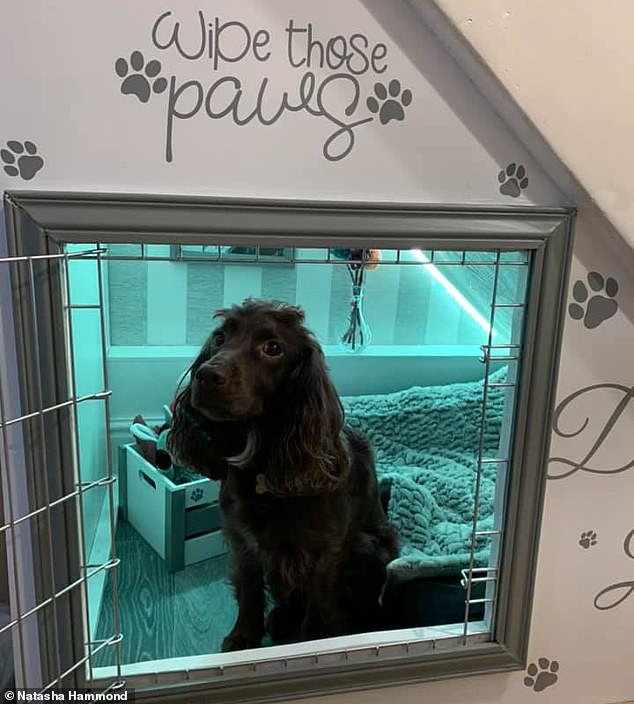 Natasha explained she was inspired to make the transformation because Coco’s crate had ‘always looked an eyesore’ under the stairs (Pictured: Coco in her new home)

Despite the dramatic overhaul, Natasha insisted the project ‘didn’t take long at all’ and was mostly completed on Sunday when she and her partner were both off work.

‘It didn’t take long at all. We did most of it on Sunday when we were both off and then decorated it after work on two evenings.

‘We found it really easy but we are both quite creative. I had a vision and Mike helped me to practically tweak it and problem solve. He’s really handy and good at building whereas I like to decorate and furnish!’

Natasha shared photographs of the astonishing transformation to various Facebook groups, where it has received more than 5,000 likes in total. 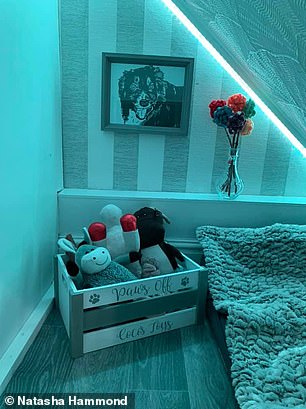 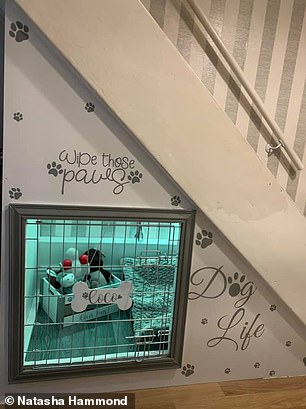 Despite the dramatic overhaul, Natasha insisted the project ‘didn’t take long at all’ and was mostly completed on Sunday when she and her partner were both off work 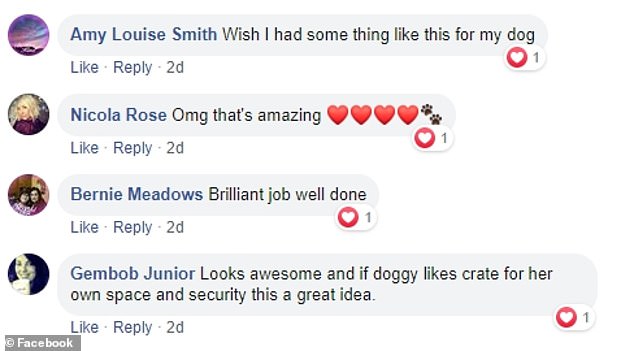 ‘I’m absolutely overwhelmed by the kindness in the comments from people it’s blown me away,’ she said.

Dozens of impressed social media users took to the comments of the post to praise the creative dog lover’s transformation.

One user said: ‘Oh my God. This is THE BEST EVER’.

Another added: ‘It’s fabulous, very lucky pooch you got’.