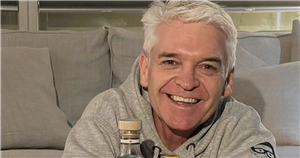 Phillip Schofield has given a glimpse inside his reported £2million bachelor pad in west London following his move out of the family home with his wife Steph last year after he came out as gay.

The 59 year old, who previously lived in a sprawling country house in Henley-on-Thames in Oxfordshire along with Steph and his two daughters Ruby and Molly, is now believed to be living in a plush six-bedroom home in Chiswick.

The This Morning presenter has since given a sneak peek inside the sleek home which is nearby to his co-host Holly Willoughby’s home – as well as Declan Donnelly’s pad and the home Lisa Armstrong shared with Ant McPartlin.

Phillip has revealed the bright and airy conservatory space which boasts huge windows to flood the space with natural light.

The presenter has opted for a muted colour scheme of grey which is seen with the huge sofa and cushions in the same hue.

Meanwhile Phillip has got a huge wooden coffee table which he has placed in the centre of the room – perfect for entertaining.

The Cube presenter has also showed off his huge bespoke artwork which is the title of his autobiography, Life's What You Make It, in the style of a Penguin Books cover.

Phillip has also revealed his very modern kitchen space which has gorgeous stainless-steel worktops and black and white artwork.

The dad of two has also added a splash of green to his kitchen with a gorgeous floral display to contrast beautifully against the white walls.

Phillip is also a fan of a tipple and has a chalkboard hanging in his kitchen which reads: “Drink more gin.”

Last year the ITV star was said to have been seen frequenting pubs on the banks of River Thames, which lies a short distance from his home.

One neighbour told MailOnline: “It’s caused quite a stir since he’s moved in and got people very excited. He seems like a very nice man and quite normal. You see him walking or cycling mainly and he smiles every time he goes past.”

While another added: “There’s quite a few famous people already living around here so Phillip Schofield moving in is not a big deal. A lot of people have been talking about it, but nobody bothers him. He’s a lovely bloke and I’m sure he’ll enjoy living in our community."

It comes after Phillip and Stephanie were reported to have been planning to build a new second home at their family home in Oxfordshire.

Speaking of the plans, a source told The Sun Online: “Phillip and Steph are getting on really well and are in no rush to make any big decisions.

“This annex can be used by any member of the family at any time — and is a great investment long-term, adding value to the property.”

It was later revealed how supportive Phillip's wife has been.

Speaking to The Sun, an insider claimed: “Phillip and Steph have had a lot of hard, painful conversations over the past ten months but remain as tight and devoted to one another as ever.

“She has been so supportive, and he won't skip off into the sunset now and abandon her. At the same time, he has no desire to become embroiled in a bitter and costly divorce battle.”

They continued: “Phillip is in no hurry to meet someone new, but obviously the D-word [divorce] has now been mooted, albeit in very loose and casual terms."

Phillip and Stephanie married in 1993 and share two grown-up children, Molly and Ruby, together.