Prince William jokes that Kate is dressed like a Christmas tree

Prince William joked that wife Kate was dressed liked a Christmas tree during a visit to a RAF base in Cyprus.

The Duke of Cambridge, 36, commented ‘My wife’s camouflaged against the tree’, as they posed for pictures with military personnel at RAF Akrotiri.

He went on to quip ‘Do you want me to move out of the photo?’, in order to let Kate pose by herself.

The Duchess of Cambridge, 36, donned a £666 green blazer by Canadian brand Smythe for the visit on Wednesday, along with a pair of £130 navy wide-legged trousers from Jigsaw. 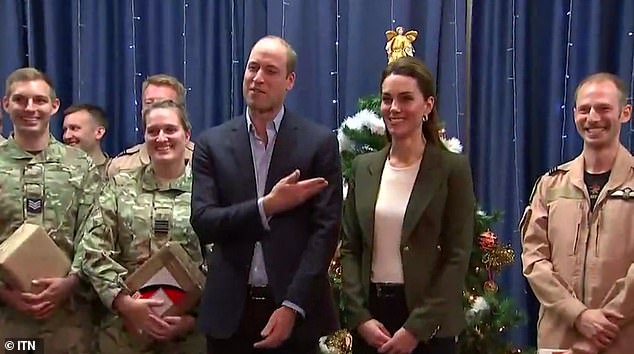 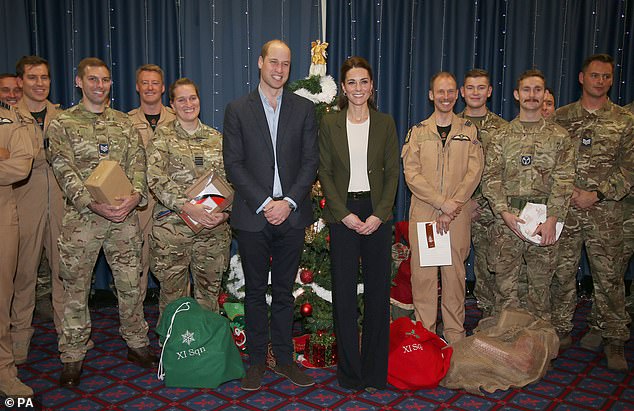 The Duke of Cambridge, 35, made the joke as he and Kate were posing for pictures with military personnel at RAF Akrotiri (above)

She finished off the look with a white silk top underneath, along with a matching olive green clutch bag by LK Bennett and co-ordinating heels.

Kate previously wore the chic blazer by the label, which is also one of Meghan’s favourites, during her tour of Canada in 2016.

She appeared to be taking a leaf out of sister-in-law Meghan by opting for a pair of wide-legged trousers for the engagement, which is one the Duchess of Sussex’s signature looks.

While Kate has previously worn dark skinny jeans and jeggings on royal engagements, this is believed to be the first time she has ever donned suit trousers during an official royal engagement. 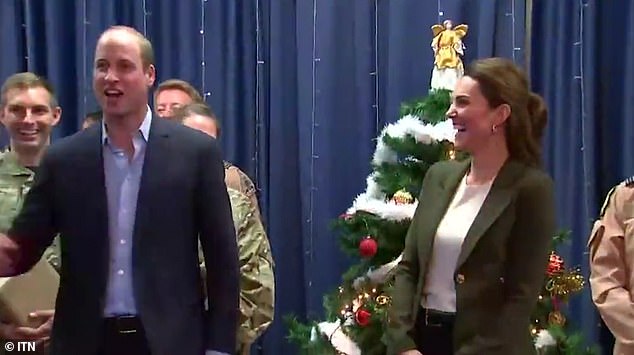 Kate was seen giggling as William went on to joke ‘Do you want me to move out of the photo?’, to let his wife pose by himself 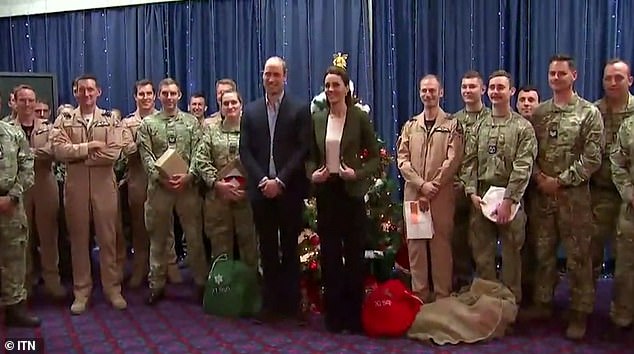 Both William and Kate looked to be in high spirits as they met with service personnel, delivering them presents from their families back at home.

The previous day, they had hosted a party at Kensington Palace for the partners, children and parents of those from RAF Coningsby and RAF Marham, who will be spending Christmas away from home.

The proud parents chatted happily about their children, with William telling pilots: ‘I told George this morning we were going to see the pilots today, and he said “If you see a helicopter can you take a picture?”‘ 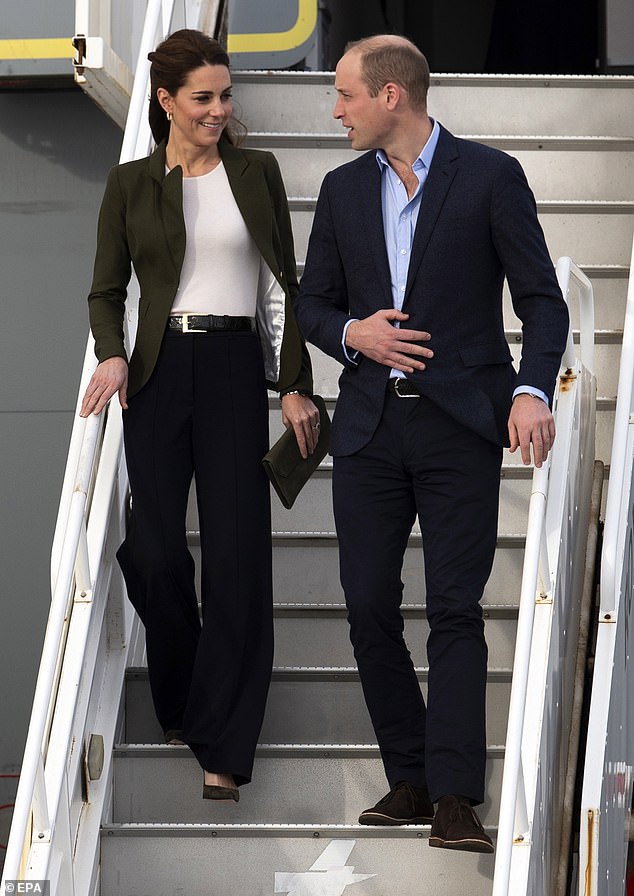 The Duchess (pictured arriving at the base with William) finished off the look with a white silk top underneath, along with an olive green clutch bag by LK Bennett and co-ordinating heels

Kate seemed to be channeling her sister-in-law’s style as she arrived in Cyprus wearing wide-legged trousers, left. Right, Meghan in a similar ensemble in London in September

On a walkabout outside the Warrant Officers and Sergeants’ Mess, the Duchess chatted to Rhian Davis, who was carrying 10-week-old daughter Dorothy in a sling.

Rhian said: ‘She asked whether she was sleeping through the night and she told me that Louis is starting to wave.’

Kate and William’s appearance on Wednesday came amid suggestions of a rift between them and the Sussexes, following the announcement that Meghan and Harry will be moving away from Kensington Palace next year.

However, Palace insiders have played down the rumours, and the couples are expected to spend Christmas together at Sandringham later this month.