Pinning her hopes on Sophie Wessex? The Queen puts her beloved daughter-in-law in the spotlight as she dedicates a stream of Instagram posts to the charity work of her youngest son’s wife

The Queen shone the spotlight on Sophie Wessex in the Royal Family’s Instagram stories today, with a string of posts showing her busy day of engagements in London.

The clips followed Prince Edward’s wife, 55, throughout her day, and shared snaps of her various meetings with its 7.5million followers.

The story started with a brief introduction to Sophie, sharing a picture of her wedding to Prince Edward, also 55, in 1999, and explaining that she is married to the Queen’s youngest son.

It then revealed her her links to 85 charities and overseas work, before moving on to her engagements of the day at St James’s Palace.

This follows reports that Sophie Wessex was singled out as the Queen’s saving grace following turmoil in the royal family, with the announcement that the Duke and Duchess of Sussex would renounce their royal duties, and the divorce of Princess Anne’s eldest son Peter Phillips from wife Autumn. 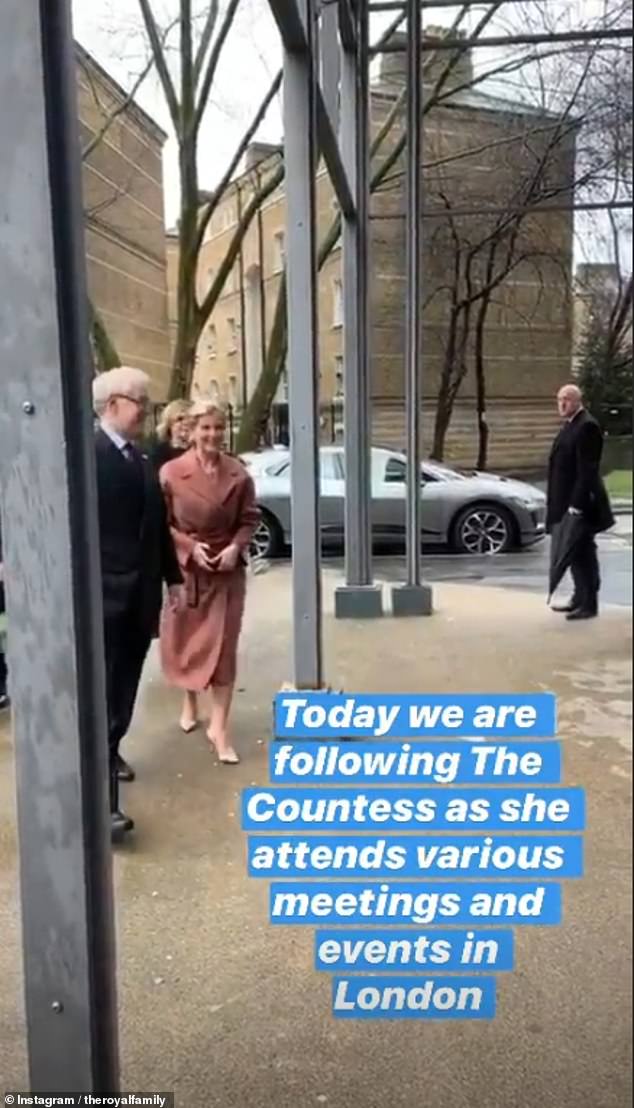 The Queen put Sophie Wessex, 55, in the spotlight with an Instagram story dedicated to her beloved daughter-in-law’s busy day (pictured) 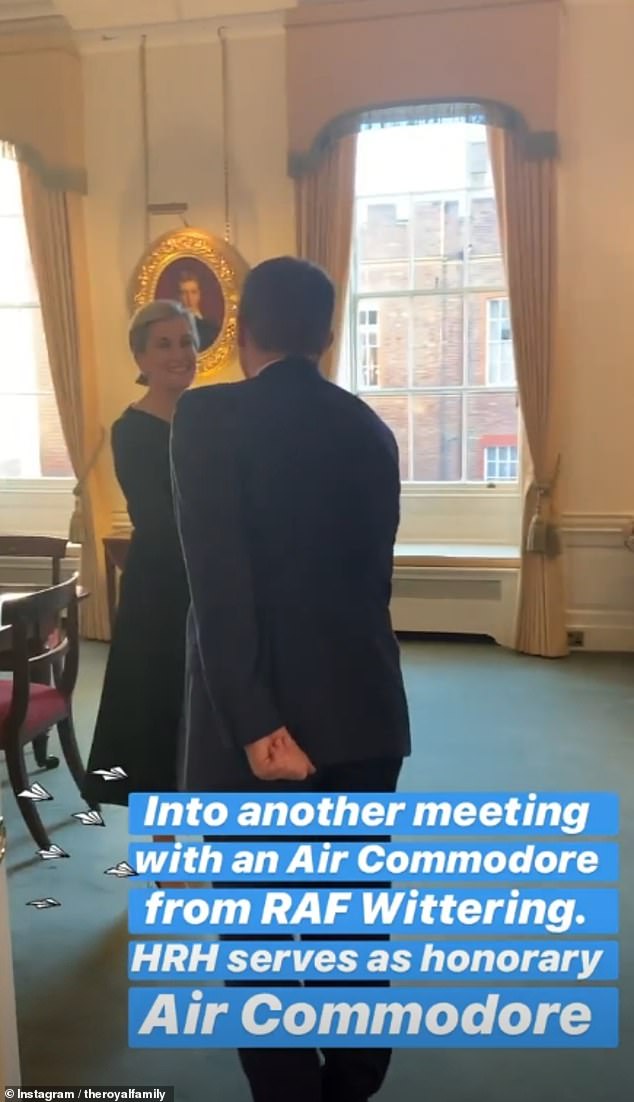 The story followed Sophie through her numerous engagements, giving context on her day, the locations she travelled to and her charity work (pictured at St James’s Palace) 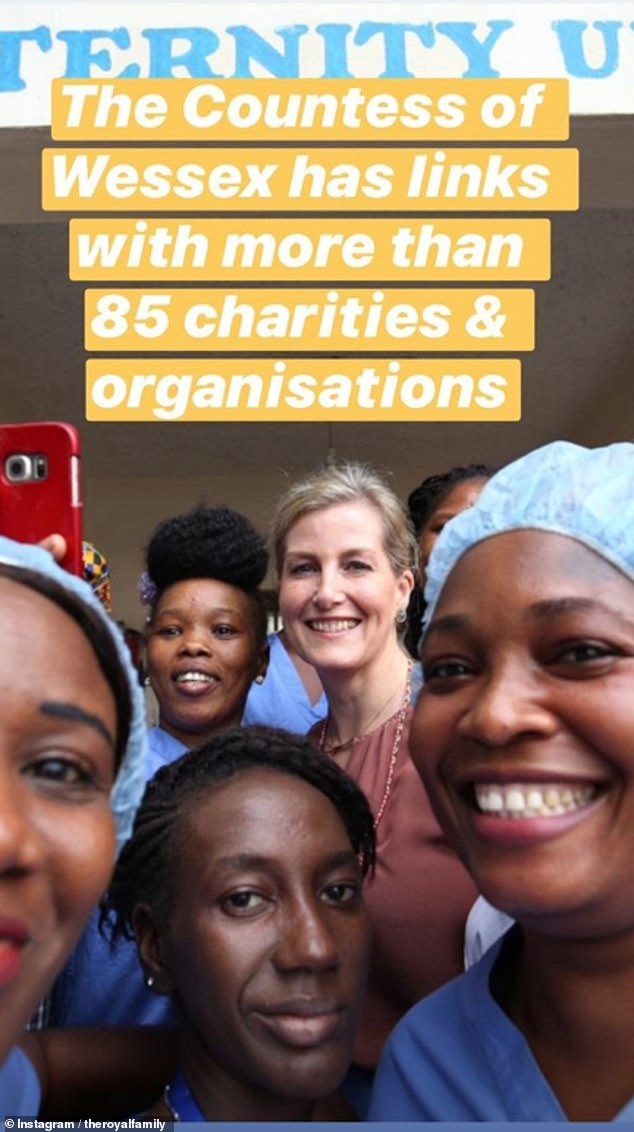 On Instagram, the Royal Family account put the emphasis on Sophie’s charity work (pictured), adding it often took her overseas

This morning, fresh from a family holiday in St Moritz, Sophie, donned a dusky pink coat as she arrived at the Central School of Ballet to meet with its dancers and staff.’

The Instagram story showed a smiling and relaxed Sophie walking up to the dance institution, of which she has been the patron since 2003.

In another clip shared in the Instagram story, the royal had taken off her coat and could be seen chatting to dancers in costumes as part of her visit.

Sophie also took the time to speak to a duo of dancing partners, who studied at the institution, which was established in 1982 and has now flourished into Europe’s leading dance centres. 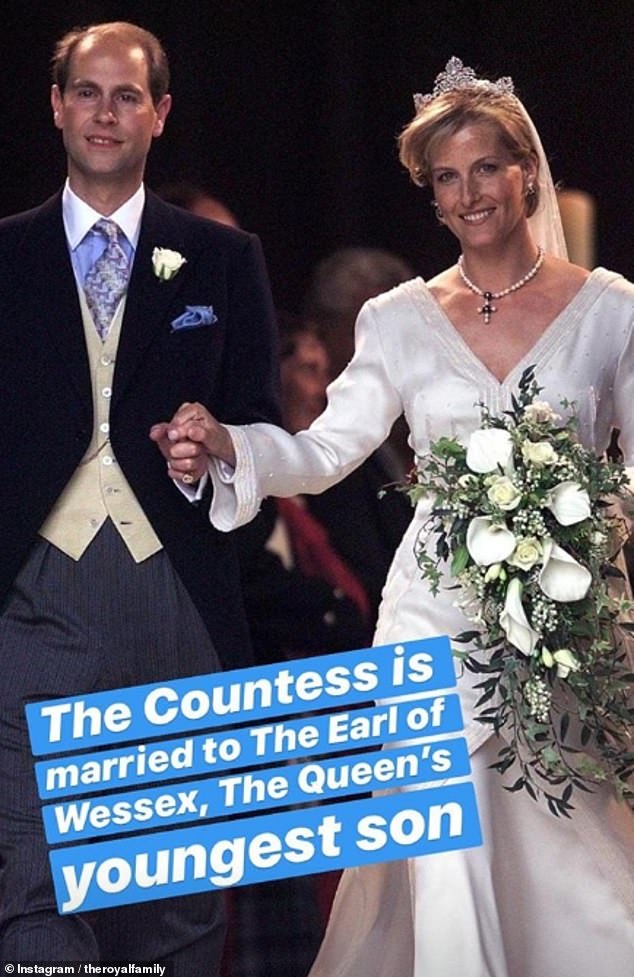 A picture of Sophie’s wedding to Prince Edward was also shared. The couple celebrated their 20 years anniversary on 19 June 2019 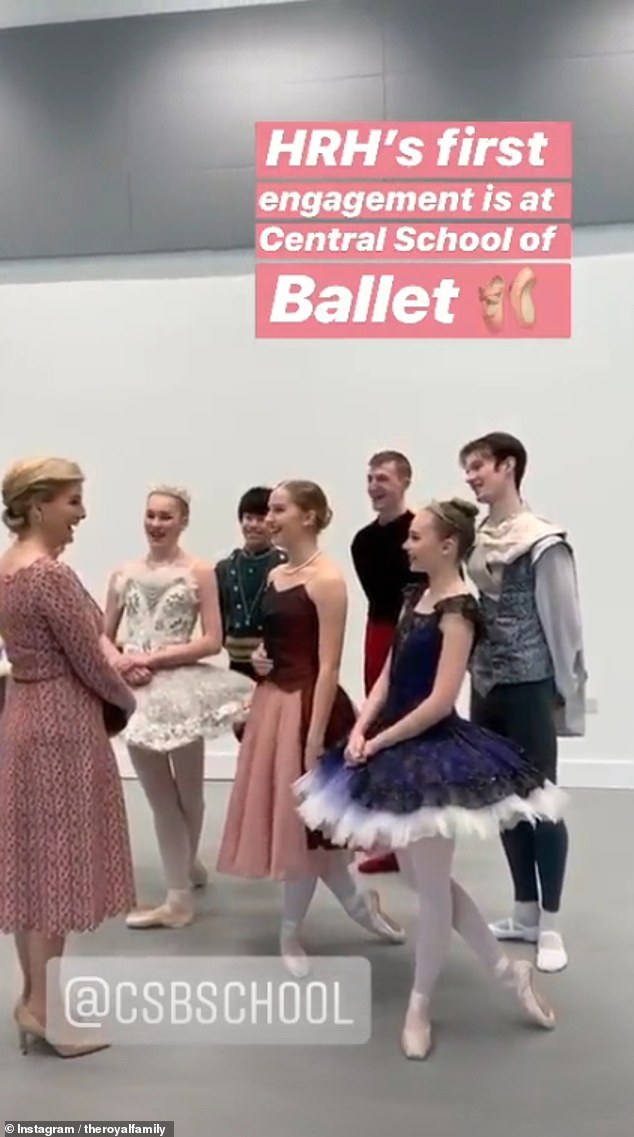 This morning, Sophie met with dancers and staff at the Central School of Ballet, in London (pictured) 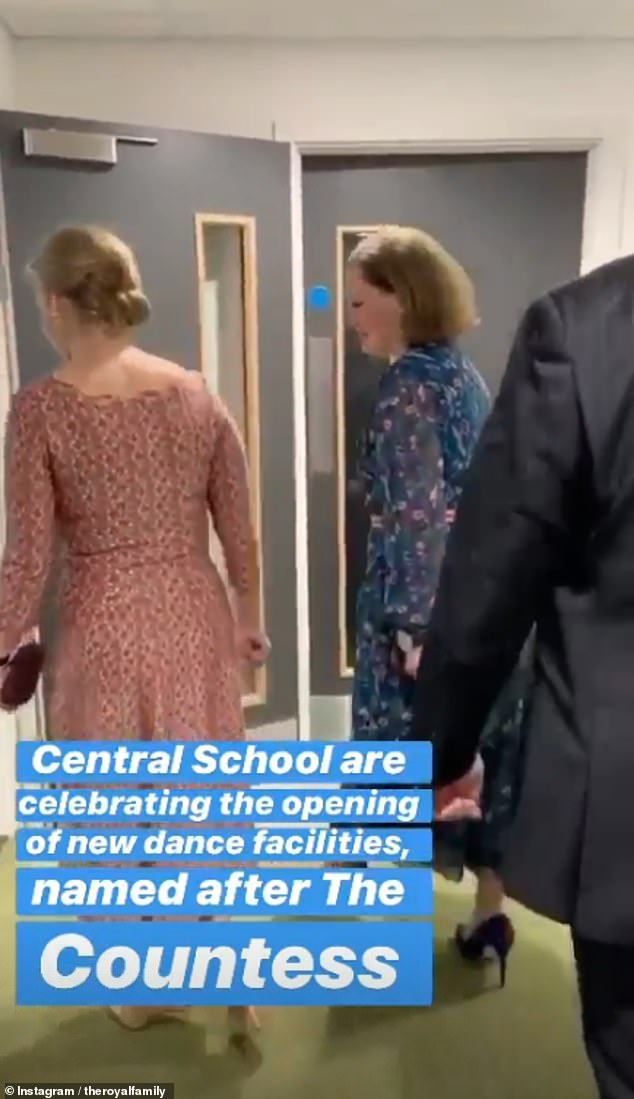 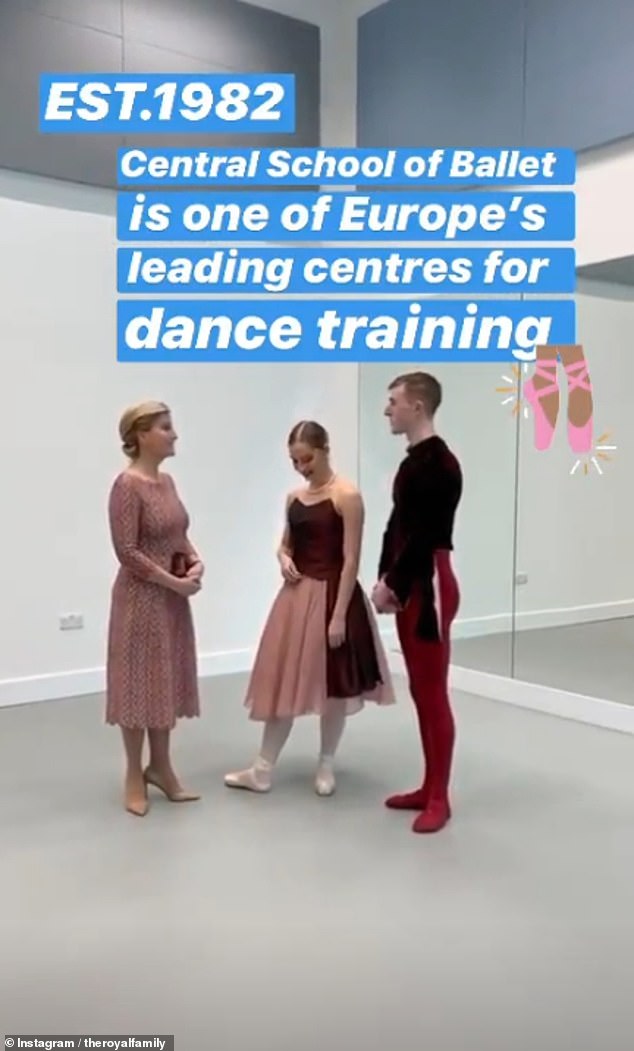 The central school of Dance was established in 1982 and has now become a leading centre for dance training in Europe (pictured: Sophie with dancers)

During her visit, Sophie was asked to name the facilities’ new studio, which were named The Countess of Wessex Studios after her in her honour on the South Bank in Southwark.

The moment was captured and shared on the Instagram story as well, before Sophie headed to St James’s Palace for the rest of the afternoon, as the story explained it was used as a working space by several royals.

The royal performed a swift outfit change and donned a sleek black dress for the second part of her busy day. 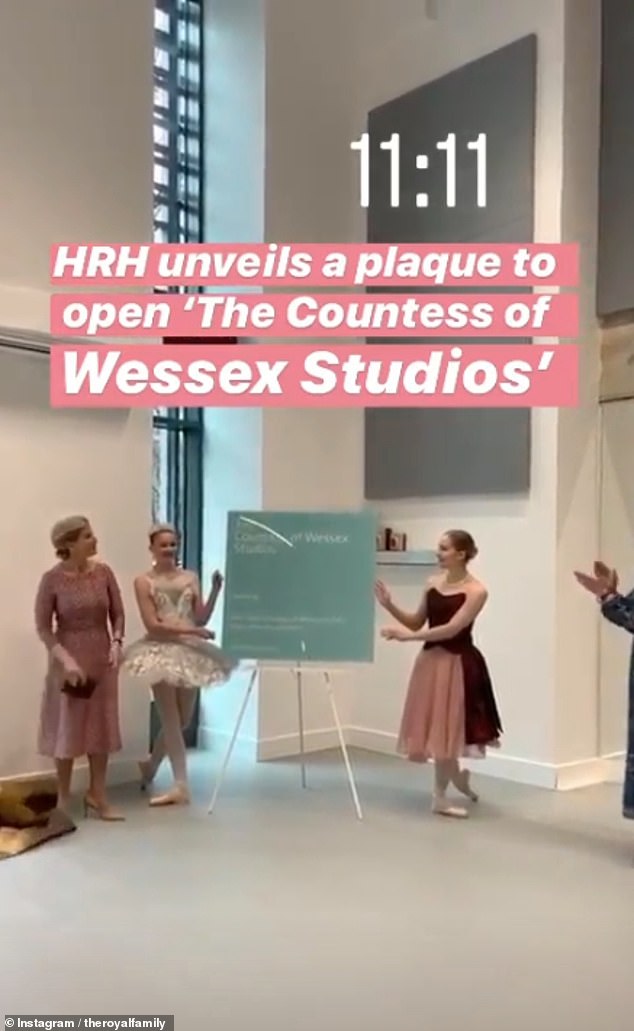 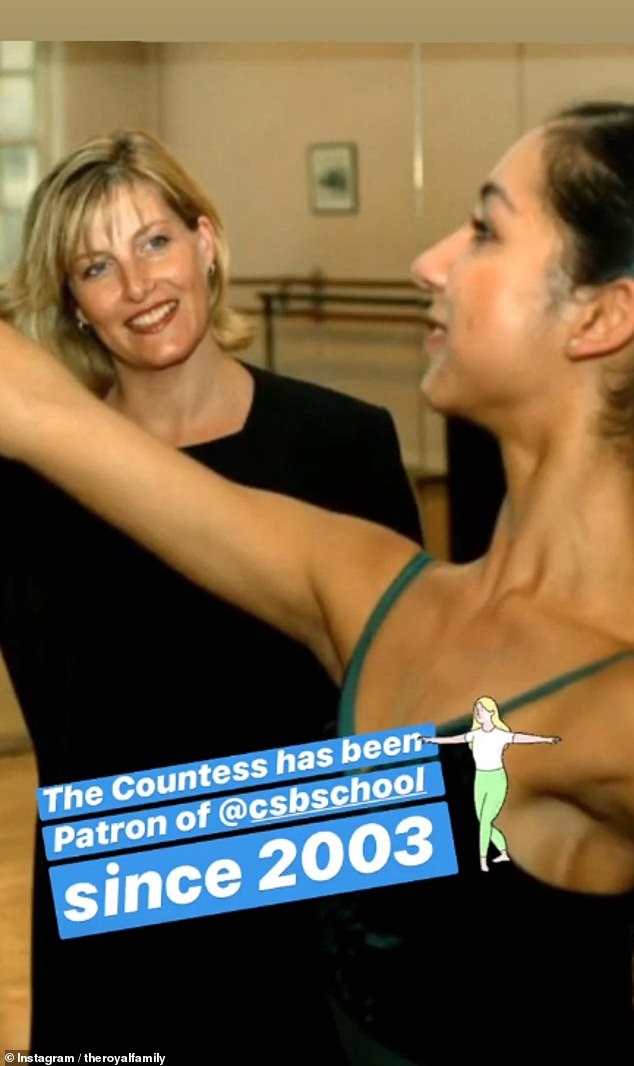 The Royal Family account shared a throwback picture of Sophie in 2003, four years after her 1999 wedding to Prince Edward

There, Sophie had her picture taken for St John Ambulance, a first aid and emergency medical service charity operating in England, of which she has been the president since 2004.

The royal could be seen sporting a beautiful black cape for the occasion.

The afternoon brought meetings at St James Palace, two of which were included in the Instagram story. 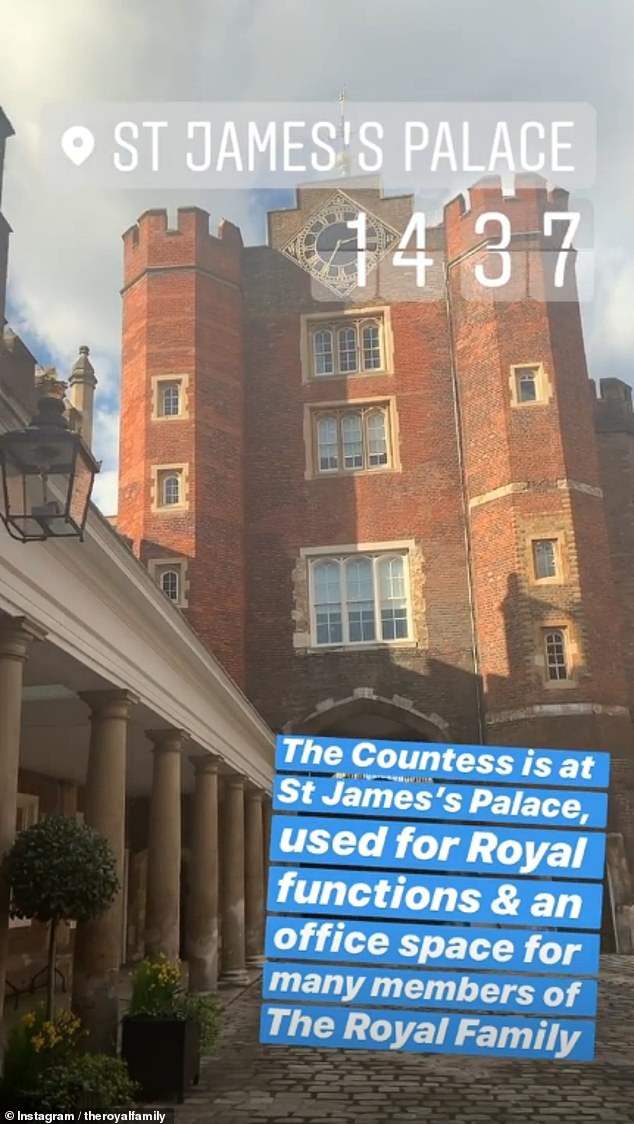 Sophie headed to St James’s Palace for the rest of the afternoon, as the story explained it was used as a working space by several royals 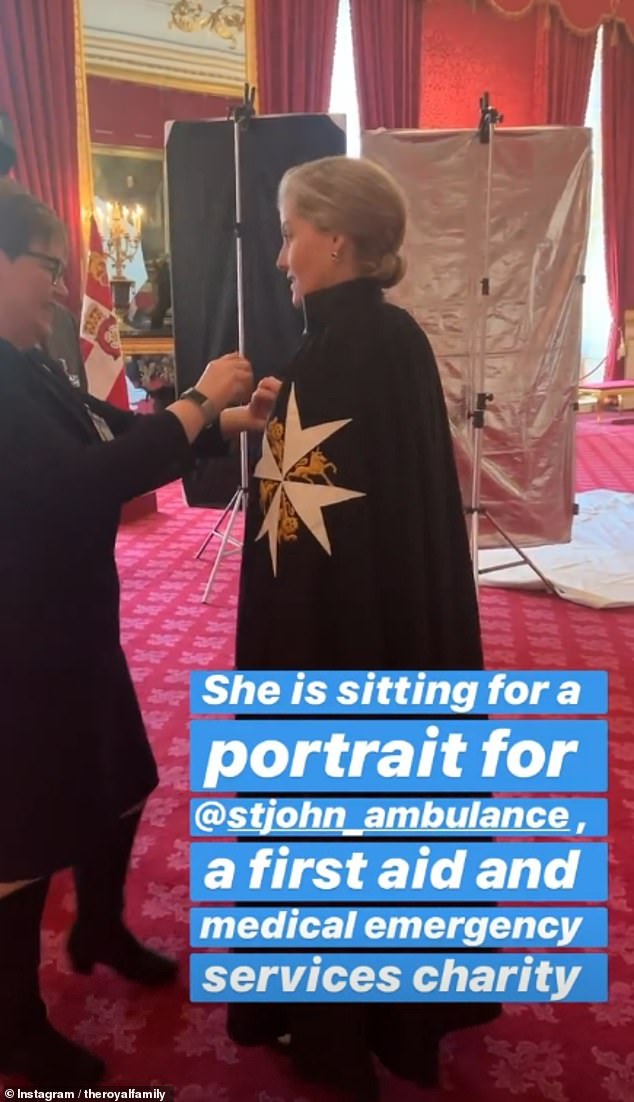 There, Sophie had her picture taken for St John Ambulance, a first aid and emergency medical service charity operating in England 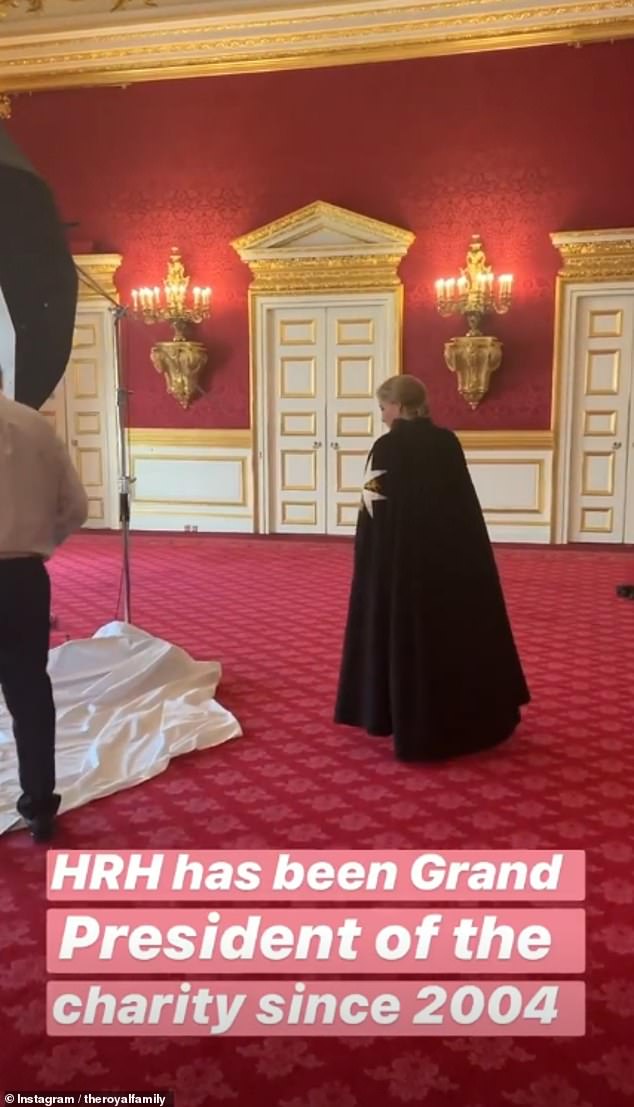 Sophie wore a beautiful black cape for her portrait. She has been the charity’s president since 2004

Sophie received two women from the Queen Alexandra Royal Army Nursing Corps, as well as a commodore from the Royal Air Force.

It was explained in the story that Sophie, who is an honourary air commodore met with her commandants regularly to keep updated on their work.

The story also shared a picture of Sophie with her husband Prince Edward and their two children, Lady Louise, 16, and James, Viscount Severn, 12. 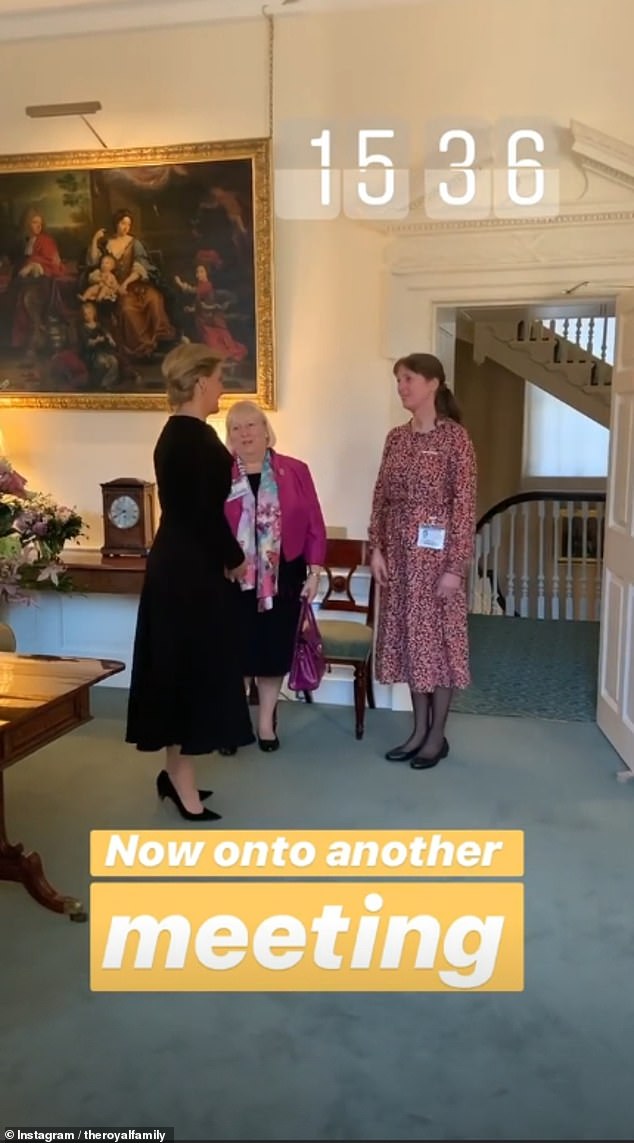 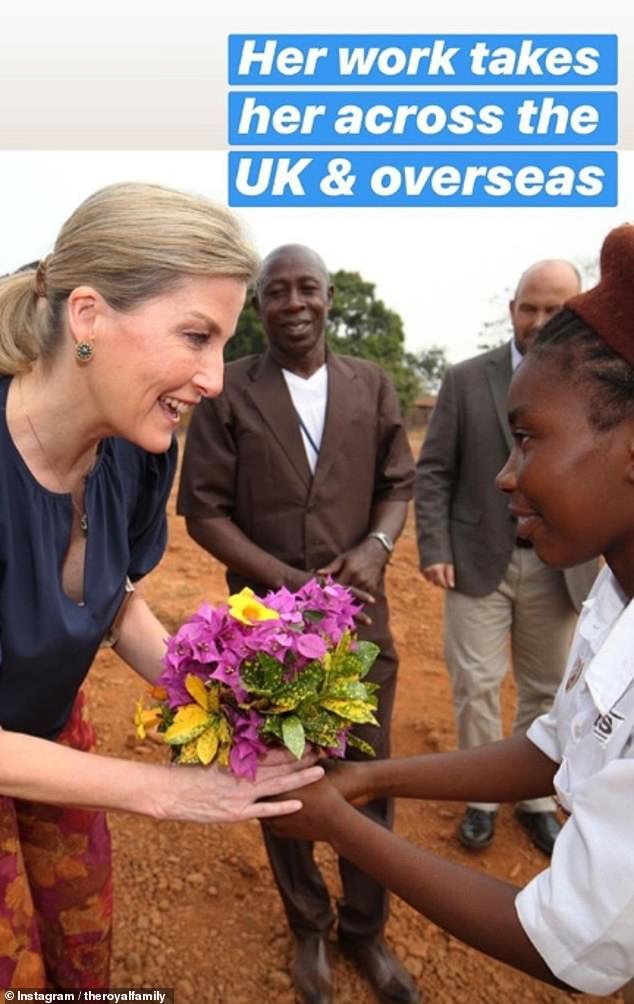 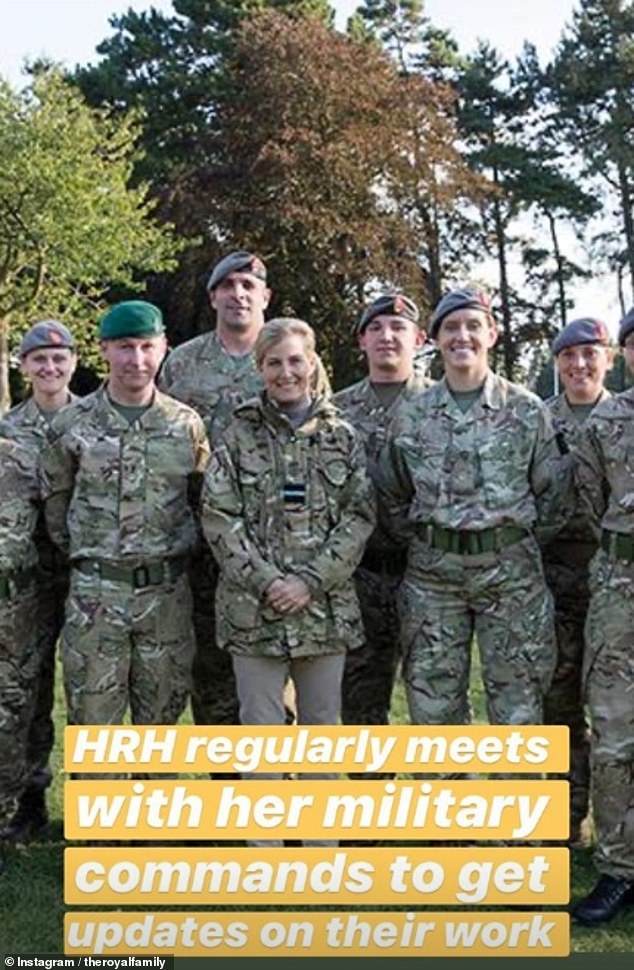 The story also praised her close relationship with the military, explaining how Sophie regularly kept in touch with her military commands

Several royal experts and insiders suggested that Sophie was set to take on more royal responsibility and represent the Queen, 93, at more engagements after Prince Harry, 35, and Meghan Markle’s, 38, decision to step down as senior royals.

A royal source has revealed how the Countess has been chosen by Buckingham Palace to step into the spotlight in the coming months.

The source told The Sun: ‘Sophie’s a long-term favourite of the Queen and has been singled out as a person the Palace would like to help ease the burden.’

A recent job  advert showed the Wessexes are hiring an Assistant Private Secretary, suggesting an increase in duties. 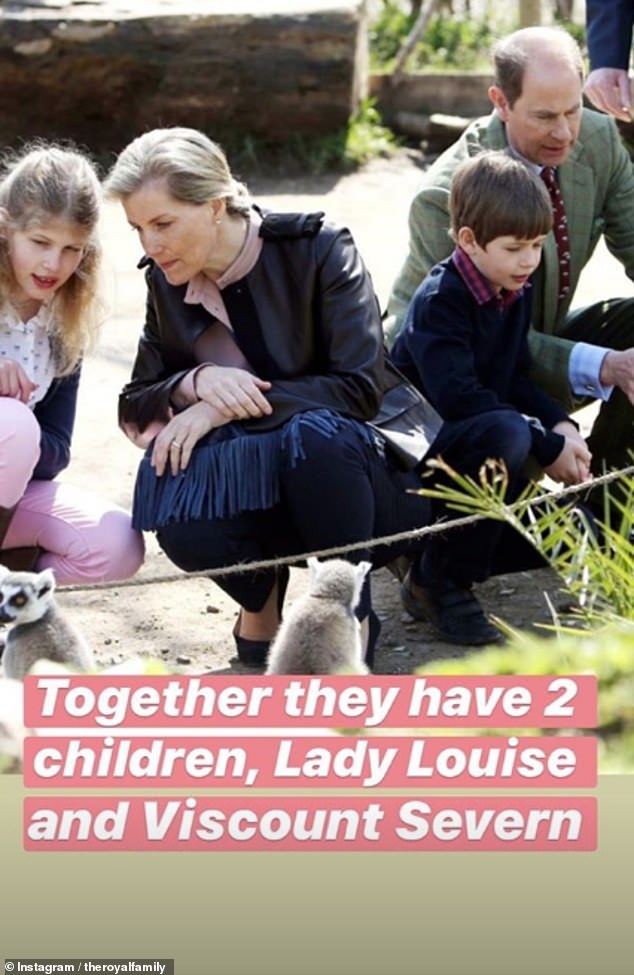 Sophie’s motherly side was also represented, with a lovely picture of her, Prince Edward and their two children Lady Louise, 16 and James, Viscount Severn, 12