Treasurer Josh Frydenberg says Liberal MP Andrew Laming will leave politics at the next election after a string of stories about his poor behaviour towards women came to light.

Mr Laming’s female colleagues said they wanted him out of politics after a Brisbane woman accused the Queensland MP of taking a mobile phone photo of her bottom while her underwear was visible in 2019. 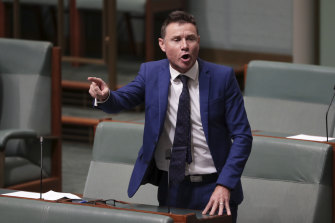 Mr Laming has stood aside from his parliamentary roles and is undertaking counselling and cultural awareness training. He said on Saturday he would “have more to say on my future as soon as that process is completed”.

But on Sunday, deputy Liberal leader Mr Frydenberg said Mr Laming would not recontest the next election.

“The Prime Minister spoke to Andrew yesterday and made it very clear what was expected of our MPs and Andrew has reflected on that conversation with the Prime Minister,” Mr Frydenberg said on Sunday.

“Following that conversation with the Prime Minister he has decided not to recontest the next election.”

The latest incident came three days after Nine News revealed the MP had bullied two women, Alix Russo and Sheena Hewlett, online and a day after he seemed to make light of his own apology to them.

Senator Henderson said she was appalled by his behaviour, and she hoped he decided to leave Parliament.

“We can certainly say as Liberal women this is not good enough, and we won’t accept it,” she told ABC’s Insiders on Sunday.

“I’m not comfortable with the conduct and I hope that Andrew makes the right decision.”

Dr Allen said it appeared “the stress must be getting to him” and his behaviour was “completely outrageous”.

“He needs to have a pretty serious look about whether he will recontest the next general election,” she said. “I think 17 years is a long time to be in Parliament and I think he might like to reconsider his future.”

Prime Minister Scott Morrison said on Saturday – before the latest revelations emerged – that he had given Mr Laming a second dressing-down in three days. He stopped short of endorsing Mr Laming as fit to continue to serve in Federal Parliament, saying he was sure preselectors “will be thinking about all of these things”

If Mr Laming were to leave Parliament before the next election, the government would be thrust into a minority in the lower house at least until a byelection were held. It is down to 76 seats after Craig Kelly quit the Liberals last month to sit as an independent, but that number includes the Speaker who only holds a casting vote in the event of a tie.

Mr Laming holds his seat of Bowman by 10.24 per cent, increasing his margin by more than three points at the 2019 election.