Record DEA bust could “provide a dose of meth for every man, woman and child” in U.S. and Mexico

Federal authorities on Wednesday showed off results of Southern California raids early this month that led to the biggest domestic seizure of methamphetamine in U.S. Drug Enforcement Administration history. The 2,224 pounds of methamphetamine was seized Oct. 2 during an investigation of a drug-trafficking organization with ties to the Sinaloa cartel, the DEA said in a statement.

“These two seizures are more than enough to provide a dose of meth for every man, woman and child in the United States and Mexico,” said DEA Acting Administrator Timothy J. Shea.

CBS Los Angeles reports some of the drugs, concealed inside duffle bags, was apparently passed between cars in public — including at a Sam’s Club parking lot in Moreno Valley. 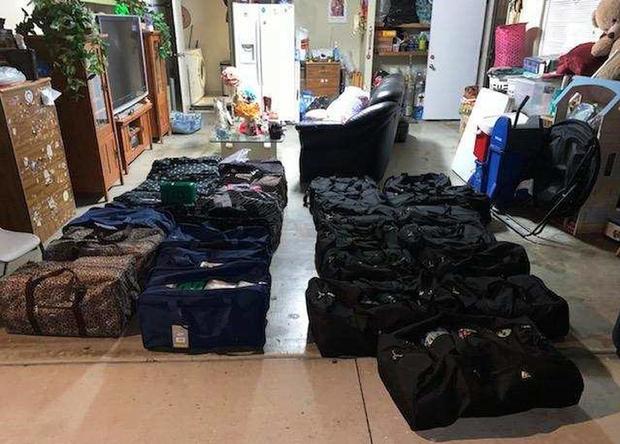 “Wow,” Lisa Serrano, a shopper, told the station. “I don’t know how they hide that.”

Narcotics detectives with the Fontana Police Department spotted the exchange. The department said members of its DEA task force has been on the trail of the massive drug ring with ties to the Sinaloa drug cartel since June.

The investigation led to search warrants being served at narcotics stash houses in the Riverside County cities of Moreno Valley and Perris, east of Los Angeles.

Shea and other law enforcement officials displayed the  evidence  during a press conference at a DEA warehouse in Montebello.

“The largest DEA domestic seizure of methamphetamine in history is a significant blow to the cartels, but more importantly it is a gigantic victory for communities throughout Southern California and the United States who have had to deal with the torrent of methamphetamine coming into their neighborhoods,” Shea said.

The DEA said the Los Angeles area is the preferred transportation hub for drug traffickers because it is north of the border and it is easier to blend into big cities.

“They can break the drug loads down and do distribution throughout the country,” said Bill Bodner, special agent in charge of the DEA’s Los Angeles Field Division.

People who live in the Inland Empire told CBS Los Angeles it was scary not knowing if the stash houses were located in their communities.

The DEA’s big bust came just a week before another huge meth seizure.