Rosalind Cartwright, Psychologist and ‘Queen of Dreams,’ Dies at 98 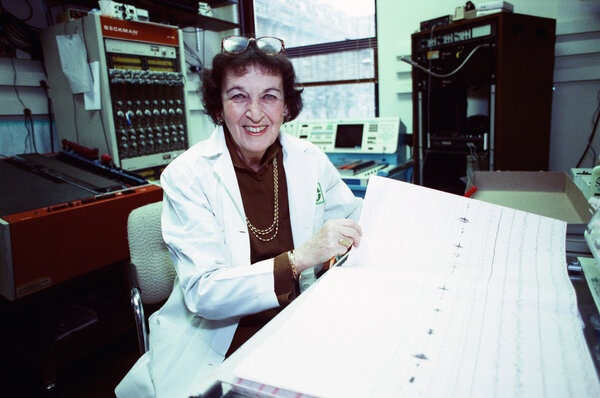 In 1999, Rosalind D. Cartwright, a sleep expert, testified for the defense in the murder trial of a man who had arisen from his bed early one night, gathered up tools to fix his pool’s filter pump, stabbed his beloved wife to death, rolled her into the pool and gone back to bed. When he was awakened by the police, he said he had no memory of his actions.

His lawyers argued that the man, who had no motive to kill his wife, had been sleepwalking, and therefore was in an unconscious state and not responsible for his behavior. Dr. Cartwright, a renowned sleep researcher who a decade earlier had successfully served as a witness for the defense in a similar case (she worked pro bono in both trials), agreed.

The jury did not, and the man was sentenced to life in prison. As Dr. Cartwright was leaving the courtroom, however, a bailiff asked for her business card. Abashedly, he told her, “I beat people up in my sleep.”

Nicknamed the Queen of Dreams by her peers, Dr. Cartwright studied the role of dreaming in divorce-induced depression, worked with sleep apnea patients and their frustrated spouses, and helped open one of the first sleep disorder clinics.

She died on Jan. 15 at her home in Chicago. She was 98. Her daughter, Carolyn Cartwright, said the cause was a heart attack.

The earlier sleepwalking murder case that hinged on Dr. Cartwright’s testimony was a notorious one, even inspiring a television movie, “The Sleepwalker Killing”: In 1987 a young Canadian man had murdered his mother-in-law and brutally attacked his father-in-law — after driving from his home to theirs in his pajamas — though he, like the pool man, had no motive to do so.

The man was acquitted, and the attacks were ruled “non-insane automatism.” From Dr. Cartwright’s years of research on sleep disorders, she knew the triggers that can propel someone with a history of sleepwalking out of bed. He had gambling debts and marital worries, and was seriously sleep deprived. EEG readings of his brain waves showed him to have an abnormality in moving from one stage of sleep to another.

But murder was not Dr. Cartwright’s specialty. Dreaming was.

She knew that dreams played a role in regulating a person’s emotions and sense of self. When sleep was disrupted, dreams could not do their work, stitching the messy narratives of life into an emotionally coherent tapestry.

Rosalind Falk was born on Dec. 30, 1922, in New York City, the second-youngest of four children. Her mother, Stella (Hein) Falk, was a poet; her father, Henry, had trained as a lawyer but later became a successful real estate developer in Toronto.

Stella Falk was a believer in the healing power of sleep. Her children jokingly called their home “the house of sacred sleep.” She was also fascinated by dreams, and loved to tell hers at the family dinner table. Her husband would shake his head and say, “Stella, you have such an interesting night life.”

Years later, in 1977, when Dr. Cartwright published her first book, she titled it “Night Life: Explorations in Dreaming.”

Dr. Cartwright grew up believing that sleep was worthy of study — why was it healing, she wondered, and what role did dreams play in that healing? Unable to find a sleep program at college, she studied psychology instead, earning her undergraduate and master’s degrees at the University of Toronto and her Ph.D. from Cornell University.

At Cornell, she was an early researcher of empathy, conducting the first tests to measure it and challenging the prevailing wisdom that it was an imaginative projection; instead, she said in a paper, it was the ability to “accurately transpose oneself” into the experiences of another. After teaching for two years at Mount Holyoke College in Massachusetts, she was hired as a researcher at the University of Chicago by Carl Rogers, a founder of what is known as humanistic psychotherapy, who was interested in the work she had done on empathy.

It would be a decade before Dr. Cartwright found her way into sleep research, and it happened almost by accident. She was a professor of psychology at the University of Illinois College of Medicine. Her husband, Desmond Cartwright, a British psychologist whom she married in the early 1950s, had walked out on her and their two young daughters, and as she recalled in “Crisis Dreaming: Using Your Dreams to Solve Your Problems” (1992, written with Lynne Lamberg), she was devastated and deeply depressed, her sleep roiled by anxiety-ridden dreams.

Since she couldn’t sleep, Dr. Cartwright figured she might as well use her nights for something productive. She hired night babysitters and opened her first sleep lab, using her training in psychotherapy to understand the narratives in the dreams her research subjects reported.

That first sleep lab was in the men’s room of an unused psychiatric unit at the University of Illinois Medical College, with a tub room attached. She replaced the tubs with beds; to block off the space from the urinals, she used acoustical paneling. This made the area soundproof, which turned out to be a deterrent to sleep for her urban subjects, so she piped in street noise.

At first, her subjects were all men; at the time, she said, it was not considered “nice” for women to sleep somewhere for pay.

Early on, Dr. Cartwright studied the relationship between REM sleep and dreaming. She wondered if taking hallucinogens would do the work of dreams (it didn’t) and if watching pornographic films would affect dreams (it did).

Dr. Cartwright would go on to study the dreams of those going through a divorce, and from the substance of their dreams she was able to predict who might recover more easily. (Those who had horrible nightmares, early in the night, tended to get better more quickly.) She also taught her subjects how to take control of their dream narratives, and better their emotional outcomes, in a kind of autosuggestion.

“Dreams are designed to help us maintain our self-identity, our sense of who we are, as our life circumstances change,” Dr. Cartwright wrote in “The Twenty-Four Hour Mind: The Role of Sleep and Dreaming in Our Emotional Lives” (2010). “A bad dream, like an elevated temperature, is a sign that something is wrong.”

Following the years her mother was working nights, Carolyn Cartwright said, she suffered from brutal nightmares. “It was a traumatic time, and I was pretty mad at one point,” she said. In her dreams, monstrous giants were chasing her. She had wings to fly, but they wouldn’t work.

Her mother took matters in hand. At bedtime, she would sit on the end of her daughter’s bed and say, “Maybe next time you could get the monsters to run slower, and you could make your wings bigger.”

She has not had a bad dream since. It was a gift, Ms. Cartwright said — “the gift of sleep.”

In 1977, Dr. Cartwright became the chairwoman of the Department of Behavioral Sciences at Rush University Medical Center in Chicago and founded its sleep disorder research and treatment center the next year. She stepped down in 2008 and became professor emeritus.

“In the night collecting dreams,” Dr. Cartwright told an interviewer in 2011, “I felt at home.”

She studied and treated disorders like sleepwalking, sleep sex, sleep eating and the troubles of those she called the sleep explorers, who would stray from their homes while sleepwalking. She also studied sleep apnea, which she correctly diagnosed as a malady affecting two people: the snorer and his or her long-suffering partner.

Dr. Cartwright was married four times, twice to the same man, Richard P. Dennis, president of the Great Books Foundation. He died in 1996. Dr. Cartwright’s daughter Christine Cartwright, a folklore expert, died in 1983, struck by a car while walking in rural New Jersey. In addition to her daughter Carolyn, Dr. Cartwright is survived by a stepdaughter, Amy Russell; three grandchildren; and three great-grandchildren.

After his trial, Kenneth Parks, the young Canadian man who was acquitted of murder thanks to Dr. Cartwright’s testimony, asked her if she could help him retrieve his memories of the dreadful night. As she recalled in “The Twenty-Four Hour Mind,” she asked him gently, “Would you want that?” He hung his head before he answered, “Only if you could take it away again.”