The actor explains why his “anxiety was through the roof” filming Sunday’s episode, teases Season 11 and expresses his desire to keep playing Aaron even after the show ends.

“One More,” the latest of the six new episodes added to Season 10 of “The Walking Dead,” focused on both Aaron (Ross Marquand) and Gabriel (Seth Gilliam) — and ended with a shocking moment that will clearly change things between the two characters as the show heads into its final season.

The hour revolved around the two going on a supply run together, as resources remain scarce for the rest of the survivors following their battle with the Whisperers. While they don’t find much, they do score (and drink) a ton of whiskey, getting introspective the more tipsy they throw back. As the night goes on, Gabriel admits he doesn’t want to be a preacher anymore, explains why he’s jaded with the lack of humanity in the world and proclaims, “Evil people aren’t the exception to the rule, they are the rule.” Dark, right?

They’re briefly captured by a dangerous outsider named Mays (guest star Robert Patrick), are forced to play — but, thankfully, survive — a game of Russian Roulette but are released after Gabriel tells him that love, mercy and forgiveness are all possible in their community. “It’s full of people who were lost and found their way back. You can too, if you let us,” he said. While the talk worked, Gabriel proves his words were nothing but a negotiation tactic — and clobbers Mays with Aaron’s mace of an arm, killing him. Aaron — and viewers, we’re sure — is understandably shocked.

TooFab caught up with Marquand, who opened up about filming the new episodes during the pandemic, explained how the hour’s evens will change things going forward, talked production on Season 11 and revealed his desire to keep workin in the Walking Dead universe even after the parent show wraps.

When you first heard new episodes would be coming, at what point did you know you’d be paired with Seth/Gabriel and what made you excited abut that pairing?

I think I found out relatively soon after I learned they’d be doing the new episodes. They were still figuring out exactly how many there were gonna be for each of us, but there was talk there was going to be about six episodes. And then about a month after, I learned I was going to be working with Seth and I was so thrilled. I love Seth in general and I love working with him. He always brings such great choices and he’s a helluva actor so he’s so fun to work with. And we just had a great time. It was obviously a weird time to be shooting, but you know, I think we did it as safely as we possibly could given the circumstances and I really love how the episode turned out.

How different was it filming this more self-contained episode? Aside from the safety precautions, it’s also a full episode for you two instead of the usual ensemble.

It was definitely the most screen time I’ve had in an episode which was actually wonderful and a real blessing. I do think we were all feeling the weight and anxiety of shooting during a pandemic. Of course, most of our scenes were outside which was a huge godsend because my anxiety was through the roof shooting during a global pandemic. To be honest, the production did everything in their power to make sure it was safe. We felt very, very taken care of during the entire run. I feel like this is proof that more productions, whether it’s in the entertainment industry or other industries, you can absolutely reopen in a safe and healthy way, it just has to be done in a certain way.

When you start reading the Russian roulette stuff in the script, what starts going through your mind — you know it’s not going to end well for someone.

Seth and I talked about this but it definitely conjured up our shared love of The Deer Hunter and that’s one of my favorite movies and I think that we love that nod to The Deer Hunter, but also wanted to make it our own. I think the great thing about our episode versus Deer Hunter is both these men who are forced to play this horrible game, they’re not broken, they’re not trying to kill themselves, they’re not living on the edge, they’re actually living for each other and there’s this unspoken assurance that if one kills himself, the other will go on and take care of each others kids and that there will be no malice or hatred in the other person’s mind. You gotta do what you gotta do and I really love that it was written that way.

It doesn’t end well for Mayes, Robert Patrick’s character. How do you think this will change Aaron and Gabriel’s relationship going forward — Gabriel even used Aaron’s own hand to kill the guy in front of him.

Yeah, I think it’s gonna change things for sure. I don’t see how Aaron couldn’t look at him a little differently. Especially since, sitting in the warehouse having drinks and getting really deep on the nature of humanity, I think he’s seeing a different side of Gabriel he’s never seen before. A side that’s kind of given up on the goodness of the people and that genuinely surprises Aaron, because I think that was the thing he always felt like he had in common with Father Gabriel, was their shared belief that there is goodness in the world, there are good people left and we need to bring those people into the fold. So when Gabriel says ‘Evil people aren’t the exception to the rule, they are the rule,’ oh gosh, alright, maybe I misread you. He’s definitely going to be looking at him differently from now on. 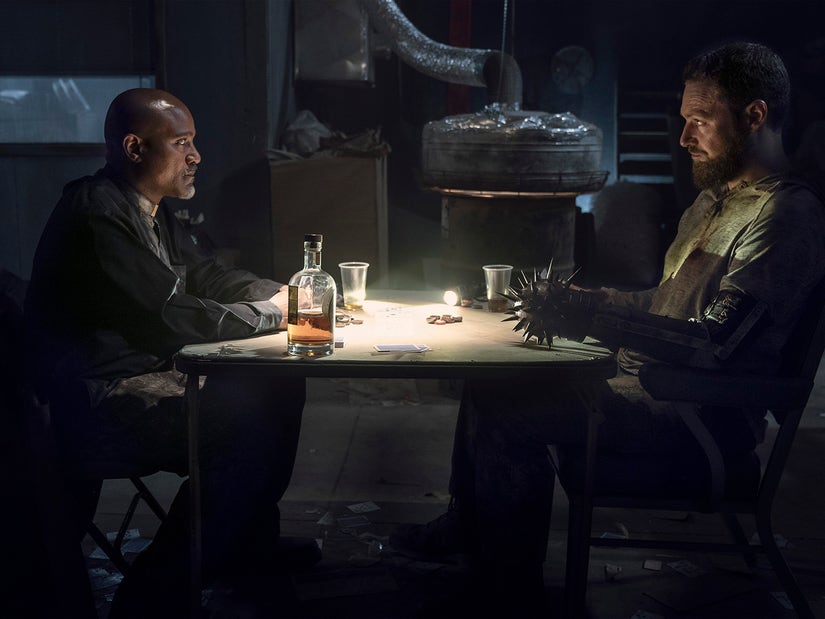 That also seems like a sentiment being shared by a few characters right now, like Carol saying what’s the point of rebuilding Alexandria if someone else is going to come and take it down again. Is that a mindset we may see more of in Season 11?

I think that’s the eternal struggle of this show, right? How do you maintain your humanity after everything’s fallen apart? Is society still worth fighting for? I think there are certain characters who are going to oscillate in and out of those feelings throughout the run of the show. But the one thing I love about Aaron is that as dark as he’s gotten, as brutal as he’s gotten at times, he’s never given up on the idea of goodness and that society at large is worth fighting for. I think that’s always what I love most about that character, he just really believes in the goodness of people and wants to appeal to them in that way. We’ll see how that all shakes out for Aaron and the gang.

How was it having Robert Patrick join the fold in his dual role this episode? Is it fun to welcome new faces in every now and then?

I was so excited when I got word he would be doing it. I grew up watching Terminator 2, The X-Files, Copland, he’s such an incredible actor and I don’t think he gets enough credit for the nuance he brings to these menacing, dark characters. He puts such an interesting tone on every one of his characters and they’re all vastly different and extremely nuanced and he’s a brilliant actor and just a sweetheart of a guy. We were joking at the end of the episode, we gotta get a triplet for you. We gotta make sure you can come back and play with us again, even if it’s like a dream sequence or something. He was just awesome, a great guy to work with and I hope I get the chance to work with him again.

Season 11 has already started filming, what was it like getting back on set with everyone following a longer than usual hiatus?

It was bizarre shooting in October for the new episodes, but there were fewer of us, so it was bizarre but also tenable. Seeing the whole cast and crew together again — and it was pretty much everybody all at once — it was heartwarming and I think we all got a little teary-eyed because we’re seeing each other, we want to embrace each other, but we can’t. We’re still happy to do social distancing, which is very smart, but we’re around each other and it feels great to be back. But we’re still very aware of what’s going on in the world and so we’re on our best behavior, but it is a very different tone, I’d be lying if I said it wasn’t. Still, we’re all very grateful to be back telling these stories and grateful to be working, to be honest.

Is the mood different knowing that this is the beginning of the final season? We know it’s a two-year, almost two-season final season, but is that starting to creep in?

Yeah, I think it started to creep in even before we started filming. It’s a very bittersweet feeling. There was talk of having a 12th season, we didn’t know if it was going to go for 15, 20 even, there was talk it would go on for a long time, like The Simpsons. It is a very, very bittersweet ending but I think we’re all excited to tell the best stories we can for the last season and give it the polish and the respect it deserves on its way out.

It seems like The Walking Dead universe will still live on for years to come. Should Aaron make it out of the series finale alive, would you be down to continue playing him or pop up in any of the future projects?

Your guess is as good as mine for her fate, I have no idea when or if he’s going to die, but if he does make it through the season, I’d definitely love to keep playing him. It’s been the best opportunity I’ve ever had in my life, for sure.

In general, is there anything you can tease about Aaron’s journey in Season 11 or possible connection to the Commonwealth, which showrunner Angela Kang already confirmed will be explored.

Uh, I wish I could tease something but it would be completely conjecture at this point. They keep it very close to their chest, which I respect, for spoiler’s sake. I really don’t know anything about where the story’s going this year. I know we will, of course, be tackling the Commonwealth, but other than that, I have no idea!

We’re used to that answer from this cast.