Saving the planet is one way to get family therapy

You'd need an even harder heart than mine not to feel for Greta Thunberg's parents, opera singer Malena Ernman and her Abba-look dad, Svante Thunberg. In their book, Our House Is On Fire, they talk about the difficulties of raising Greta.

She was diagnosed with high-functioning Asperger's Syndrome – a kind of autism. What's more, she stopped eating. It must be hell to watch your child take two hours and 10 minutes to eat five gnocchi, which is not enough to sustain life. 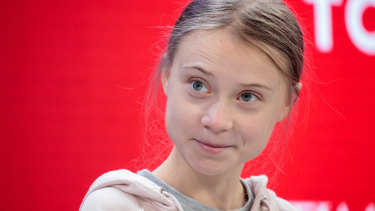 Greta Thunberg during a panel talk at Davos.Credit:Bloomberg

Greta was different and she was bullied. At school, she hid in the toilets to get away from the children being horrible to her.

But Greta worked out her own salvation. She watched a programme in school about plastic polluting the Pacific and it changed her. At breakfast, she declared to her mother, who had to fly to work in different countries: "You celebrities are basically to the environment what anti-immigrant politicians are to multicultural society." Her point was: "Nothing conveys success and prosperity better than luxury, abundance and travel."

So she started her school strike for the climate outside the Swedish PM's office and, through social media, it took off. Her mother writes: "Although more than anything we want her to drop the whole idea of going on strike from school, we support her. Because we see that she feels good as she draws up her plans. Better than ever before."

Then Ivan from Greenpeace offered Greta vegan noodles as she camped on the street. She took it. She was saved from self-starvation. And with countless teenagers around the world following her lead, her Asperger's wasn't just cured – it was validated.

A happy outcome, then, for her family. Her campaign for environmental austerity, which has taken her from the UN to Davos, trailing celebs in her wake, shows that the personal really is political.

Greta's teenage world view doesn't have room for complexity and that's not her fault. But grown-ups must make room. Dairy farmers would go out of business if we all become vegan. Blanket tree-planting would damage eco-diversity.

What the book makes you wonder is this: is the disruption caused by Greta's single-minded crusade to save the planet really a giant exercise in family therapy?