Mice plagues, such as the one ravaging parts of inland NSW, could become a thing of the past if scientists succeed in modifying the genes of the rodents so that populations crash before they can take off.

Paul Thomas, a researcher at the University of Adelaide, is part of an international consortium including the CSIRO and the US Department of Agriculture, studying how to safely alter genes to make female mice infertile. The techniques learned could potentially be applied to other damaging invasive mammals such as cats and foxes. 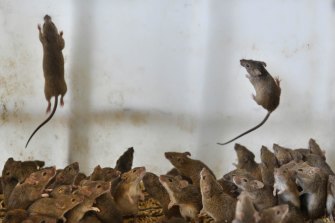 A mice plague has been devastating for parts of inland NSW.Credit:Dean Sewell

“There’s enormous upside potential if we can get it working,” Professor Thomas said. “The current mouse plague is quite devastating.”

The development of relatively low-cost CRISPR tools make it possible for researchers to alter the genomes of living organisms. Mice are particularly suited for such work because of the short time between generations of offspring and the fact key genetic engineering know-how is already in place, he said. 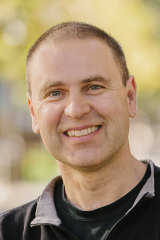 Paul Thomas, a professor at the University of Adelaide who is leading research into controlling mice using genetics.

The technology is designed to work in two phases, with the modified gene first spreading and then suppressing the mice population.

Individuals that carry the modification always pass it on and because, at least at first, only one of the parents has the altered gene, the offspring are fully fertile and so the alteration can spread.

“This results in all their female offspring being infertile, ultimately causing a population crash,” Professor Thomas said.

The plan is to model how the modification works in the laboratory before then testing it on a large caged group of mice. If approved, the next stage would be to test it in the wild on an offshore island uninhabited by humans.

“It’s a long way down the track” before genetically modified mice could be released on mainland Australia, he said.

Governments including NSW have been considering how similar so-called gene drives to accelerate a particular trait might be used one day to control other threatening invasive species such as feral cats.

“We will need an armoury of tools, including genetics and control measures, for conservation of ecosystems from invasive species,” Richard Kingsford, head of the University of NSW’s Centre for Ecosystem Science, said.

“One thing we know is that there are no silver bullets and we have to be cognisant that changing genetics can result in an arms race between natural adaptations and our efforts.”

Bill Sherwin, a UNSW geneticist, said every population or medical intervention had its pros and cons. In the case of so-called deleterious mutations on introduced mice, it would be important to ensure if possible the infertility trait was not passed on to endangered native mice species through mating.

“One of the main problems is whether it gets into the population of a related species,” Professor Sherwin said.

All research with genetically modified organisms (GMOs) in Australia requires appropriate approvals from the Commonwealth’s Office of Gene Technology Regulator before it can begin.

“This includes all stages of work with GMOs from early-stage laboratory research up to manufacture and commercial production,” a spokesman for the office said. “The release of any GMO into the Australian environment requires a licence from the regulator.”

Before such a licence is issued, the regulator will prepare a risk assessment and management plan based on advice from commonwealth and state governments, other experts, and after public consultation.

Our Morning Edition newsletter is a curated guide to the most important and interesting stories, analysis and insights. Get it delivered to your inbox.