Scott Morrison is used to surprising those who write him off

Scott Morrison is often characterised as “the accidental prime minister”, as if, somehow, he slipped into the job by mere chance.

Morrison, however, has long been known as a highly ambitious politician and by some, as a ruthless operator. 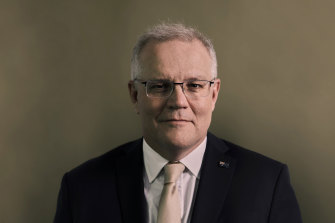 Few of his colleagues believe it was by accident that Morrison sideswiped fellow frontbencher Peter Dutton when the leadership became available in 2018 following the destabilisation of former prime minister Malcolm Turnbull.

Morrison, who only days before had famously thrown his arm around Turnbull and declared “this is my leader and I’m ambitious for him!”, was sworn in as Australia’s 30th prime minister on August 24, 2018.

If that was a surprise, almost no one in the commentariat imagined his Coalition could win the 2019 election, having trailed Labor in the polls for many months.

Morrison proved the commentariat to be wrong.

Capitalising on the personal unpopularity of Labor leader Bill Shorten, presenting himself as a “daggy dad” everyman and unleashing a campaign that characterised Labor’s economic policies as irresponsible and an attack on self-funded retirees, among others, Morrison led the Coalition to victory.

A Pentecostal Christian, he hailed the win as “a miracle”.

And here he is, in 2022, still the Prime Minister despite a long series of what his critics list as misjudgments, mistruths, missteps and sidesteps, facing another election that by most traditional measurements would place another victory out of his grasp. 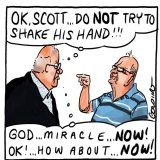 This time, however, the commentariat is more cautious about writing him off.

If Morrison himself is hoping for a sign, he will celebrate his 54th birthday on May 13 – a week and a day before the election itself on May 21.

More realistically, he must try to shrug off damaging personal denunciation of his style by some of his own colleagues and campaign on what are considered the Coalition’s traditional strengths: the economy and national security.

He will argue throughout the campaign that at a time of rising inflationary pressures, Australia cannot put at risk its post-pandemic rebound in economic and employment conditions. Morrison will point to an unemployment rate of 4 per cent and one of the best recoveries in the developed world from the pandemic as evidence voters should stick with him.

He will also point to national security achievements such as the AUKUS alliance (Australia, UK and US that will eventually deliver nuclear submarines) and Australia’s Indo-Pacific Quad partnership with India, Japan and the United States. 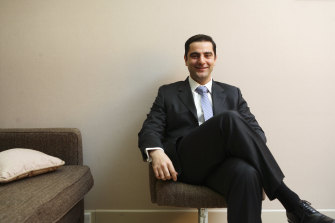 Michael Towke fell victim to a smear campaign after initially winning preselection for the seat of Cook.Credit:Jon Reid

Should he prevail, it will be a continuation of a political career cradled in massive political surprises.

Indeed, he began that career by losing preselection for the Sydney seat of Cook by 82 votes to 8 – and weeks later, seeing the result reversed. The initial winner, Michael Towke, soon fell victim to a smear campaign – later found to be false and defamatory – and famously, Morrison won a new preselection ballot.

After he entered parliament at the 2007 election, he was appointed to Malcolm Turnbull’s opposition frontbench as shadow minister for housing and local government in 2008. He has never been off the frontbench since.

When Tony Abbott’s Coalition won power in 2013, Morrison won a cabinet post as minister for immigration and border protection.

It became his springboard to power, making him one of the most high-profile of ministers when he launched Operation Sovereign Borders, a quasi-military exercise aimed at stopping asylum seekers arriving in Australia by boat.

In late 2015, new prime minister Malcolm Turnbull promoted Morrison to succeed Joe Hockey as treasurer, a position often considered a staging post for those ambitious to be prime minister.

Since becoming Prime Minister, however, Morrison has run into significant headwinds for taking a holiday in Hawaii during devastating bushfires, for how he has handled issues women have raised over the past year, and for the slow rollout of vaccinations as the COVID pandemic swept the nation.

He has also, however, displayed a relentless ability to radiate optimism and to present himself as an enthusiast about both the future of Australia and his own ability to lead it.

Now, the old jibe that it was all an accident is about to be put to its most critical test.