Secret messages from your favourite carols

We sing them in churches, chapels, streets and schools every year, wrap presents and decorate our Christmas trees to their accompaniment, know all the words by heart – but how much do we know about the stories behind them?

Here are just some of the histories and controversies, the secret political messages and famous names attached to the Top 10 Favourite Christmas Carols, as voted in a poll for the BBC's Songs of Praise programme. 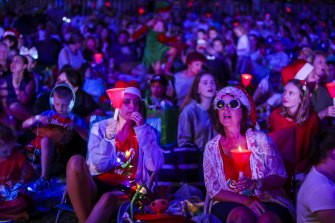 Carols in the Domain in Sydney.Credit:Anna Kucera

It's a rare carol that swaps cradles and shepherds for "Satan's tyranny" and "death's dark shadows", and perhaps that's the appeal of this wonderfully brooding, solemn hymn. There's no exuberant rejoicing in a 15th-century melody that may have originally been used as processional music for burial rites. The words, a colourful translation of a Latin antiphon, were written by 19th-century clergyman John Mason Neale, who also gave us Good King Wenceslas and Good Christian Men, Rejoice.

The most-published carol in North America, it is also perhaps the only one composed by a banker. The tune is often credited as Antioch by Handel, but while the eagle-eared may spot apparent quotes from both Lift Up Your Heads and Comfort Ye from the composer's Messiah, the tune is actually the work of Lowell Mason – a Handel enthusiast.

Another carol, another controversy. Published in 1884 as Luther's Crale Song, Away in a Manger is not, in fact, the work of Martin Luther – a myth that took more than 50 years to debunk. Printing the carol initially without a melody, the editors recommended that readers borrow the tune of Home! Sweet Home. But it was a lovely, lilting tune by William James Kirkpatrick, a Pennsylvania schoolmaster, that eventually stuck.

7. Once in Royal David's City

For many, Christmas begins at 3pm on Christmas Eve when a solo treble from King's Cambridge sings the first verse. But it wasn't ever thus. A more rousing opening carol – Up! Good Christen Folk – launched the first service of Nine Lessons and Carols in 1918. Only later was it replaced by Henry Gauntlett's gentler setting of words by Cecil Frances Alexander – the 19th-century vicar's wife who also gave us All Things Bright and Beautiful.

In 1865 the young Episcopalian pastor Philip Brooks travelled to the Holy Land and was so struck by a view that he wrote the words of this much-loved carol. While American congregations favour Brooks's collaborator Lewis Redner's more dramatic setting, in the UK we sing Ralph Vaughan Williams' simpler, sweeter tune Forest Green.

King John IV of Portugal and Saint Bonaventure are just two of the possible authors, Thomas Arne, Gluck and Handel just some of the composers linked to this most mysterious of carols. There's also a subversive sub-plot to a carol whose words took on special significance in England during the Jacobite rebellion, when they became a none-too-subtle plea for the "faithful" of France to invade and restore English Catholicism under Bonnie Prince Charlie.

There's no question about the famous composer of this carol. Felix Mendelssohn wrote the rousing tune, though might have been surprised to find it performed at Christmas. He originally composed it as part of a cantata celebrating the 400th anniversary of the printing press, specifically stipulating that his "soldierlike" melody should never be used for religious text. Fortunately for us, Charles Wesley, brother of Methodist founder John, ignored the edict, giving us this joyful classic.

3. In the Bleak Midwinter

Holst or Darke? Forget turkey or goose, this is the all-important Christmas question. Christina Rossetti's delicate verse has inspired many settings, but those by 20th- century British composers Harold Darke and Gustav Holst are miles ahead of the pack. Holst's is a proper congregational carol. Simpler than Darke's, it's also more sombre, a sense of melancholy, of yearning, running through its harmonies. Darke's carol is more rhapsodic, its melody soaring and tumbling in musical ecstasy.

Legend has it that, just before Christmas 1818, mice chewed through vital sections of the organ of St Nikola's Church in Oberndorf, Austria. The priest and the schoolmaster composed a carol for just voices and guitar, and so saved Christmas. This is almost certainly fiction, but its miraculous charge was further enhanced by its role in the 1914 Christmas Truce, when German and Allied soldiers sang it from opposing trenches.

If this luscious French melody sounds more like an aria than a carol, that's because it's the work of Adolphe Adam – a prolific 19th-century opera composer who also wrote the ballet Giselle. Initially popular in France, the carol fell out of favour after its 1847 premiere, when Adam's Judaism and poet Placide Cappeau's socialism worried the Church so much that they banned performances. We have America to thank for its reputation. In 1855, John Dwight, a Unitarian minister, translated the carol into English, bringing its powerful text and soaring melody to a new audience.

Here are some lesser-known carols that deserve to be on any Christmas list:

The magic of Elizabeth Poston's 1967 carol is its miraculous simplicity. The music fans outwards from a single treble line into four-part harmony – a musical seed swelling into full bloom, mirroring the imagery of this lovely 18th century poem.

It's hard to believe that such exquisite beauty could emerge from so pragmatic a scenario. Broke and needing funds for a festive booze-up, Peter Warlock and Bruce Blunt composed what they hoped would be a money-spinning carol while on a pub crawl. They achieved their aim.

Neglected in the UK with a translation that shackles its ravishing melody to the words "Whence is that goodly fragrance flowing?" The French 17th-century tune was so popular in its day that John Gay pinched it for his hit The Beggar's Opera.

Commissioned in 2015, Richard Causton's carol brings the Christmas story into the present with words by poet George Szirtes. Its verses batter, as the refrain breaks your heart.

Of the Father's Heart Begotten

With words dating from 350 AD and a plainchant melody from the 16th century, this glorious Advent hymn is almost as ancient as Christmas itself, "Evermore and evermore", stirring the heart every time you hear it.