He’s traveled thousands of miles from home, trekking through some of the world’s roughest and most dangerous territory in search of a new life. But when Shahab Shahbazi finally crossed the U.S. border and asked for asylum, he discovered his journey was far from over.

We first met Shahab in the spring of 2017 as he, along with a small group of other migrants and the smugglers guiding them, hiked through the Darién Gap, an unforgiving swath of jungle straddling the border between Colombia and Panama.

Shahab said he had fled his homeland, Iran, after being beaten and jailed for converting from Islam to Christianity. After a stay in Venezuela, he was determined to reach the United States.

“I got to go. I need life. I need more life,” he told CBS News’ Adam Yamaguchi of his quest, which was chronicled last year in the CBSN Originals documentary The Darién Gap: A Desperate Journey to America.

At that point he still had over 2,000 miles to go and seven more borders to cross. Many don’t make it. But Shahab survived the grueling journey. When Yamaguchi caught up with him again two months later in Tijuana, Mexico, he said faith had gotten him through.

“God helped me. Jesus Christ helped me. It’s very good. Thanks to God,” he said. 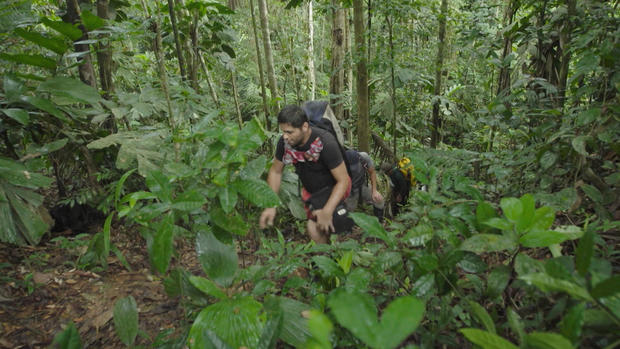 Shahab Shahbazi in the jungle of the Darién Gap in the spring of 2017, part of his arduous journey to the U.S.

As Shahab approached the U.S. border crossing and asked officers for entry into the country on humanitarian grounds, he joined a growing number of migrants seeking asylum in the United States. Unlike other immigrants who may want to move to the U.S. for jobs or personal reasons, those seeking asylum come here in fear for their lives.

America grants asylum protection to those who can prove that they fled their countries based on a credible fear of persecution based on race, religion, nationality, political opinion, or membership in a particular social group.

For Shahab, that was religious persecution as a Christian in Iran. For many others, including members of a group that made headlines this spring in a “caravan” heading for the border, the threat is rampant violence in Central American nations like El Salvador and Honduras.

“Seeking asylum is not a privilege, it’s a right,” said Luís Mancheno, an immigration lawyer with The Bronx Defenders in New York. “Every single human being in the world has that right. People think it’s a gift. It’s not. It’s an obligation.”

That obligation is laid out in federal law as well as United Nations agreements signed by the U.S. and more than 140 other nations on the treatment of refugees.

Mancheno has a personal connection to the asylum process. In 2009, he was attacked for being gay in his home country of Ecuador. He sought asylum in the U.S., and is now an American citizen.

Yamaguchi asked him about the process — and the perception that some people try to take advantage of it.

A.Y.: “When we were trudging through the jungle a number of people said the U.S. was the place to seek asylum because it was easier and you’d be entitled to more. If we make it too easy or too appealing, we’re just gonna attract more and more people who may not necessarily need to be in the U.S.”

L.M.: “If I would make you speak to any of my clients who are seeking asylum here the last thing they would say that it’s easy. It’s a very long and complicated process.”

A.Y.: “So you wrote here recently in this essay, Don’t come here if you have no place to go. Don’t pick this country, it is not safe for you anymore. For somebody who came here and found refuge, to write this message ostensibly to other asylum seekers, is pretty powerful.”

L.M.: “It’s me screaming for help, in desperation. I think that I’m also trying to inform the people, my fellow asylum seekers coming to the U.S., that it is not as easy, not as great as people paint.”

Shahab spent six months in immigration detention after he asked for asylum. That’s a routine procedure while the government investigates an asylum seeker’s claims of fear of persecution.

The number of these “credible fear” screenings, as they’re called, increased from about 5,000 a decade ago to over 95,000 in 2016, according to DHS.* The surge has led to overcrowding in detention facilities and a massive backlog in the system. The process can drag on for years, with a growing number of asylum seekers being released into the community while their cases are still pending.

By March of 2018, Shahab was living in San Diego and feeling deeply discouraged.

“Before, I’m thinking America is very, very perfect. But right now I’m looking — not perfect. I’m nervous because I don’t know. I don’t know nothing about my future,” he said. 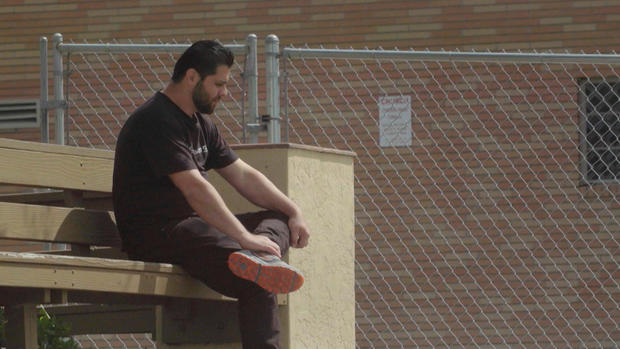 Shahab Shahbazi says he left Iran to escape persecution after converting from Islam to Christianity.

He is required to check in with Immigration and Customs Enforcement (ICE) officials every two weeks. And for the time being, he does not have permission to work. Without any income or family, he gets by with help from fellow asylum seekers he met in detention and the occasional kindness of strangers. A friend of a friend lets him sleep on his couch.

“I feel very poor because I need job,” he said. He thought he might get some help from the government, “but nothing, nothing.”

Is he happy he came?

Luís Mancheno understands. “It’s not easy to leave your home, to leave  your family, to leave your community, to leave your language,” he said. Desperate migrants “have no real understanding of what our asylum laws are, but all they know is that if they don’t come  to the U.S., their lives will end.”

In detention, Shahab met Reza Kavali, an asylum seeker from Afghanistan who’s fighting a deportation order from 2017. Reza is hoping to get the immigration court to recognize his recent marriage to an American woman named Christina and let him stay.

Like all those released from detention, he’s required to wear ankle bracelets equipped with GPS trackers. The devices blare loud alerts if he forgets to change the batteries every eight hours, which Reza considers worse than being in jail because people “look at you [like] you are criminal.” He tries to avoid leaving the apartment except to attend English classes nearby.

“I want to live this country so I have to speak English. Yeah. I have to learn it,” he said. 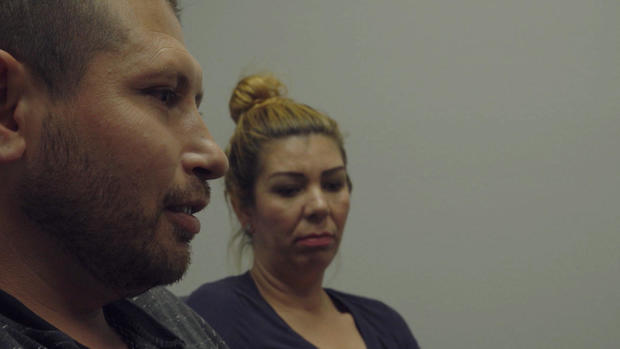 Reza Kavali fled Afghanistan and met his wife Christina in the U.S.

He and Shahab swap insights into the sometimes inscrutable asylum process. Asylum seekers are not legally entitled to an attorney, and lacking money or resources, a majority end up facing the immigration judge and government lawyer alone. Fewer than 4 percent of those without attorneys win their case, compared to a 70 percent success rate for those with a lawyer.

The burden is on asylum seekers to prove they’d face genuine peril if they were sent back.

Reza and Shahab’s cases are just two among roughly 700,000 asylum claims that are currently in the backlog nationwide, and more people are arriving every day. Some are held up for weeks at the border; immigration officials say facilities are stretched beyond capacity.

When the migrant caravan arrived in April amid a swirl of media attention and political debate, several hundred people — including many children — took shelter in bare-bones conditions, sleeping on the floor and seeking guidance on their next steps. 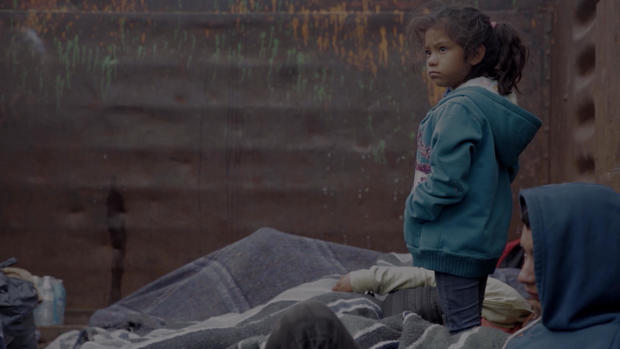 The caravan of migrants in Tijuana included many children.

“The first thing that the person does, he says, ‘I am here in the U.S., I am not in my country of origin, and I am afraid of going back to my home country because I’m being persecuted,” Mancheno explained.

A few weeks ahead of his next court date, Shahab has managed to secure a lawyer free of charge and is feeling better about his prospects.

Over a dinner of take-out enchiladas, Yamaguchi raised a difficult question. “You were in jail for six months. You had security, you had food, you had medical care. American taxpayers, who work and pay taxes, that’s our money paying for your services. So a lot of people say, ‘Just go home. Why do I have to pay for you?'”

“Today you help me, tomorrow I help in another way,” Shahab replied. “Another tomorrow, helping other ways, you know? So if you’re feeling you’re human, you have to help everybody.”

“So you think you can help America?”

Yet when asked if he’d advise would-be migrants in Tijuana to follow in his footsteps and seek asylum in the U.S., he hesitates.

“I don’t know. It’s so hard. Not easy,” he said. “But America has very good security for people. America is good.”

Many groups in communities around the country offer humanitarian assistance, educational resources, and legal aid to asylum seekers. Here are a few:

To see how Shahab’s story began, watch the CBSN Originals documentary The Darién Gap: A Desperate Journey to America in the video player below: