Shoppers have blasted lingerie brand Victoria’s Secret over its apparent recent attempts to show more diversity with both its products and the models it employs.

Last week, the lingerie giant, famous for its flamboyant annual runway shows, appeared to be changing gear, posting photos on its Instagram account that promote neutral underwear in a variety of skin tones and using models from different ethnic backgrounds and showing size diversity.

However, some lingerie fans said the company’s bid to finally become more diverse was ‘too little, too late’ and accused the brand of ‘playing catch-up’.

Victoria’s Secret has faced an ongoing backlash over its lack of diversity with television star Jameela Jamil once branding it a ‘transphobic, fat phobic company that sets out to exclude most women’. 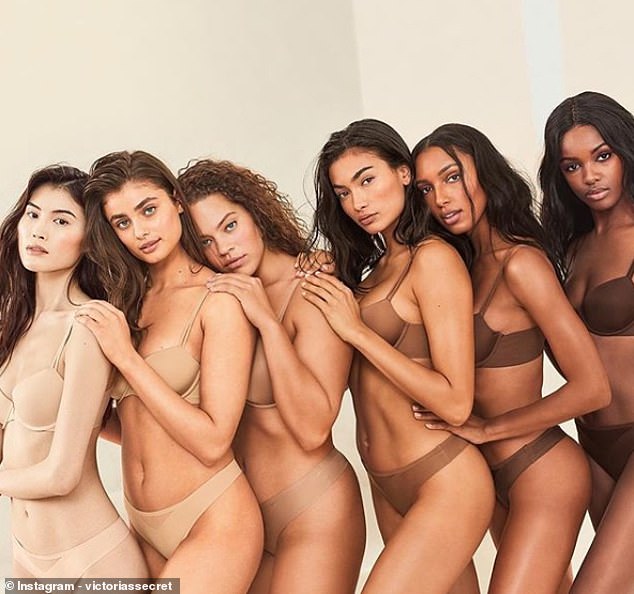 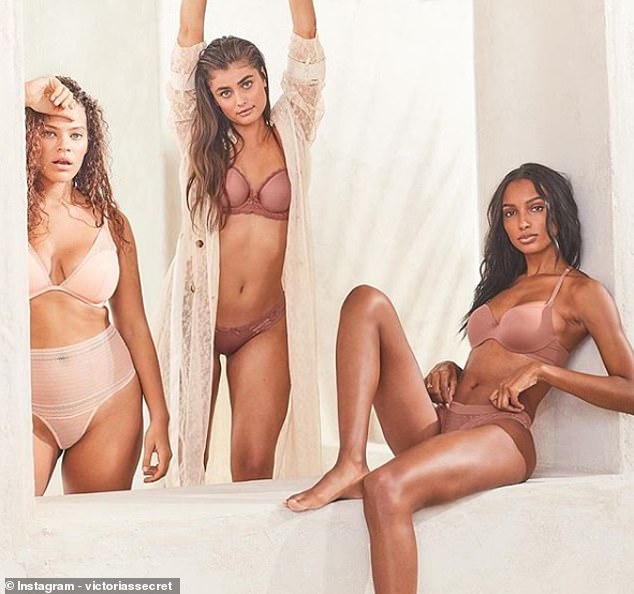 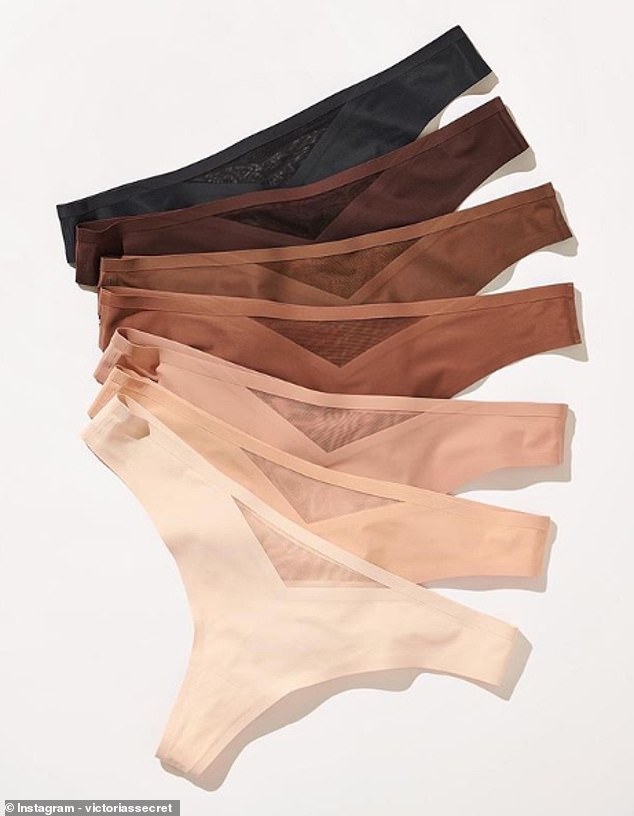 Declining sales figures, shop closures and the cancelling of its high-profile catwalk showcase – amid rumours of trying to create a more ‘evolved message’ – have added to the company’s woes in recent years.

The brand has tried to shake off its image as being outdated and out of touch by hiring a more diverse cast of models, including transgender beauty Valentina Sampaio.

The retailer has been facing stiff competition from newer lingerie brands with more inclusive marketing strategies aimed at women of all shapes, sizes, and skin tones.

However, its latest efforts to appear diverse seem to have been given short shrift on social media.

Cora Harrington, who uses the @lingerie_addict Twitter handle, is amongst those who have criticised the brand’s more recent posts and tone change, writing: ‘All of a sudden, Victoria’s Secret is interested in featuring larger size models and nude bras for all skintones.’

@LaBeautyologist responded: ‘It’s really so mind blowing to see a once industry leader playing catch up like this.’ 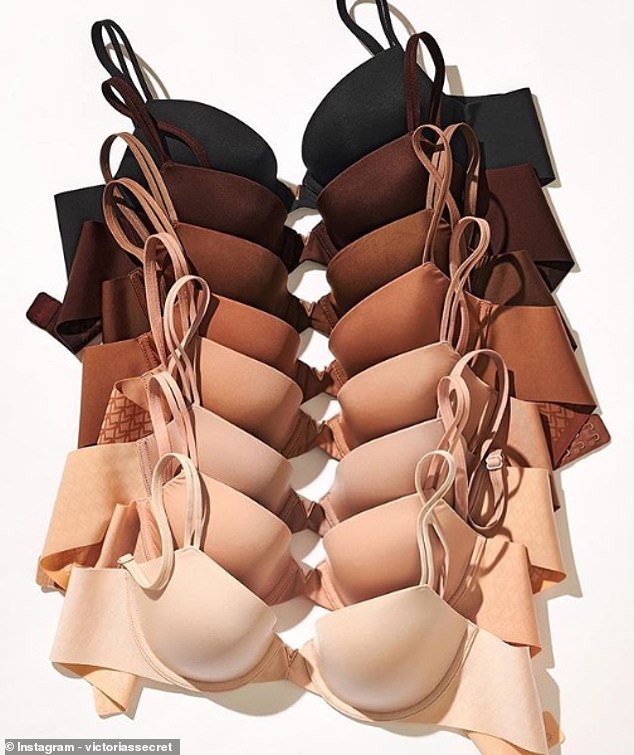 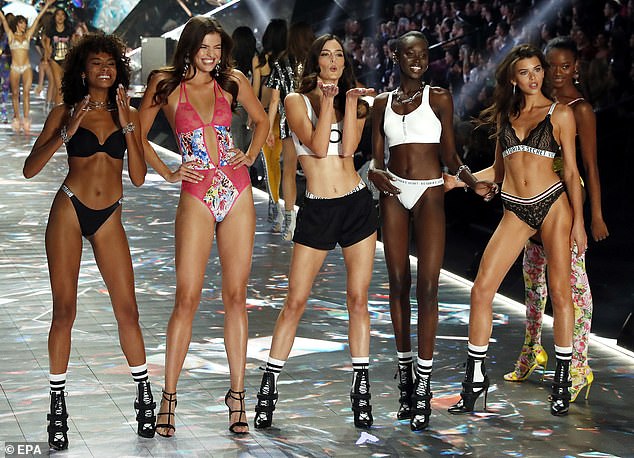 End of an era: The Victoria’s Secret Fashion Show, pictured in 2018, was cancelled for the first time in 23 years after plummeting ratings and years of backlash over its lack of diversity

Famous faces: The show has featured some of the world’s most in-demand models over the years, including Bella Hadid in New York in 2018 (left) and Heidi Klum in Miami in 2008 (right) 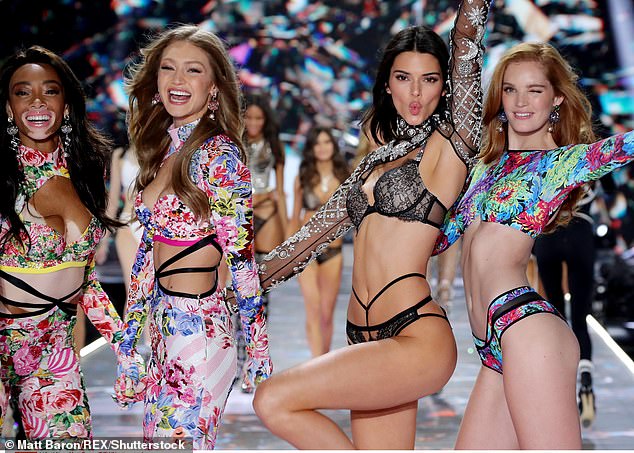 Last one? The decision was part of a move to ‘evolve the messaging of [the company]’. The last VS Fashion Show, featured (l-R) Winnie Harlow, Gigi Hadid, Kendall Jenner and Alexina Graham

Beginning: The first Victoria’s Secret Fashion Show was held at the Plaza Hotel in New York City in 1995 with models such as Angelika Kallio (left) and Leilani (right) walking the runway

Victoria’s Secret has declined to comment on the social media reaction.

The lingerie giant’s parent company, L Brands, confirmed in November that its famous show wouldn’t take place. The decision was part of a move to ‘evolve the messaging of [the company],’ Fortune reported at the time, indicating that the flamboyant event is well on its way to becoming a relic of the past in today’s #MeToo era. It comes a year after marketing chief Ed Razek saying that the brand would not cast plus-sized or ‘transexual’ models because the show is a ‘fantasy.’

He was rounded on by celebrities such as Halsey, who wrote on Instagram that she had ‘no tolerance for a lack of inclusivity’, just days after performing at the Victoria’s Secret show.

The brand has also come under criticism from Jameela Jamil, who accused the company of being a ‘transphobic, fat phobic company that sets out to exclude most women’, during a Twitter spat with model Sara Sampaio.

The brand has also come under fire for its lack of size diversity, with curvy model Iskra Lawrence among the outspoken critics.

Iskra shared an Instagram video of herself in a bikini in December last year alongside a caption that read: ‘That cellulite, those rolls are cute, that jiggle is sexy and everybody deserves to feel confident in the skin they’re in.’

She captioned the photos #BeautyBeyondSize. 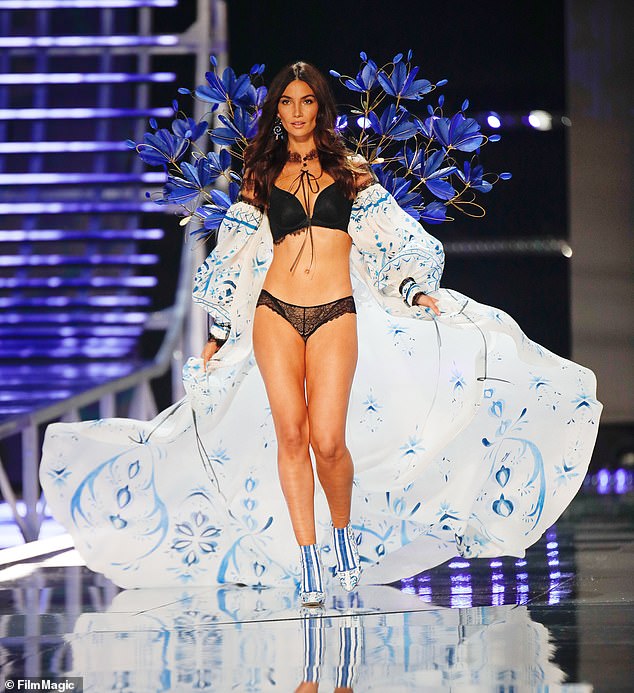 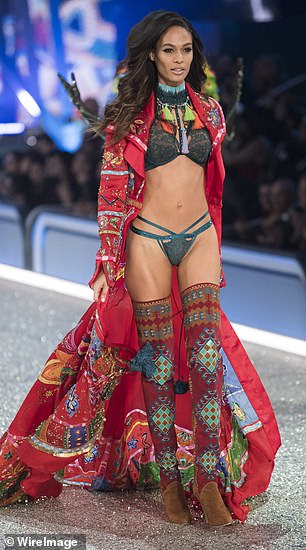 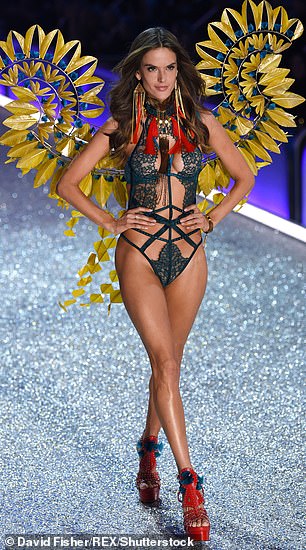 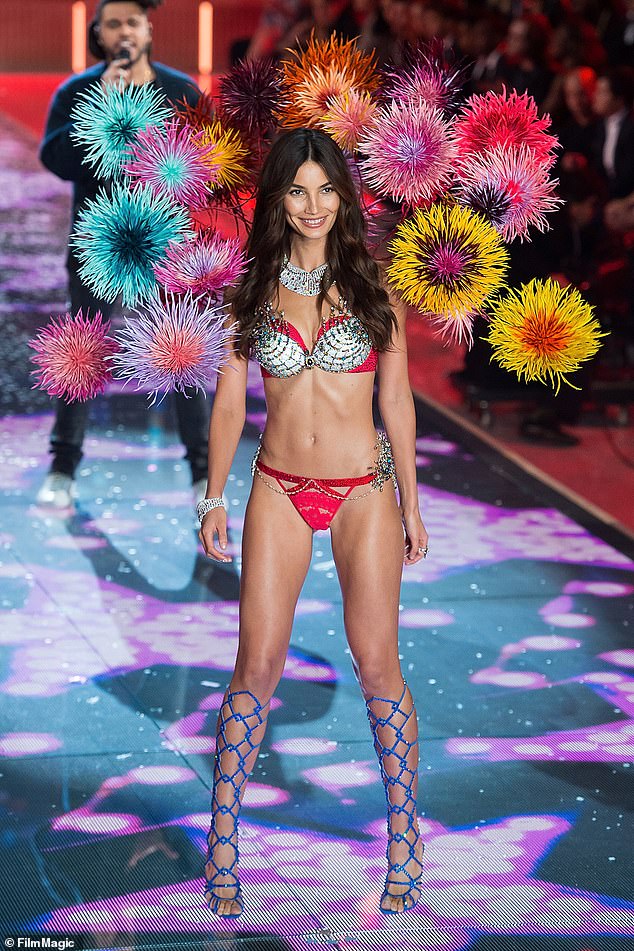 Spilling the beans: Parent company L Brands confirmed during an earnings call on Thursday that the show has been canceled following months of rumors. Pictured: Lily Aldridge in 2015 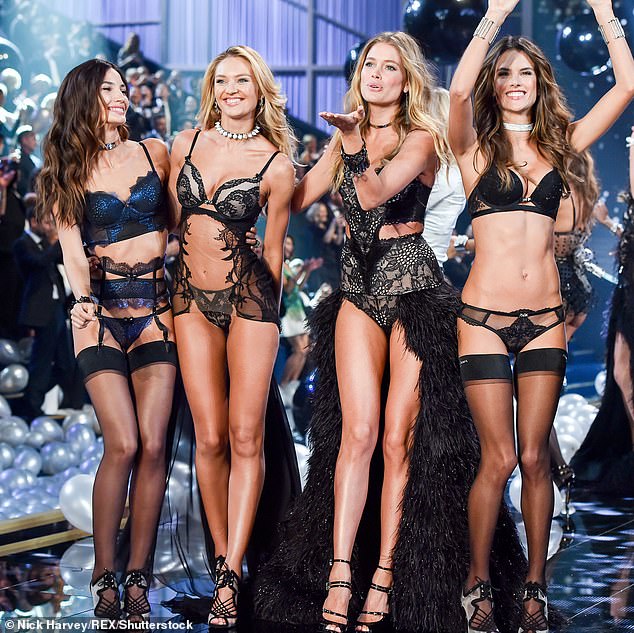 There they go: Lily Aldridge, Candice Swanepoel, Doutzen Kroes and Alessandra Ambrosio on the catwalk Victoria’s Secret Fashion Show in London in 2014 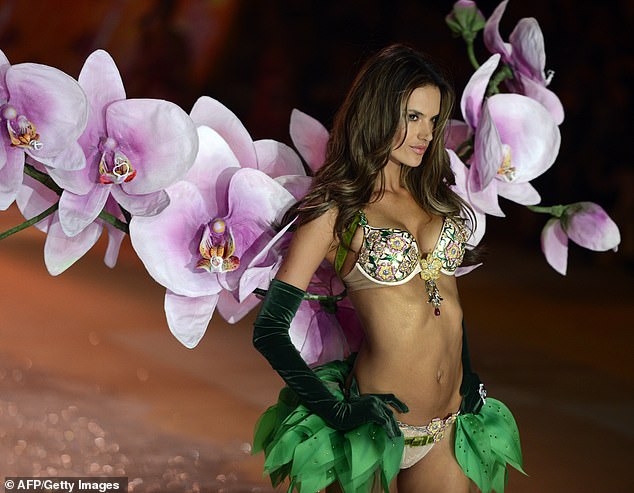 As well as a shift in public perception of the Victoria’s Secret Fashion Show, the brand is facing a continued decline in sales.

Sales have dropped seven per cent in the latest quarter compared to a two per cent fall during the same period last year, according to Fortune.

Aside from a small rise in the first quarter in 2018, the lingerie retailer has had falling sales every quarter since the fourth quarter in 2016.

It has previously been announced that as many as 53 Victoria Secret stores across the US could close by the end 2019.

Rumors that the Victoria’s Secret Fashion Show would be canned have been circulating for months, with Shaik letting it slip in July that it was canceled.

‘Unfortunately, the Victoria’s Secret show won’t be happening this year,’ said the 28-year-old model, who has walked in the show five times since 2011. 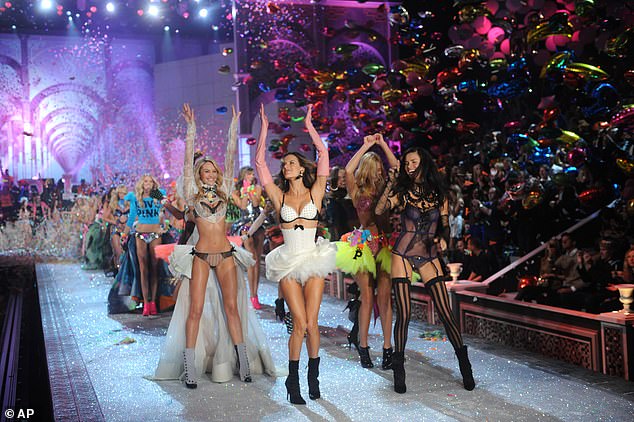 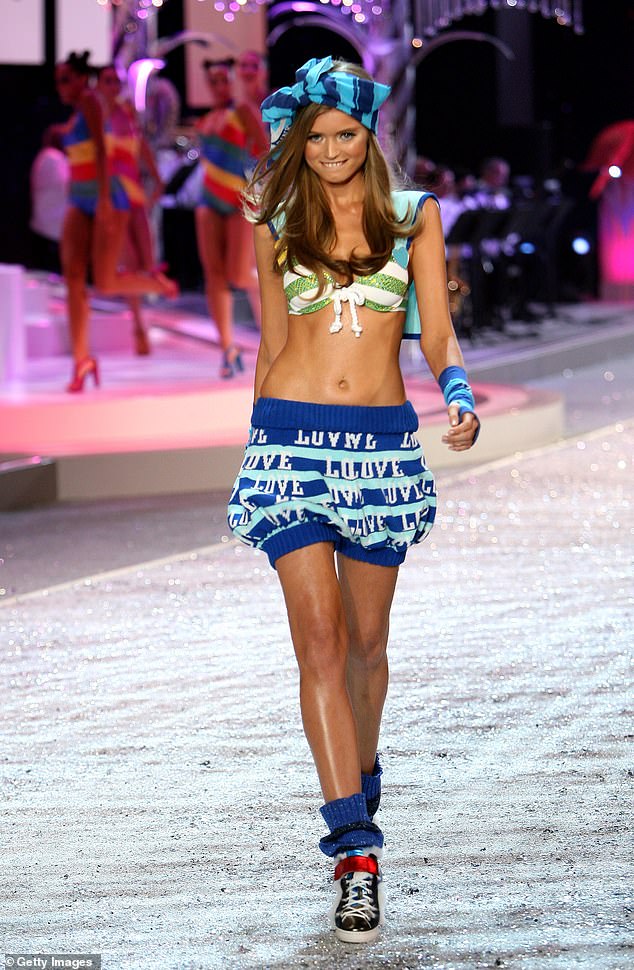 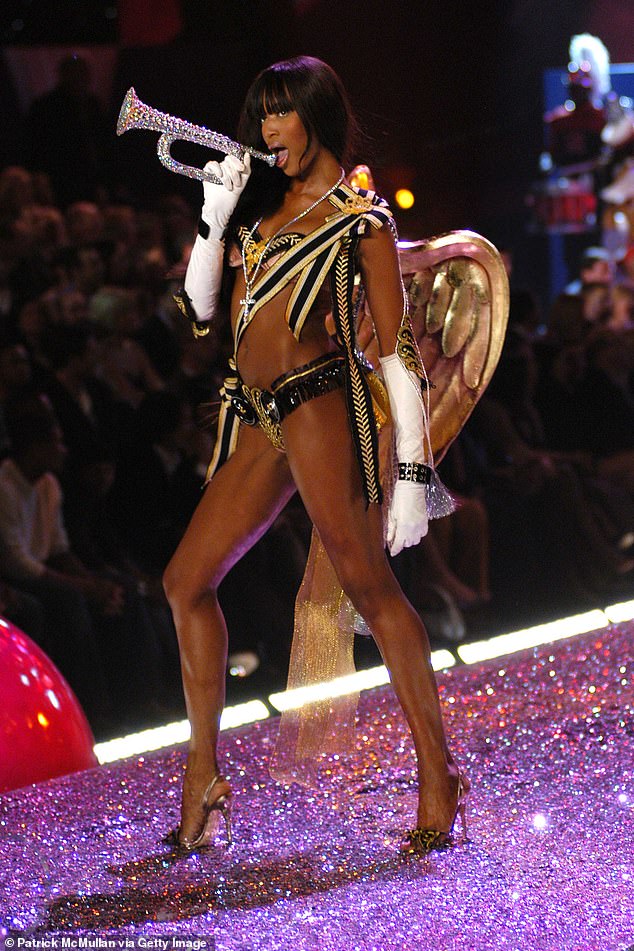 ‘It’s something I’m not used to because every year around this time I’m training like an Angel,’ she told The Daily Telegraph.

‘But I’m sure in the future something will happen which I’m pretty sure about,’ she added optimistically. ‘I’m sure they’re trying to work on branding and new ways to do the show because it’s the best show in the world.’

The first Victoria’s Secret Fashion Show was held at the Plaza Hotel in New York City in 1995, and over the past 23 years, it has featured some of the world’s most in-demand models, including Stephanie Seymour, Naomi Campbell, Kendall Jenner, and sisters Gigi and Bella Hadid.

However, interest in fashion extravaganza has waned in recent years.

TV ratings for the annual Victoria Secret Fashion Show fell to a historic low of just 3.3 million in 2018, down from a high of more than 10 million viewers in 2011, according to a February 13 report from CNBC. 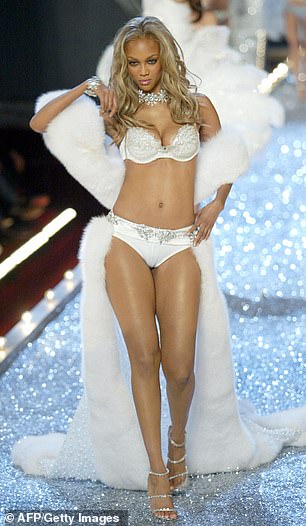 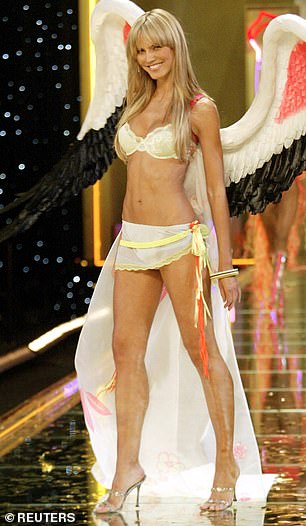 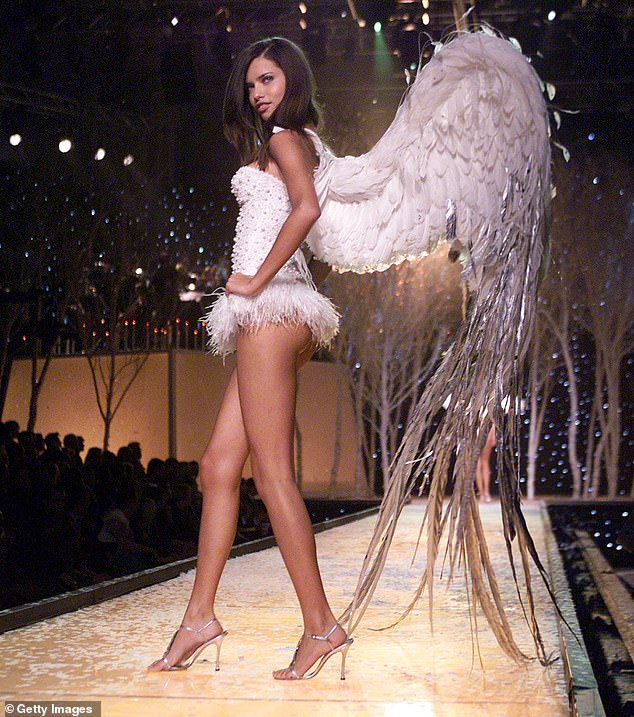 Throwback: Adriana Lima on the catwalk at the VS Fashion Show 2001 in New York 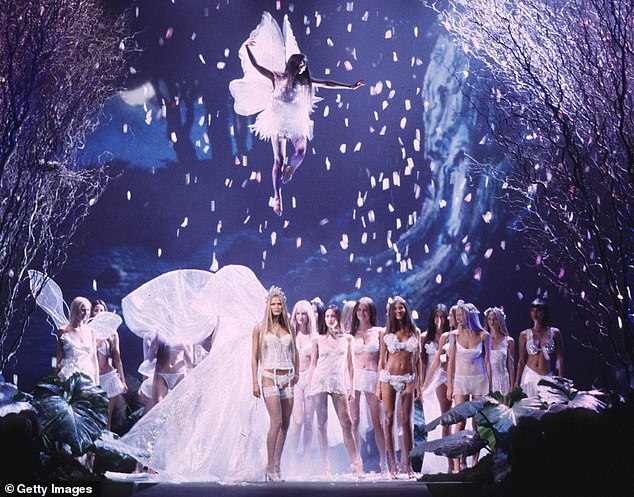 Victoria’s Secret Angels at the finale of the 1999 Fashion Show at Cipriani, New York City 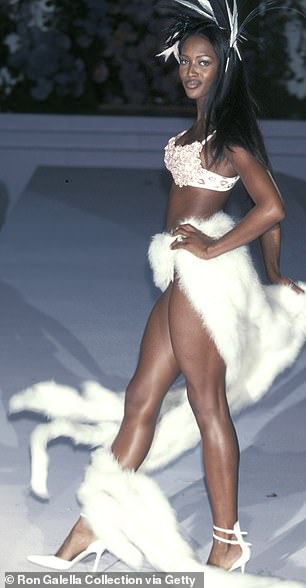 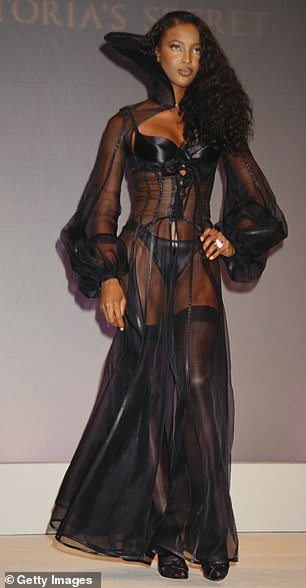 Long-time favorite: Naomi Campbell on the Victoria’s Secret catwalk in New York in 1998 (left) and 1997