Coal and gas won't play any part in Australia's future prosperity, Labor's energy spokesman Mark Butler has declared in a speech that threatens to stoke growing divisions within the opposition over climate policy.

Mr Butler said it was "depressing" and "short-sighted" to think the continued use of fossil fuels was "what makes Australia great" and said current government policy failed to reflect their true cost on the nation's health and wellbeing. 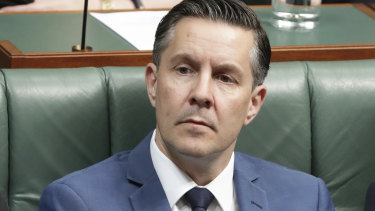 Mark Butler said it was “short-sighted” to think the continued use of fossil fuels was “what makes Australia great”.Credit:Alex Ellinghausen

His comments follow the Morrison government’s pledge to open up new gas supplies and back the construction of a gas-fired power station in a mammoth new plan that aims to prevent an energy price spike for employers and households.

Mr Butler, a close ally of Labor leader Anthony Albanese, likened coal and gas to the gold and "sheep rush" of the 19th century which had provided "the first building blocks for modern Australia".

"We found ourselves with plentiful coal and gas in the 20th century, making us one of the most prosperous societies in human history on the back of these fossil fuels," he said in a statement provided to the Carbon Market Institute virtual conference on Wednesday.

"Now, 20 years into the 21st century, we know that coal and gas won't underpin continued prosperity, whether for Australia or the rest of the world.

"In fact, we know that these fuels come with a huge cost that to this day isn't reflected in their price or in government policy.

"The cost is the impact that these fuels have on our climate, and by extension on our health, our security, our safety and of course our continued prosperity."

The Australian Workers' Union, an influential voice within Labor's Right faction, has upped its campaign in recent months to ensure gas plays a pivotal role in Australia's post-pandemic recovery and in future energy needs.

In a submission to the federal government in May, AWU national secretary Daniel Walton said federal and state leaders must be prepared to make sweeping changes to Australia's gas policy in order to maximise job creation and boost manufacturing capacity.

Labor is involved in a growing policy tussle over whether to support future gas production, with some MPs breaking with the ALP's grassroots environmental movement, known as LEAN, by supporting the development of new gas fields and the construction of new gas-fired power stations.

It is also split on whether it should update its climate targets ahead of the next election from 2019 when it would cut emissions by 45 per cent by 2030 on 2005 levels.

Outspoken resources spokesman Joel Fitzgibbon has faced internal criticism for advocating Labor be more vocal in its support for gas development and support of the coal industry.

Mr Butler said backing a move away from fossil fuels was not a "left-wing idea" nor a "political idea", and outside of politics was not controversial.

"Some cling to these fuels as if a future where their use winds down and eventually ends is also a world where our shared prosperity ends," he said.

"That is a depressing and short-sighted way to look at what makes Australia great, and I'm sure it is fundamentally incorrect."

Mr Fitzgibbon told Sky News Australia on Sunday that Mr Butler understood Australia needed to "get more gas out of the ground".

"He does know that gas by necessity will continue to play a role in our electricity generation system for a long time to come," he said.

"I think he has a slightly different view about whether gas can compete in the market but that's for the people who are making the investment decisions to decide. There's not much we disagree on."