Sigma male archetype akin to the alpha is mocked online

What IS the ‘sigma male’? Term to describe male archetype akin to the alpha is mocked online – as people brand it the ‘hipster version’ of the pack leader

People are mocking a resurfaced classification of men known as the ‘sigma male’ — a ‘lone wolf’ type that is equal to the alpha in the oppressive male hierarchy.

Twitter user @LilySimpson1312 thrust the lesser-known term into the spotlight this week when they shared photos of socio-sexual hierarchy charts, a video about how ‘to become’ a sigma male, and the self-help book ‘The Sigma Male.’

‘What the f**k is going on with men,’ they captioned the viral post, which has been retweeted more than 25,000 times, prompting critics to tear apart the term and the alpha/beta mythology as a whole. 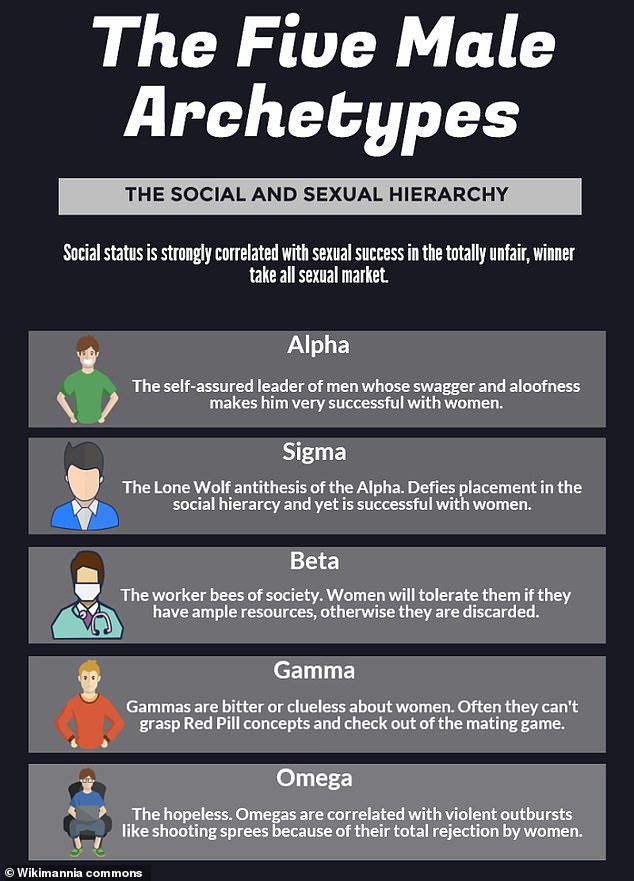 Hitting the main stream: The ‘sigma male’ has been thrust into the spotlight this week, with people mocking the description of the ‘lone wolf’ archetype

The characterization of men into two groups, the dominant alpha and the submissive beta, has been around for decades. The idea was derived from the now-debunked theory that wolf packs are ruled by aggressive leaders know as alphas.

The limiting system ranks men based on their social position with other males and their ability to attract women. The alphas and sigmas are considered equal as top dogs, with the latter being seen as someone who sits outside the hierarchy by choice.

Day, who has been described as a white supremacist and misogynist, among other things, considers himself to be a sigma male.

In a blog post from 2010, he wrote that sigmas are ‘outsiders who don’t play the social game and manage to win at it anyhow.’ 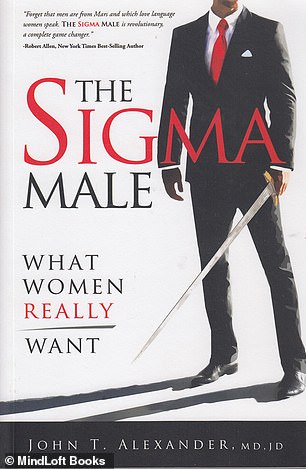 ‘The alphas hate sigmas because they are the only men who don’t accept or at least acknowledge their social dominance,’ he added. ‘Everyone else is vaguely confused by them.

‘At the party, it’s the guy who stops by to say hello to a few friends accompanied by a tier one girl that no one has ever seen before.

‘Sigmas often like women, but also tend to be contemptuous of them.’

Day’s hierarchy theories are most popular with incels, men’s rights activists, and pickup artists, though the idea of the sigma male was lesser known compared to the alpha and beta archetypes.

Plastic surgeon John T. Alexander sought to build on the idea with his 2014 marital self-help book ‘The Sigma Male: What Women Really Want.’

More recently, talk of the sigma male has been popping up on Twitter, Instagram, and even TikTok. 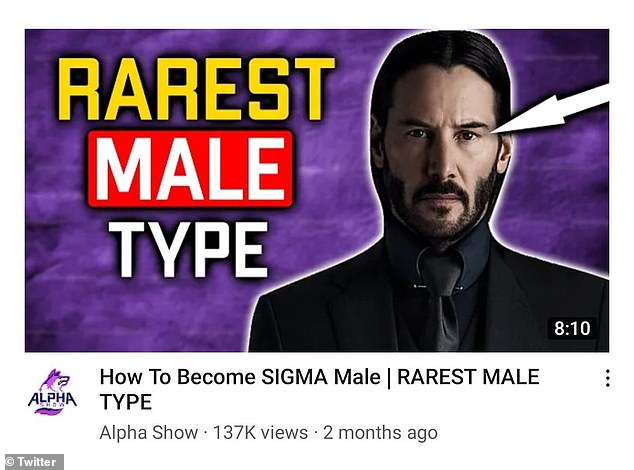 Archetype: Keanu Reeves’s character in the 2014 action film John Wick is said to be an example of a sigma male 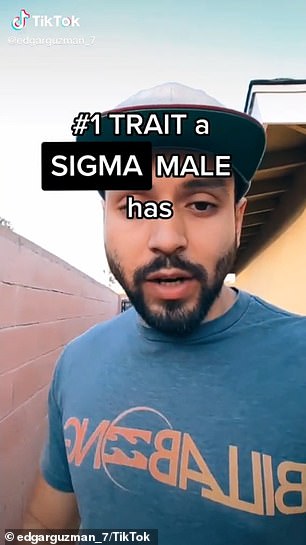 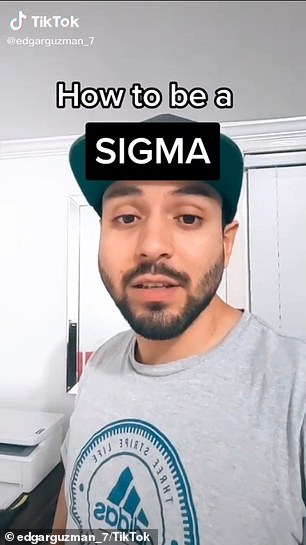 Platform: Edgar Guzman, who claims to ‘help men find their Purpose and with Self Improvement,’ references the sigma male in a number of his TikTok videos

TikTok user Edgar Guzman, who claims to ‘help men find their Purpose and with Self Improvement,’ has described the characteristics of a sigma male in a number of his videos.

‘Here is the number one trait a sigma male has: He seeks no approval. Absolutely no approval,’ he says in one. ‘He’s a leader of his life only. Once you start getting into that follower sheep heard mentality, you lose, bro.’

The increasing use of the term has led to more people making fun of it, particularly on Twitter following Simpson’s viral tweet.

‘The Sigma Male idea is stupid, pseudoscientific and reveals the flexibility of the pick-up artist grift, telling clients that they’re basically John Wick because they have commitment issues, but can also explain away their own failings to meet ‘alpha’ standards,’ one man tweeted this week. 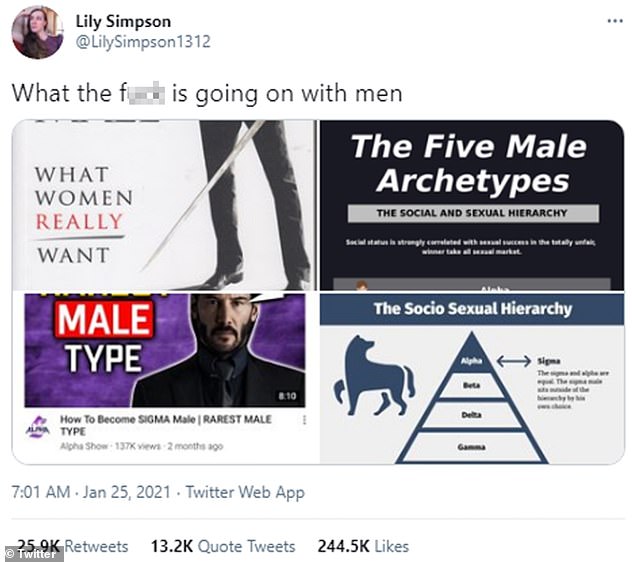 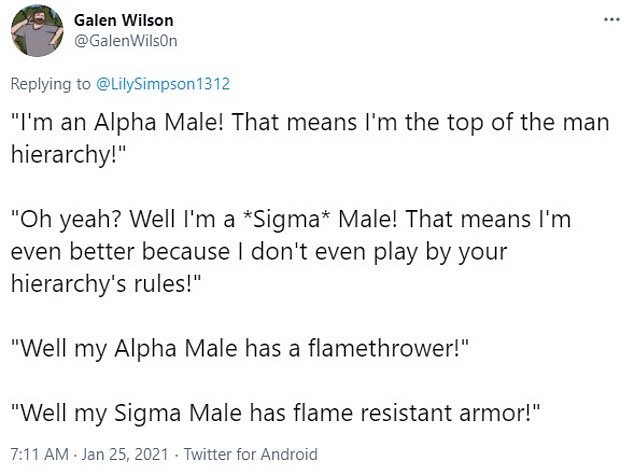 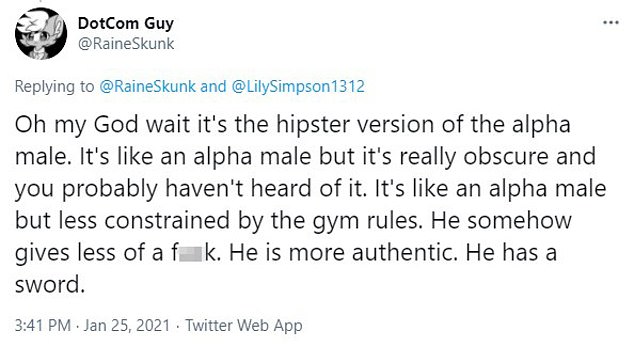 Hitting back:” Twitter users have been slamming the archetype online, calling it ‘stupid,’ ‘pseudoscientific,’ and the ‘hipster version’ of the alpha

‘All this because somebody misread a book from the 70’s about wolves peeing on each other,’ someone else commented.

‘Men: “astrology is fake” Also men: “I’m a sigma beta epsilon male, it’s like the rarest type of male, you probably haven’t heard of it,’ another joked.

Some claimed the sigma male is just the ‘hipster version’ of the alpha.

‘Oh my God wait it’s the hipster version of the alpha male. It’s like an alpha male but it’s really obscure and you probably haven’t heard of it,’ one Twitter use wrote.

‘It’s like an alpha male but less constrained by the gym rules. He somehow gives less of a f**k. He is more authentic. He has a sword.’ 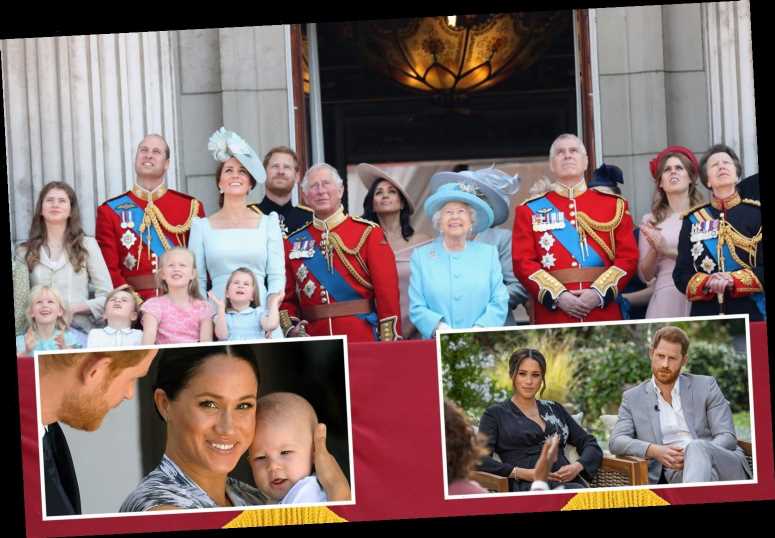