Social media users are convinced Meghan has a British accent

Meghan Markle and Prince Harry haven’t even been married two months yet, but the Duchess of Sussex is so comfortable with her new life, it appears as though she may have already adopted a British accent.

Twitter user Aya El Zeiny shared a video of Meghan, 36, greeting fans at her first big solo engagement with Queen Elizabeth II in Cheshire, England, last month, and the resurfaced footage has people buzzing about the change in the Los Angeles native’s accent.

‘We all had a great day, I think,’ Meghan said in the clip, after a woman gushed that she looked ‘gorgeous’ on her wedding day in May. ‘The sun was shining for us.’ 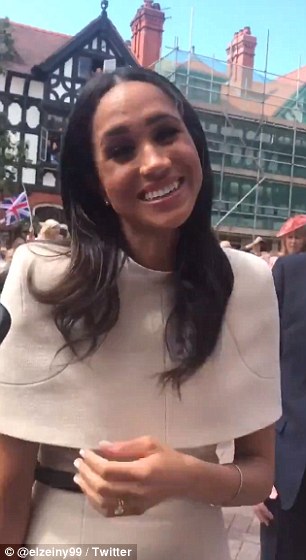 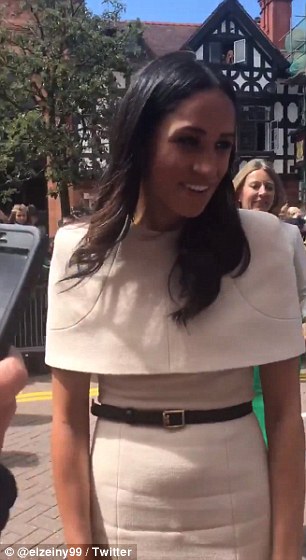 Say what? People are debating whether Meghan Markle is speaking with a British accent after a Twitter user shared a video of her greeting fans in in Cheshire, England, last month 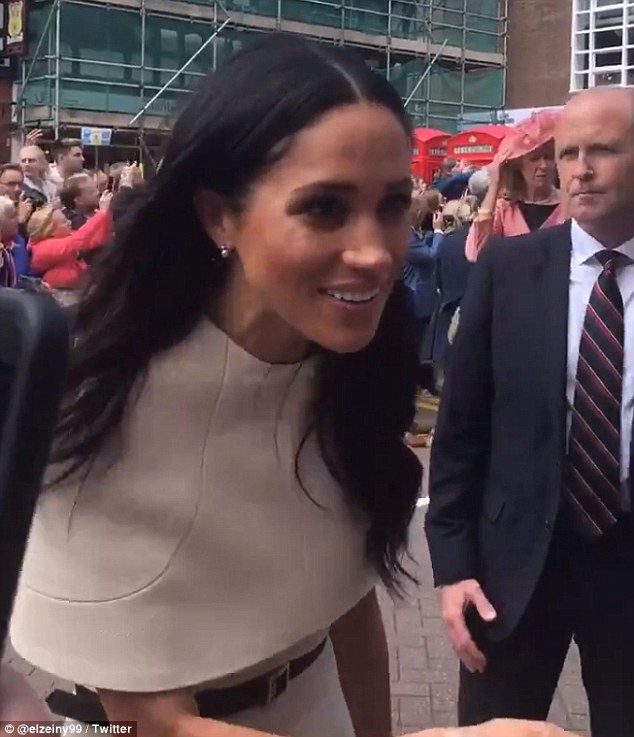 Hmm: The Duchess of Sussex’s posh way of speaking has some saying she has adopted a British accent, or at the very least losing her American one

There is no doubt that the Duchess of Sussex comes off as regal in the clip, but the audio has launched an international internet debate about whether or not she is using a British accent.

‘Meghan Markle speaking with a British accent now is WILDDDDD to me,’ a woman named Meg wrote, and she wasn’t the only one to take to Twitter to weigh in on the viral footage.

‘I just watched a video that showed Meghan Markle starting to have a British accent and I’m so here for it you have no idea,’ another person tweeted.

Some said Meghan was taking after Madonna, who famously adopted a temporary British accent when she moved to England with her then-husband Guy Ritchie. 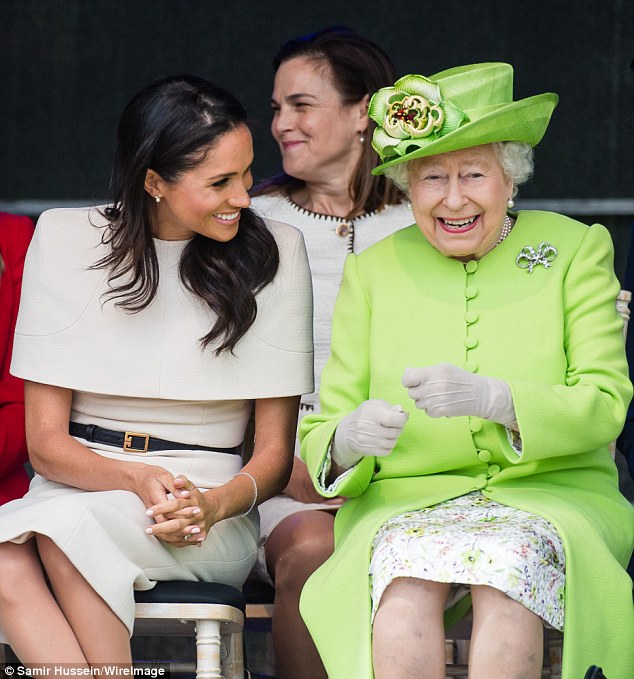 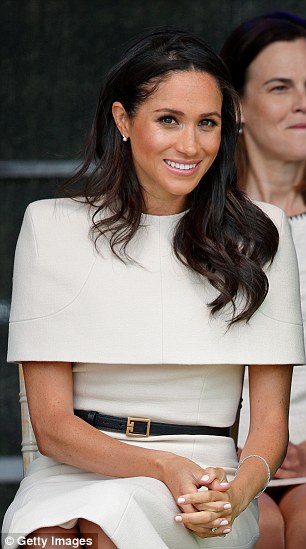 Debate: Some people called Meghan a ‘phony’ for using a British accent, while others insisted it is natural for her manner of speaking to change. Then there were those who didn’t hear it

Others brought up Lindsay Lohan, who made headlines in 2016 for adopting a bizarre European accent after spending the summer in Greece.

‘New flash of course #Meghan Markle [is] going to start sounding British. [She] is married to Prince Harry. Lindsay Lohan has an accent and she’s just Lindsay Lohan,’ a woman named Sophia said.

Do you think Meghan Markle is speaking with a British accent?

Do you think Meghan Markle is speaking with a British accent?

However, for all those who accused the new royal of being a ‘phony,’ there were people who argued it was natural for her to take on a British accent, or at the very least start to lose her American one.

‘People who are rolling their eyes have likely not moved or stayed long term in another country before,’ Teri Fikowski commented. ‘This isn’t that crazy & I doubt it’s phoney [sic].’

‘I don’t understand why it’s a big deal if Meghan Markle develops a British accent,’ a woman named Heather added. ‘1. She’s married to one. 2. She’s an actress and has probably taken lessons in accents. And 3. It’s a subconscious form of empathy.

There were also people who insisted that they didn’t hear any difference in Meghan’s manner of speaking, and they may be correct. 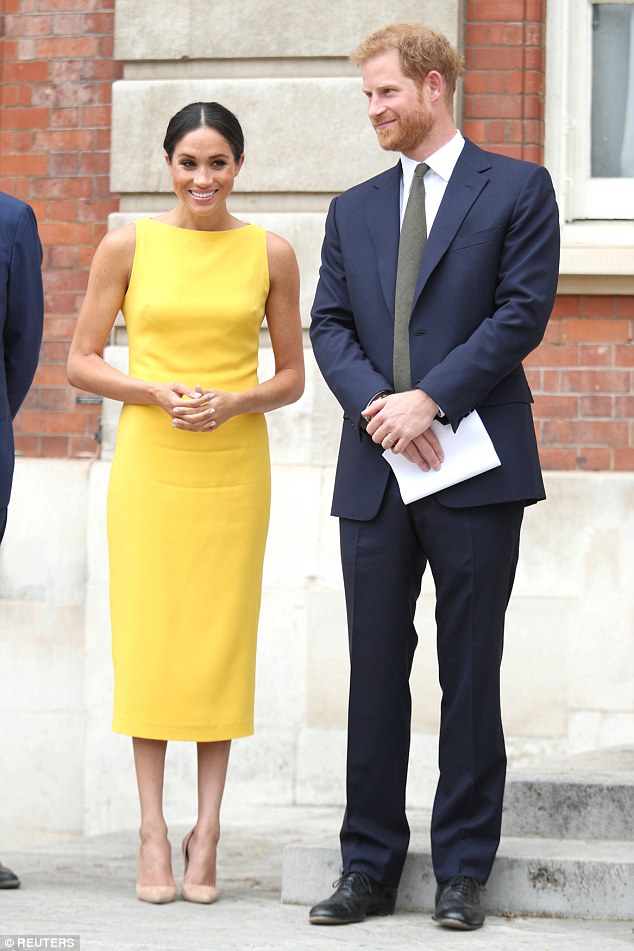 Royal couple: Meghan, 36, and Prince Harry, 33, attended the Your Commonwealth Youth Challenge reception at Marlborough House in London on Wednesday

Dennis Preston, a regents professor of linguistics at Oklahoma State University, told Yahoo Lifstyle that he didn’t detect a British accent when he watched the video.

‘I did a very careful listen, paying specific attention to her vowels, a big giveaway with British accents, as well as the intonation. I just didn’t find anything resembling a British accent,’ he said. ‘There’s nothing there.’

According to the linguistics expert, the brain tells us what to hear, so people hear what they expect to hear rather than what they actually do.

‘She married an Englishman, she lives in England, she’s hanging with the queen, and people think, “Gosh, she must be doing something with her language,”‘ he explained.

‘It’s your brain playing a trick on you.’ 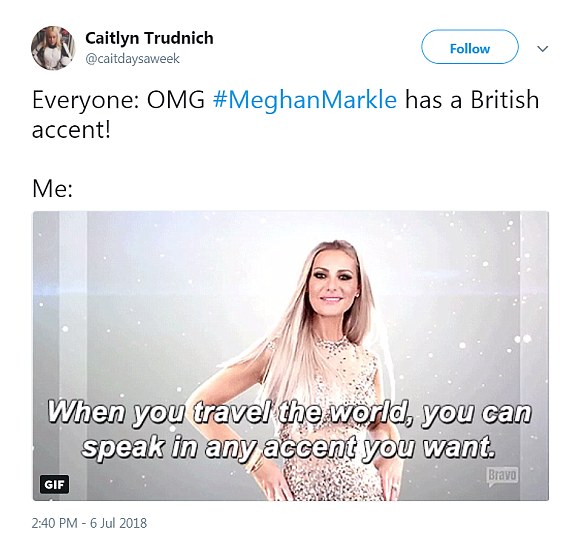