‘The dinner party from hell!’ The Split viewers are left delighted after drunken sister spills her family’s secrets in explosive scenes on glossy BBC drama

Viewers of BBC’s The Split were left delighted when a drunk sister spilled her family’s secrets in an explosive dinner party scene that echoed the infamous Doctor Foster finale.

The fourth episode of the legal drama centred around the hacking of an illicit dating website called ‘Indiana Ray’, not dissimilar to the real-life Ashley Madison data leak a few years back.

While the lawyers fought to secure top name clients, including the foreign secretary who wanted to divorce her husband who was on the list – the Defoe family were going through their own problems.

As youngest sister Rose battled with cold feet ahead of her wedding, they held a dress rehearsal dinner where older sister Nina got extremely drunk and spilled her family’s secrets in front of the in-laws.

Viewers took to Twitter in delight as the drama kicked up a notch, branding it ‘brilliant’ and ‘intense’. 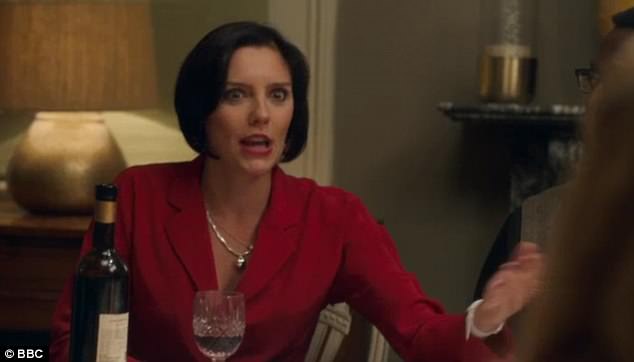 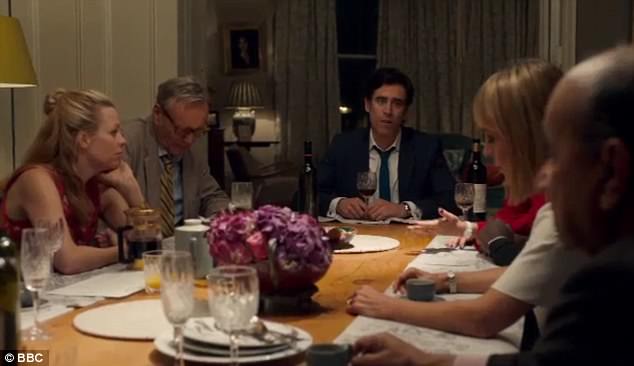 After knocking back a few glasses of wine, she revealed that her sister’s husband Nathan (centre back) had tried it on with her 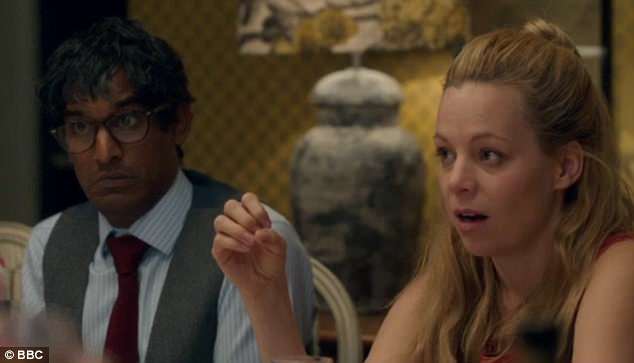 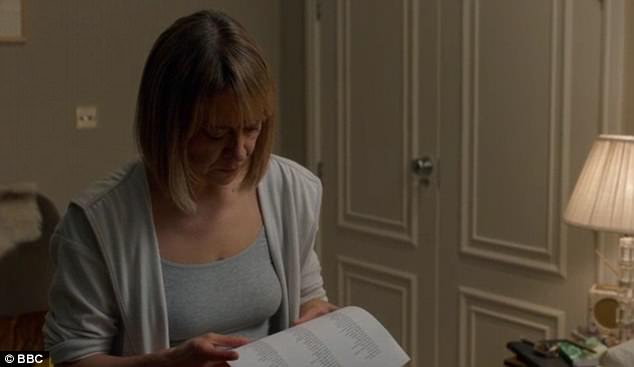 One viewer wrote ‘Well. That escalated’, while another described it as a ‘dinner party from hell’.

A number of fans compared the scene to the infamous scene in series one of Doctor Foster, when the GP revealed at a dinner party that her husband had been cheating on her.

Making the comparison, one Twitter user commented: ‘Whoah that dinner party scene was like Doctor Foster levels of revelations!’

In the final scenes of Tuesday night’s episode of The Split, an inebriated Nina dropped the bombshell that Nathan, her sister Hannah’s husband, had hit on her, which viewers saw in last week’s episode. 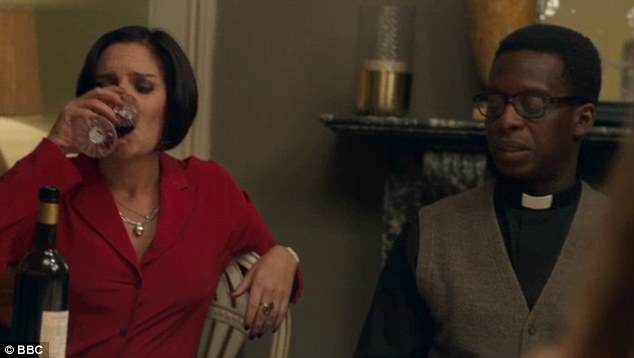 Nina knocked back the drink in front of her sisters in-laws, the vicar and the rest of her family 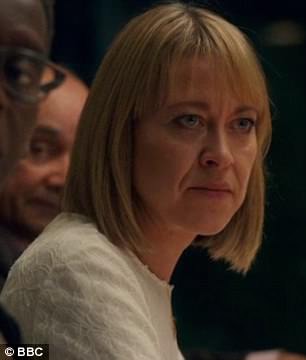 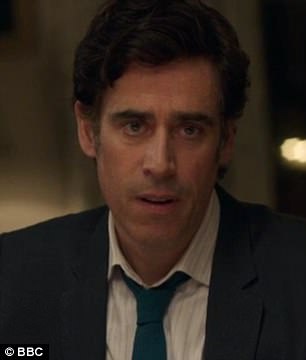 Hannah was left devastated about the news her husband Nathan had kissed her sister, and spoke about their sex life

Viewers were left thrilled by the dramatic scenes, with many comparing it to the infamous finale of Doctor Foster

Ranting that her younger sister Rose should reconsider her plans to get married because she didn’t have a good example from their parents she spilled too much.

‘Can we stop pretending in this whole pile of c***, because everyone is lying, even you Nathan. Did you tell her?

‘You put your hand on my a*** and said “why doesn’t she want to have sex with me anymore?”

‘Like I would have the answer. Why would I have the answer? I don’t know who I’m going to screw from one week to the next how would I know why Hannah doesn’t want to have sex with you anymore.’ 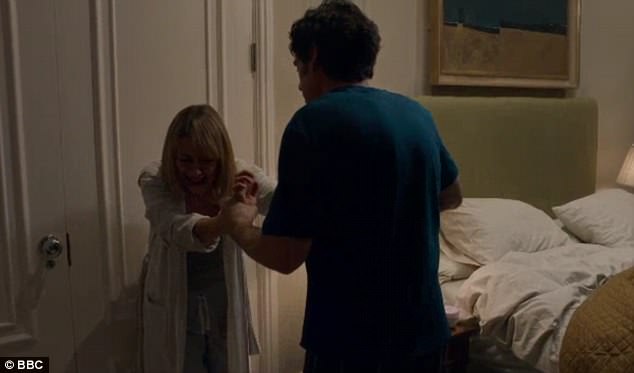 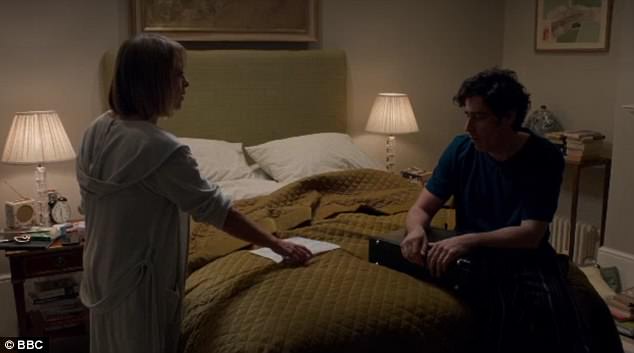 Nathan had more bad news for his wife, following the dinner party he told her that he had been on a dating site

Unable to stop Nina turned to her younger sibling: ‘I know you care about James, I know you do. But James, it’s just not enough to just get on top and hope she feels the same, no wonder you felt the vicar’s c***?’

Rose stormed out at the revelation, swiftly followed by Hannah, who fumed that her sister just wanted to hurt everyone.

But the drama didn’t end there for Hannah, she was left reeling when her husband revealed that he had been on the list that had been leaked earlier in the day.

Claiming that nothing had happened with another woman Hannah broke down in tears as her marriage began to fall apart around her. 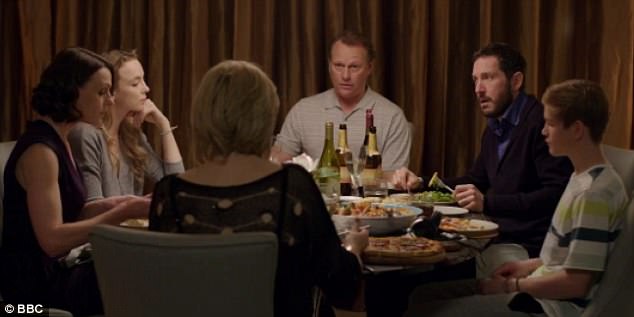 It’s a swift turnaround for the series which has had mixed reviews so far with ambitious storylines ricocheting between Hannah’s career, family life and the personal lives of her husband, children, sisters, mother and estranged father.

It also revealed more about the complex relationship between the couple whose divorce case underpins the show.

The Defoe sisters were still dealing with the discovery their mother had been hiding letters and presents their father had sent them in the 30 years since he left the family.

The Split returns to BBC One next Tuesday at 9pm.