Staring down the barrel of a landmark judgment on its workers’ status, Uber folds

Uber has settled a legal challenge that struck at the heart of its business model and could have resulted in its drivers and riders being classified as employees, after three Federal Court judges savaged the company's arguments at trial.

The delivery giant settled shortly after the hearing, avoiding the cost of having to pay its workers a minimum wage, comply with unfair dismissal rules and roster employees that could have come with a ruling its delivery workers are not independent contractors. 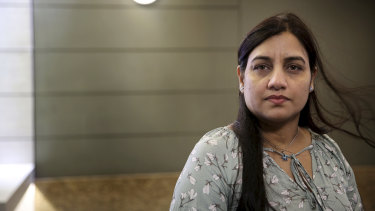 Amita Gupta won a settlement from Uber after she launched a landmark legal challenge.Credit:James Alcock

In a volley of critical questions, the judges said the trial was "not a debating club", Uber should stay "in the real world" and "everybody knows what function Uber plays" as the company's lawyers argued it was not an employer but merely a service that connected customers, deliverers, and restaurants.

Uber had already won twice in the Fair Work Commission in a case brought against it by Amita Gupta, an Uber Eats worker backed by the Transport Workers Union who claimed she had been unfairly dismissed when her Uber Eats access was cut off because of late deliveries. Mrs Gupta then appealed to the Federal Court, where she became the first person to receive a settlement from the company on the question in Australia after a trial at that level.

When the case was heard in November, Uber's lawyers were met with a series of disbelieving questions as they argued Uber was a platform, not an employer.

Justice Richard White expressed similar sentiments while he tried to pin down whether Uber saw its riders as independent contractors.

"Well, we actually operate in the real world here," Justice White said. "Judgments are practical things, especially in this context. This is not a debating club."

The case settled before the court could deliver its judgment but after the trial, where Uber was represented by a legal team from multinational law firm Ashurst.

An Uber spokesman pointed to a series of rulings by the industrial tribunal and an investigation by workplace watchdog the Fair Work Ombudsman that all found Uber's workers were not employees before the November trial.

"We welcome the resolution of this case and look forward to continuing our efforts to improve the quality of independent work in Australia," the spokesman said.

University of Sydney labour law academic Shae McCrystal said the judges' questions showed they were sceptical of Uber's claims, which she said had an "air of unreality".

"The fact that [Uber] spent so much money taking this up to the full Federal Court and then settled suggests they were very wary of the judgment," Professor McCrystal said.

Along with other gig economy companies, Uber has fought hard against efforts here and overseas to change its workers' status.

The industry spent about $US200 million in a successful campaign to persuade voters to overturn a Californian law at the recent United States election that would have classified its workers as employees.

An overwhelming majority of its riders and drivers liked the flexibility of being able log on and off as independent contractors, Uber's spokesman said.

Transport Workers Union national secretary Michael Kaine praised Mrs Gupta and her husband, Santosh, who declined to comment but made a donation to the union from the settlement, for taking on the legal challenge.

"They held Uber to account over the manner in which drivers are forced to wait for hours unpaid for work, to race around at risk to collect and deliver food and then to get sacked for being 10 minutes late," Mr Kaine said.