Prime Minister Scott Morrison says the states have had 18 months to get their hospitals in shape to deal with the era of living with COVID and they shouldn’t expect more money from the Commonwealth.

The warning from Mr Morrison follows his Health Minister Greg Hunt’s formal rebuffing of a request from the states for a funding injection as the nation starts to reopen. 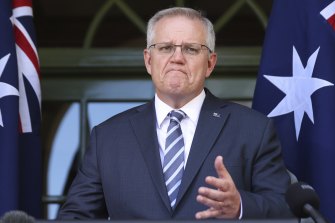 Prime Minister Scott Morrison says the states should have already prepared their hospital systems for a potential surge in COVID-19 cases.Credit:Alex Ellinghausen

Queensland has been leading the push for more money. Its hospitals are already straining under patient loads and doctors fear the system won’t cope if there’s a surge of COVID patients.

Peak doctors body the Australian Medical Association has also raised concerns the hospitals around the country will be overwhelmed with higher case numbers.

“The work that needs to be done and frankly should’ve been done for the last 18 months, in many cases I believe it has,” he said.

“We’re seeing stresses on hospital systems in other states and the territories which have nothing to do with COVID.”

The Prime Minister pointed out the outbreak in NSW didn’t result in the worst-case scenarios that had been modelled and demand in hospitals hadn’t surged as anticipated.

And he said Victoria, which is dealing with another wave of cases, had a strong plan for dealing with the surge in its hospitals and that was working well.

“New South Wales and Victoria have been able to plan for the COVID surge, they’re in the middle of it, they have the same funding arrangements as any other state and territory, but they’re dealing with it,” he said.

Last week, all eight jurisdictions wrote to Mr Hunt asking for an immediate injection of funding, saying they were under “unrelenting strain” because of coronavirus on top of already increasing demand for hospital services.

Queensland Premier Annastacia Palaszczuk has been the most strident on the demands, suggesting her state wouldn’t reopen its domestic borders if it didn’t get more money for hospitals. Mr Morrison has previously labelled that “shakedown politics”.

That state’s branch of the AMA says it’s not uncommon for patients to wait more than 24 hours to get a bed in emergency departments.

Mr Hunt replied to his state and territory counterparts on Wednesday to say the Commonwealth had already pumped more than $30 billion into the pandemic response. He made it clear the existing complex array of funding agreements would not be revised.